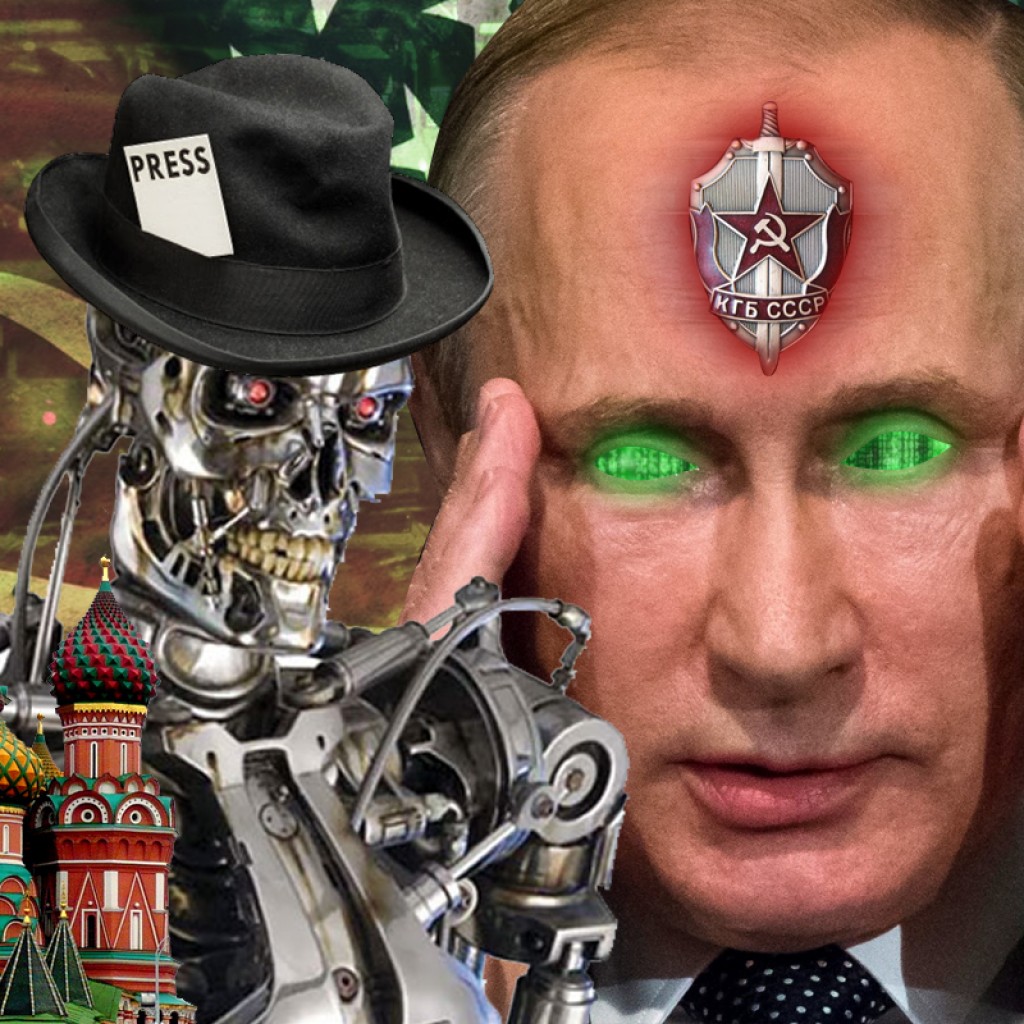 In the aftermath of President-Elect Trump’s surprise victory over establishment power’s chosen horse, Hillary Clinton, liberal punditry has compiled an impressive list of culprits responsible for this distortion in the fabric of American history.

Everyone from Vladimir Putin to BernieBros to Jill Stein are somehow responsible for obstructing the Pantsuit Khaleesi’s path to the Oval Office; faultless in her inability to use the near-infinite wealth and resources at her disposal to carry out a victory against a reality gameshow neofascist.

When the fourth estate loses its grasp over the pulse of America, and fails to provide answers for the misery millions of Americans face in their day to day toils for a system that actively disregards their despair, the people will look elsewhere. The rise of Breitbart, Alex Jones, and other misinformation despots say there is an answer – these demagogues paint a picture of nefarious masterminds who have manipulated America into servitude, and only you, the loyal viewers at home, are privileged to understand what is really going on.

This intoxicating melodramatic self-importance has driven people to what can only be described as a collective madness, as the recent “Pizzagate” melodrama has shown. Birthed from the Podesta emails provided by Wikileaks, Pizzagate recently came to a head with a man driving across three states with an assault rifle to shoot up a pizza shop only to discover there never was a secret Democrat pedophile child-trafficking cult in the first place – and now his former Internet comrades are labelling him a “crisis actor,” a magical explanation for all the world’s gun-related tragedies. If random people who never log off are taking their military-grade weapons and driving across three states to shoot up pizza parlors at the drop of a pin, shouldn’t there be a crusade against assault rifles or mental illness?

Instead, the current crusade is against “fake news:” those shady clickbait headlines flooding Facebook and other social media websites, making absurd claims backed by nothing, like DONALD TRUMP FUCKED A SPACE ALIEN AT AREA 51 and HILLARY WORSHIPS THE DEVIL IN SECRET PEDOPHILE RING. Other, more insidious falsifications include Trump keeping factory jobs in America with a simple phone call, when it was actually the work of unions. What makes this venture profitable is the mechanics of social media “sharing” combined with the bullshit economy of ad revenue for pageviews – which should have died a violent death a long time ago, and now we’re seeing the consequences come to fruition.

Worse yet, our youth have struggles telling the difference between fake news and reality. I could have told you this over a decade ago when I was in public school, getting into squabbles with fellow classmates who angrily insisted that Saddam Hussein was responsible for the attacks on September 11th. However, Facebook and the “Fake News” regime wasn’t nearly as prominent as it is now. So how did these young impressionable youth in deeply liberal Western Washington get this idea? Surely, this “fake news” must have come from somewhere?

Oh, right. It originated on NBC, more specifically Meet The Press on December 9th, 2001 – from the mouth of then Vice President Dick Cheney and  corroborated by host Tim Russert – implying that Iraq was hosting al-Qaeda training camps, among other false claims. This became one of the main justifications of America’s illegal devastation and occupation of Iraq, and over half the country was convinced Saddam Hussein played some part in the attacks on September 11th. Which of course, could be instantly disproved by anyone with a rough understanding of the politics of the Middle East – but the “Real News” brigade of respectable, esteemed, award winning journalists pushed this and other lies to manufacture the consent of the American public for yet another reckless military excursion causing the senseless death of devastation of countless lives. Somewhere between half a million to over a million people are counted dead in a conflict that achieved absolutely nothing of worth.

Not only conservative voices, but esteemed liberal voices such as Jonathan Chait and Tom Friedman pushed the case for war – Friedman himself said we needed to “burst that bubble,” and tell them to “suck on this.” Friedman was last seen crying in the New York Times about how millennials needed to “listen to the old spies,” you can probably find him now in some expensive Upper East Side apartment cranking his hog to vintage Tom Clancy novels, waiting for the 24 reboot to start. Chait proudly declared we should “give war a chance” in The New Republic back in October 2002. These were well-paid, award winning, respected opinion havers pushing a false narrative for war that has ended countless lives who will never have justice for what was done to them. Some might be brave enough to call this “a gross display of privilege,” more common people would simply refer to it as criminal.

Is it really that unbelievable that after this utterly avoidable and completely unnecessary shitshow, people might find themselves pursuing alternative sources for the news? Better yet, shouldn’t there be a cause for alarm that millions of adult Americans were led to believe fake news to push a very real real war with no end in sight, even when a President elected on a mandate to end it, manages to extend it indefinitely so that neverending, trillion dollar wars become the mundane?

More importantly, just who exactly defines “Fake News” at this point? The “Real News” has spent the past half a year or so trying to paint any and all opposition to Hillary Clinton as the work of the Kremlin, and just the other day the same publication that broke Watergate just pushed an anonymous blacklist with names like Robert Parry (broke Iran-Contra), Naked Capitalism (well-regarded by anyone in journalism when it comes to finance), and Robert Scheer (former target of the CIA), and Bruce Dixon (radical black leftist voice since the 70s) as agents of the Russian Government, calling for the United States Government to open a formal investigation for espionage.

The problem with such an absurd request is that the federal government is about to be led by an administration which includes an executive chair of the same media organization that helped drive someone to drive across three states with an assault rifle and threaten a pizza joint – Steve Bannon of Breitbart. If the Podesta Emails revealed anything about how political campaigns and the punditry colluded to push disingenuous narratives about Clinton’s primary opponent, Bernie Sanders (and his legion of “bros”), then it would be fair to presume Breitbart would essentially be the propaganda arm of the Trump Administration – the same website which hosts such eye-opening headlines like “Six Reasons Pamela Geller’s Muhammad Cartoon Contest Is No Different than Selma,” “Five Great Home Defense Shotguns For Your Christmas Wish List,” and “Milo Destroys Social Justice Warrior Who Says Trump Support Makes You ‘White Supremacist.” Shotguns and cults of personality – two sensational tastes that taste great together!

Ironically enough, while men like Parry and Dixon were exposing the abuses of the United States government during the Cold War, the Central Intelligence Agency was running Operation Mockingbird – a state sanctioned “fake news” scheme to forward the foreign policy interests of the same dullards who thought that after countless failed attempts to kill the late Fidel Castro, maybe it was worth one more shot? Oh, were you expecting Silicon Valley to save us? Google and Facebook have grown into influence peddling powerhouses, so don’t expect those mystical algorithms of pure reason and logic to contradict the needs of your favorite alphabet agencies.

Perhaps the answer lies back with our youth – if secondary school prioritized teaching children how perceived authorities like the news media, politicians, corporations, advertisements, and others with power, resources, and an agenda seek to deceive and manufacture consent – we could perhaps better intellectually arm our citizenry to reject the false promises of demagogues like Donald Trump, and not fall so easily for fake news that seeks to forward pointlessly destructive campaigns of misinformation. Of course, that might possibly delegitimize paid opinion havers such as Tom Friedman – and no, we couldn’t possibly have that. Besides, both Democrats and Republicans agree we should privatize all the schools and shove iPads into the hands of youth. Their future is a bleak vision where the only rule is “learn to code.”

On the other side of the legitimacy spectrum opposite from Friedman sit Alex Jones disciples who find a sense of security in beliefs such as an all-powerful globalist cabal controlling the world’s events & economy – to believe, in all their despair, that at least somebody is in charge, is far more palatable than accepting the reality of unyielding chaos and exploitation, to string together correlation into causation as affirmation and fortification of existing beliefs.

In the rapid-fire misinformation sensory overload that is getting your news through Twitter, it’s easy to see the similarities between the thought processes “George Soros funds every protester” conspiracy theorists and…Nobel laureate and New York Times columnist Paul Krugman, assigned with the simple task of being too smart to fall for this shit, pushing fake news like Jill Stein was the reason Trump was elected also Comey and the Kremlin plotted to rig the election for Trump on his personal Twitter account – which sits atop a network of over two million followers, many in influential circles. What separates the two is what makes them similar – wealth and prestige. For Krugman and many Hillary loyalists, it’s far more comforting to believe that the Kremlin rigged the election than to accept the chaotic reality that their view of the world is wrong, and that their wealth and prestige is well deserved for how right they are, much like the conspiracy theorist’s belief that their lack of it is due to shadowy forces at work, preventing the world from recognizing their brilliance.

On the opposite side of the legitimacy spectrum, Clinton loyalists’ rush to blame third party voters, Millennials, and the infinite power of the white working class’ magical racism for Trump’s victory fail to acknowledge the depressing truth: Donald Trump simply campaigned harder, against a deeply unpopular candidate whose campaign decided to play 12th-dimensional-chess via out-of-touch Twitter burns or simply not campaigning in places like the Rust Belt – which had sunk deeper into economic turmoil under the Obama Administration. The comfort of having some external, formless villain to blame for life’s onslaught of disappointments will remain ever more comforting than the depressing reality – a billion dollar campaign machine headed by rich old white people utterly out of touch with the average American ran a campaign for themselves. Donald Trump is a horrific rebuttal of the philosophy of meritocracy this country roots itself in. The “real news” is that voter turnout plummeted, because neither political party was interested in offering real solutions to the riptide of despair that non-millionaire America finds itself waddling deeper and deeper into.

The sad truth is that the real news is never as exciting as “fake news.” There’s no foreign supervillains (Putin), no evil political powerbroker pedophile conspiracies (Pizzagate), no Hollywood twists ending in bombastic shootouts. The machinations of misery – which can largely be filed under either greed, delusion, or incompetence – don’t inspire snazzy headlines or offer easy solutions. The sinking feeling of chaos, the unyielding uncertainty – they burden the mind in unhealthy ways, with no real outlet for anger. One has to wonder if it’s easier, living life like the Pizzagate fanatics, making death threats at random pizza restaurant employees.

But what do I know? I’m just a Russian agent who has a side hustle taking small-time crisis acting gigs, obviously. Blame the gig economy.