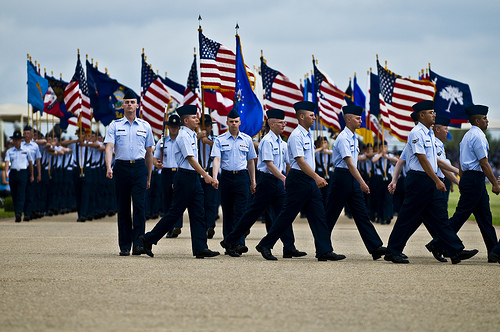 MEDIA ROOTS – One in five women in the U.S. Armed Forces is sexually assaulted, but most do not report these despicable acts.  Two weeks ago, U.S. Air Force General Edward Rice held a press conference regarding allegations of sexual assault at Lackland Air Force Base, where all Air Force enlisted trainees undergo Basic Military Training (BMT).  After listening to General Rice adroitly muffle concern and dodge responsibility, it is important to clarify precisely how he fails to understanding the trainee mindset, refuses to investigate sexual assault comprehensively, and likely will not hold himself accountable.

General Rice, Commander of Air Education and Training Command (AETC), fails to understand the mindset of enlisted trainees.  When in BMT, one’s overarching priority is to complete training on schedule and with all due haste.  Most often, this requires maintaining a low profile, “blending in,” or avoiding the training instructors’ ire.  Trainees fear any circumstance leading to being “recycled” or “washed back,” which could add weeks to a trainee’s BMT experience.  This fear is one reason why trainees do not speak up.  As disturbing as it sounds, trainees weigh the costs and benefits: speaking up, seeking administrative attention, enduring even more time in BMT, and starting an Air Force career with clerical paperwork vs. bottling up, suppressing sexual incident(s), and perhaps seeking redress later on.  Addressing this reality may involve affording victims all psychological and physical help while simultaneously allowing them to progress in training at their own pace and comfort.

General Rice also needs to focus on another distressing aspect of the trainee mindset, the nuances of which a former Marine drill instructor explains:

“You cannot do anything without requesting permission from your drill instructor…  You are literally in many cases a robot waiting for permission to take a step.  And if you have that relationship which is based on fear and intimidation… if that’s the person you’re asking help from, it becomes a very bizarre scenario…  You are subject to every single order that comes out of that instructor’s mouth.”

While Marine and Air Force basic training environments differ in many respects, the underlying point is clear:  it is incredibly difficult to seek help as a trainee after a sexual assault, due in part to the very nature of the trainee-instructor relationship.  This relationship is vital for training purposes, but impedes justice and administrative recourse in certain circumstances.  General Rice believes an existing system of “comment sheets” and anonymous “comment boxes” provides each Air Force trainee with the outlet they need.  Unfortunately, fear of an extended duration in BMT often stifles trainee recourse to comment sheets.  Rice must examine how to alleviate such a destructive mentality without compromising the caliber of existing Air Force training.

“I indicated we had 12 instructors that are under investigation…  Nine of those 12 were in one [squadron].  We have a total of nine squadrons, and nine of them came from one squadron.  So in my assessment to this point, it is not an issue of an endemic problem throughout basic military training.  It is more localized, and we are doing a very intensive investigation on that squadron to find out what exactly happened and why.”

General Rice, whose academic credentials boast multiple graduate degrees, could surely fathom a reality in which numerous victims of sexual assault exist across AETC and the operational Air Force.  For Rice, it’s far easier to blame a localized problem at the squadron level than engage in institutional introspection or examine the culture over which he reigns.

If recent history is any indication, General Rice and senior Air Force officers will not be held accountable.  After the Abu Ghraib torture scandal, a dozen lower-enlisted service members were punished but only one general was reprimanded.  After repeated Afghan civilian deaths under General Petraeus’ command, no U.S. general was disciplined.  These are dismal precedents.

In 2008, Defense Secretary Robert Gates fired the two most senior Air Force leaders for mismanagement of nuclear weapons.  Although their indiscretions led to no casualties, Gates recognized the imperative of holding senior Air Force officials accountable.  The standing lesson is clear: senior officials who endanger lives with nuclear weapons get fired, while those who oversee a ruinous culture of endemic sexual abuse survive without a scratch.  To right this wrong, Defense Secretary Leon Panetta must ask for General Rice’s resignation along with all relevant officers in the AETC chain of command.  All forms of punishment are available when reprimanding the abusers, their immediate superiors, and their entire chain of command, including reduction in rank, forfeiture of pay, confinement, and imprisonment.

General Rice has failed in his duty by misunderstanding the trainee mindset, avoiding a comprehensive investigation of sexual misconduct, and evading punishment.  Although administrative accountability doesn’t ease the pain of victimhood, it sends a firm message to every soldier, sailor, airman, and Marine: sexual assault will not be tolerated in the U.S. military, and every link in the chain of command is responsible for enforcing this.  The tragedy of sexual assault is deafening; a catastrophe which numerous military members endure through no fault of their own.  This is a defining time for Pentagon leadership to prove its mettle.