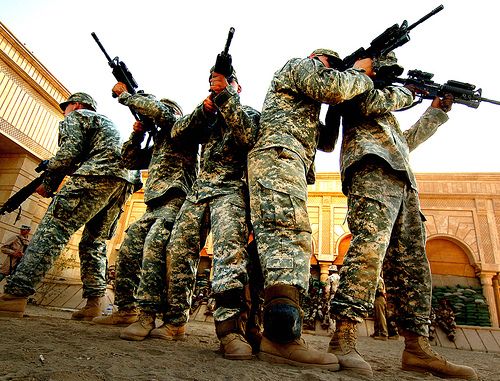 MEDIA ROOTS- In recent months, much has been made of the ‘withdrawal of US combat brigades from Iraq.’ The language used implies that a great benchmark has been reached in the march toward peace for our country.

Since the public was told that the combat soldiers are gone, there seems to be a consensus washing over the national consciousness that the Iraq War is nearly over. The truth is, despite the hype, little has changed in the nature of our mission or the geo-political situation. Our politicians and leaders seem to believe that all it takes is shifty worded rhetoric to change the game in the eyes of the public.

The idea of an ending war is encouraged by reports of ‘non-combat’ troops replacing combat brigades. Yet, there is no such thing as a non-combat soldier. There are non-combat jobs within the Army, but every person who dons the uniform, with the exception of a chaplain, who must remain unarmed under Army regulations, is expected to take up a weapon and dodge bullets when the going gets tough. In a war zone where the enemy attacks our presence indiscriminately, any file clerk or staff officer could end up under fire and returning it. When we have a 50,000-strong military presence in a country, conducting patrols, manning guard posts, taking fire and facing bombings, we are, by definition, in a state of combat. The Army leadership and Commander-in-chief know this.

According to Joshua Keating of Foreign Policy, on August 3rd–

And of course, as Gen. Ray Odierno, the outgoing U.S. commander in Iraq, recently pointed out, “as we moved away from combat operations, the enemy has not.” Even if the U.S. combat role has been reduced, U.S. facilities and patrols will still come under attack and need to be defended. The threat of insurgent attack certainly distinguishes the “noncombat” garrisons in Iraq from those in South Korea and Germany. (Thankfully, U.S. troop fatalities are now down to below 10 per month from a high of nearly 70 in 2007.)

So while the next stage of the Iraq war may be, as Obama described it, a transformation from “a military effort led by our troops to a civilian effort led by our diplomats,” the actual mission of the remaining troops will stay largely the same: building the capabilities of the Iraqi military and rooting out the extremists.

The scope of that mission will certainly change as troop levels continue to decline, though of course this isn’t the first time a president has declared an end to “combat” in Iraq.

I have a friend in Iraq who just began his deployment, serving as combat infantry. The stated mission is to train and support the Iraqi forces. However, we know this is how Vietnam began, with “military advisors” to the South Vietnamese Army, who soon were in full combat. Regardless of the drawdown, we have soldiers in harm’s way on foreign soil, taking casualties every month from enemy activity. When General Odierno acknowledges that combat isn’t over, the Administration’s announcement to the contrary becomes a mockery of itself. After all, it was two days following Obama’s announcement that our combat role had ended in Iraq that American blood was spilled.

Remember President Bush’s “Mission Accomplished” speech, and the declaration of the “end of major combat operations”? That was in 2003, and by the 2006-7 Iraq surge, pundits and people at large were mocking that rash and incompetent gesture. This year we’ve been told all “combat” troops are leaving, and as the year ends, the Secretary of Defense is forcing the window back open.

According to a recent AP article Gates: US open to request from Iraq to stay–

The United States is open to the idea of keeping troops in Iraq past a deadline to leave next year if Iraq asks for it, U.S. Defense Secretary Robert Gates said Tuesday.

“We’ll stand by,” Gates said. “We’re ready to have that discussion if and when they want to raise it with us.”

Gates urged Iraq’s squabbling political groups to reconcile after eight months of deadlock. Any request to extend the U.S. military presence in Iraq would have to come from a functioning Iraqi government. It would amend the current agreement under which U.S. troops must leave by the end of 2011.

“That initiative clearly needs to come from the Iraqis; we are open to discussing it,” Gates said.

I won’t disobey a lawful order from the Commander in Chief, but I also don’t have to buy bullshit. And I certainly won’t buy it in bulk.

The Iraq War is not over, and the soldiers know it. Our friends back home need to know it too. No place on earth where US soldiers are killed in violence on a monthly basis is a non-combat zone. We cannot take the Executive branch at its word on this. While the media feeding frenzy around the “withdrawal of combat troops” did not last long, it served as a propaganda piece, a pittance to the civilian population yearning for an end to the war. I won’t say whether staying or leaving is wrong, but deliberate doublespeak from the White House is wrong. Implying that we’re coming home when we so clearly aren’t, then leaving the door open for further involvement, is not only dishonest, but also a betrayal of the President’s campaign promises.

The reality is that our 2008 Presidential “choice” was between a Republican who wanted to keep forces on the ground indefinitely, pending certain goals; and a Democrat who would keep forces on the ground to avoid a disastrous (and embarrassing) collapse of the Iraqi nation, while accepting a Peace Prize for his non-existent peace achievements. I’d guess Alfred Nobel wants his money back.

We shouldn’t forget what the President had to say in August, on the heels of his acclaimed withdrawal of “combat” troops: “Like any sovereign, independent nation, Iraq is free to chart its own course. And by the end of next year, all of our troops will be home.

Make it so, Mr. President. An open-ended offer to the Iraqi government to extend our military presence does not meet that goal.

Our Chief Executive is trying to take credit for ending a war his administration is continuing. He cannot expect to blow both hot and cold without stoking the anger of the American people, and paying the price in votes.

I challenge the same Americans who came out in force against Bush’s War, on the streets and at the polls, to do the same in defiance of Obama’s War. Americans have voted in a trend for change in 2006, 2008, and 2010. Incumbents have been hemorrhaging from both parties for four years. Are we realizing now that change doesn’t come from just one pull of a lever?

I am a junior enlisted man in the US Army and serve as an aviation mechanic. I have never been deployed. My unit is currently slated for an Afghanistan deployment in the not-too-distant future, but this is subject to change. I care about our country’s future because, well, we live there, and because our Constitutional government is/was the pinnacle of human achievement in the centuries-old struggle between freedom and tyranny. We’re losing it, and that would be a crime against all those who labored and died for it, and against the billions of our children who will live with the consequences if we fail.

One thought on “MR Original – Scaling Down? Think Again.”