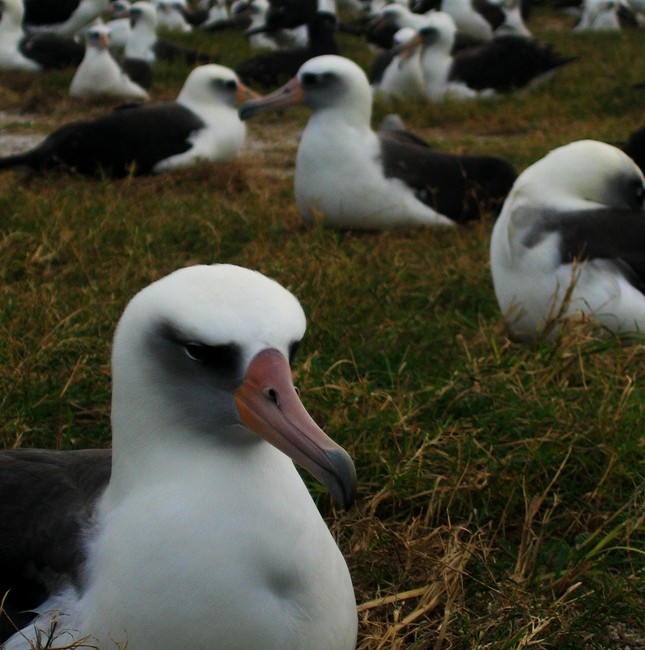 Surrounded by thousands of miles of Pacific Ocean, the majestic Laysan Albatross birds nest on islands forming the Midway Atoll, located at the northwest point of the Hawaiian Archipelago. This unique wildlife refuge is home to 71% of the world’s Laysan Albatross population and therefore is critical to their survival.

On Midway island, albatross live a delicate life. They typically mate and nest for the first time between the ages of five and eight. Each time they do, they hatch a solitary chick that requires constant care from both parents to stay alive.

Sadly, the deadly consequences of human overconsumption have turned the once densely albatross populated region into a mass graveyard. Like many fragile ecosystems on earth, plastic pollution in the ocean has greatly hindered this species’ survival.

One of the primary sources of albatross food is flying fish eggs, which lay in strings that attach to floating plastic in the ocean. Due to this consumption, it’s estimated that 98% of all Laysan albatrosses have varying degrees of plastic in their digestive systems.  Every year, four out of ten albatross chicks die from a variety of deadly health conditions including starvation, dehydration and obstructions of their digestive systems – all as a result of plastic ingestion. These regal seafaring birds are helpless victims, dying by the thousands every year as a result of this toxic pollution.

To get a sense of the magnitude of this tragic phenomenon, check out photographer Chris Jordan’s stunning report on the plight of Midway albatross:

To even begin to take on this problem we must first be willing to understand the degree of damage plastic pollution does. This non-biodegradable substance makes up 90% of ocean debris, and comes in a multitude of forms including medical garbage, bottles, bags, toys, bottles caps and plastic micro particles. 20% of this waste comes from private and commercial ships, fishing equipment, oil platforms and spillage from shipping containers, while the remaining 80% originates on land.

Thousands of tons of plastic ends up in streams, rivers and reservoirs. Eventually, it finds its way to the oceans resulting in plastic flotillas piloted by ocean winds and currents. The remainder will either sink to the bottom of the ocean floor or end up in an ocean gyre, a vortex where the debris becomes trapped. So far, one of the biggest areas of accumulated garbage is in the Pacific Ocean, also known as the ‘Great Pacific Garbage Patch’ although there are five major ‘garbage patches’ in our oceans today.

The Laysan Albatross is certainly not the only marine species endangered as a result of human pollution, but it is one of the most uniquely affected by it. Obviously we as individuals don’t have the resources to clean up the oceans. But we can become active citizens by promoting a healthy and sustainable lifestyle, while demanding that policy makers and corporations mandate the same through their laws and products.

We can commit to purchasing reusable grocery bags, reusable water bottles, eliminating styrofoam and non biodegradable storage containers from our lives as well as support politicians and local legislation that enforces environmental protections. We may not be able to undo the damage we’ve already caused to our oceans, but with commitment and dedication to a cleaner planet we can make sure we do not cause further, irreversible destruction.

As a global community, we must learn to share the planet with all species to sustain ourselves and future generations. We can make a difference, for the albatross and for all the wondrous creatures that inhabit our planet. In fact, our survival depends on it. As Jacques-Yves Cousteau once said: “For most of history, man has had to fight nature to survive; in this century he is beginning to realize that in order to survive he must protect it.”

If you would like to learn more about Midway Laysan Albatrosses and show your support, please check in and follow Wisdom on her facebook page.  Wisdom is the oldest known Laysan Albatross, first banded in 1956 when she was estimated to be 5 years. Wisdom turned 62 this year and once again nested and raised a chick, Wonder, in February. 2013.