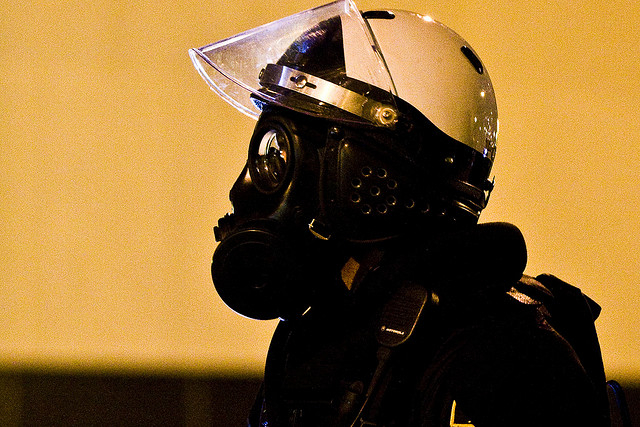 Housing discrimination against African-Americans, also known as redlining, has long been a form of institutional racism in the post Jim Crow era.

Under the Federal Housing Act, federal loans were systematically denied to African-Americans, which helped create ghettos and further segregated blacks from whites. Ferguson is just one example among many which employed the practice.

The latent effects of racism are rooted throughout Ferguson. 93% of drivers arrested are black, yet only 67% of the city’s population is black. One-quarter of the town’s revenue is due to fines issued by a police force that disproportionately targets African-Americans.

There are unabashedly racist cops, like police lieutenant Hayes, who ordered officers to racially profile minorities. According to a whistleblower, Hayes said things like “let’s have a black day” and “make the jail cells more colorful.” Adding insult to injury, the police broke the law while investigating him.

With this reality in mind, fatal police shootings of black teens like Mike Brown are bound to happen.

The mass protests in Ferguson caused Amnesty International to make an unprecedented deployment of observers to the streets, including Jasmine M. Heiss, who told Media Roots that “Ferguson has sparked an intense and overdue conversation about race and justice in the United States.”

Heiss also witnessed the racial divide created in the West Bank, where Jewish settlements and surrounding Palestinian population had been segregated by walls and checkpoints. While illegal settlements in Hebron enjoyed basic necessities, Palestinians were denied access to human rights like water. After witnessing numerous arrests of journalists and peaceful protesters amid the tear gas, rubber bullets and sound cannons in Ferguson, Heiss said she felt like she was back in the West Bank, noting the striking similarity between the two cities in their militarized crushing of dissent.

Journalist Max Blumenthal has documented this parallel, underscoring how Israeli security state tactics have been outsourced to the US in a trend he calls the “Israelification” of American police forces. In fact, according to Electronic Intifada’s Rania Khalek, “at least two of the four law enforcement agencies that were deployed in Ferguson—the St. Louis County Police Department and the St. Louis Police Department—received training from Israeli security forces in recent years.”

Enforcing security based on racist ideology has long been field tested by Israel, which uses Palestinians as lab rats before outsourcing its defense and intelligence capabilities to other world powers. Whether it be Israeli forces training ICE officers in Tacoma, outsourcing a Behavior Pattern Recognition security system for US airports, or intelligence contractor Elbit Systems winning multimillion dollar contracts to patrol the US-Mexico border, Israel’s idea of security has now become America’s. As a result, Big Brother’s gaze is discriminatory, and racial minorities are unfairly targeted by the system.

When the state engenders unjust policies like those epitomized in places like Ferguson, the press has a duty to engage, raise awareness and advocate the reinstatement of justice. Standing in solidarity with the oppressed and amplifying the plight of the voiceless is the primary function of the Fourth Estate. Unfortunately, the police state has appropriated the corporate press and criminalized journalists who challenge systemic injustices.

In response to the police killings of Mike Brown, Ezell Ford and Eric Garner, activist groups like Black Youth Project 100, the Dream Defenders and the Million Hoodies Movement for Justice, have gained traction. To be sure though, the Defense Department has been anticipating the growth of such activism, whether it be Muslims in Michigan, blacks in Ferguson, or any other minority group which could “threaten social unrest.”

In a four-part series for Occupy.com, Dr. Nafeez Ahmed unveils a government data-mining project dubbed The Minerva Initiative. Under the guise of enhancing the drone Kill List and targeting American-Muslims that have the “potential to become terrorists,” the flawed algorithms used to search out ‘terrorists’ abroad are now being retrofitted to seek out political dissidents on US soil.

Ahmed details how a nexus of metadata and social media are being used by the Pentagon to develop a “radicalism scale” for potential social uprisings in the US, and the unconstitutional spying operation is being aided and abetted by Universities like Arizona State and the University of Washington. Effectively, social sciences are militarized with professors acting as spy proxies reporting back to their DC overlords.

One specific DoD project “seeks to uncover the conditions under which political movements aimed at large-scale political and economic change originate, and what their characteristics and consequences are.” As Ahmed states in an interview with Abby Martin, Ferguson is an example of what the Minerva Initiative sets out to suppress.

Even more disturbing, the use of predator drones on American soil is a real possibility considering the direct correlation between data-mining and extrajudicial executions. If current trends continue, American skies could soon be populated by drones targeting and potentially even executing non-violent activists.

Given the aggressive characteristics police displayed during Occupy Wall Street and Ferguson combined with the Pentagon’s intent to seek out and destroy potentially “threatening” movements, the War on Terror has officially come home to roost.

One thought on “War on Terror Comes Home to Roost: The Security State’s Plans to Crush Activism”