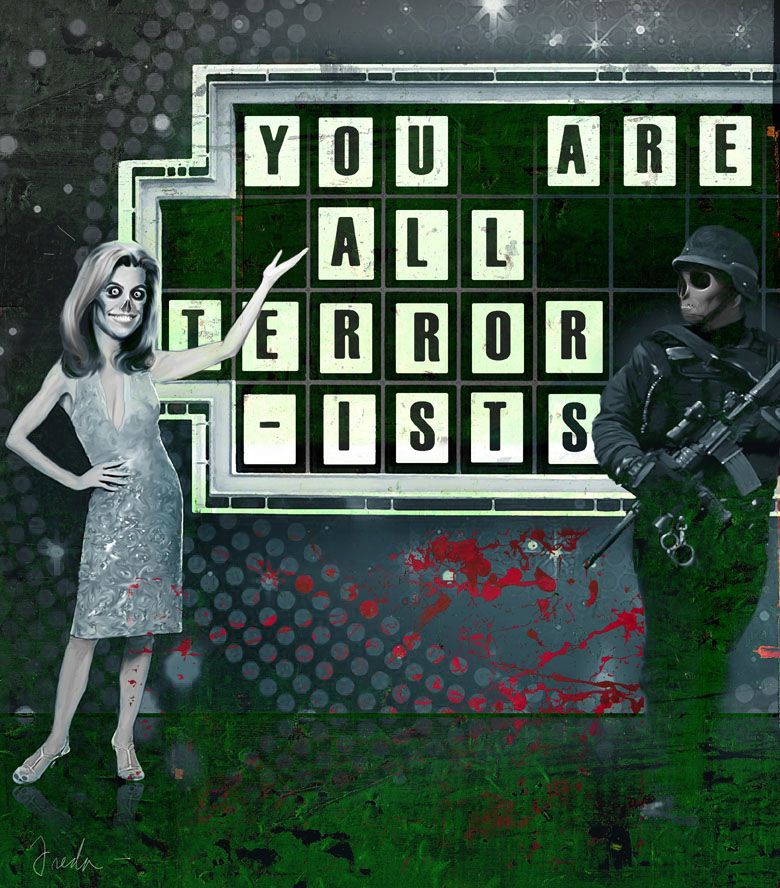 The Western media analysis of the Israeli invasion into Gaza dubbed ‘Operation Protective Edge’ has been totally one-sided in its support of Israel. Although there are hundreds, perhaps the most glaring example to date is the IDF shelling of four boys on the beach in Gaza City.

Award-winning journalist and NBC foreign news correspondent, Ayman Mohyeldin, was on the ground when the strike occurred and documented it in harrowing detail. As Glenn Greenwald reported:

“Mohyeldin recounted how, moments before their death, he was kicking a soccer ball with the four boys, who were between the ages of 9 and 11 and all from the same family. He posted numerous chilling details on his Twitter and Instagram accounts, including the victims’ names and ages, photographs he took of their anguished parents, and video of one of their mothers as she learned about the death of her young son.”

Several international, award-winning journalists corroborated the deliberate strike, which amounts to a war crime. Excellent and crucial reporting aside, in the wake of his report, Mohyeldin was suddenly pulled from Gaza. NBC cited security concerns, yet immediately replaced him with foreign news correspondent, Richard Engel. Mohyeldin was removed from his post because his reporting didn’t fit the narrative, as Greenwald underscores:

“Over the last two weeks, Mohyeldin’s reporting has been far more balanced and even-handed than the standard pro-Israel coverage that dominates establishment American press coverage; his reports have provided context to the conflict that is missing from most American reports and he avoids adopting Israeli government talking points as truth.”

Rula Jebreal is another example of corporate media benching reporters for not toeing a pro-Israel bias, whose contributor title was dropped and all scheduled appearances cancelled by MSNBC for speaking out about the absence of Palestinian voices on the network.

In light of the rampant disinformation pumped by major news stations (only five corporations control 90% of what Americans see, hear and read), people are largely ignorant to the facts on the ground. Government talking points are repeated throughout the Internet, infecting the masses with further disinfo. Even worse, such warmed-over propaganda often flies under the guise of objectivity and reason.

A perfect example is a recent op-ed by Ali A. Rizvi on Huffington Post, which appears fair by denouncing the lack of objectivity in media:

“Are you ‘pro-Israel’ or ‘pro-Palestine’? It isn’t even noon yet as I write this, and I’ve already been accused of being both…to come down completely on the side of one or the other doesn’t seem rational to me…That however we intellectualize and analyze the components of the Middle East mess, it remains, at its core, a tribal conflict.”

Unfortunately, at the core of this seemingly unbiased argument is an unwavering support for the occupation of Palestine.

“Why are people asking for Israel to end the ‘occupation’ in Gaza?…Because they have short memories…In 2005, Israel ended the occupation in Gaza. It pulled out every last Israeli soldier. It dismantled every last settlement. Many Israeli settlers who refused to leave were forcefully evicted from their homes, kicking and screaming.”

Rizvi’s appeal to emotion is nothing but an attempt to persuade the reader to invest in the idea that Israeli homes were wrongfully taken from them. But according to international law, the continuous settlement building and military occupation of both Gaza and the West Bank are illegal. UN General Assembly Resolution 194 issued a court order demanding Palestinian refugees to be able to return to their homes. The International Court of Justice, the UN General Assembly, and the United Nations Security Council all regard Israel as an illegal “Occupying Power,” as well as the official Israeli Sasson Report.

Specifically, the report uncovered a “secret cooperation between various ministries and official institutions to consolidate ‘wildcat’ outposts, which settlers began erecting more than a decade ago.” Such military outposts encroaching further into Palestinian land are anything but legitimate.

Rizvi also begins his timeline at 2005, ignoring how the military occupation has lasted over sixty years, dating back to 1948. A blockade of one’s airspace, borders and seaports is an occupation, one that’s being waged by an apartheid state armed with industrial warfare.

Here’s a thought experiment to emphasize the dreadful nature of a blockade after being ruled by martial law for nearly six decades. Imagine the following scenario from the Palestinian perspective:

After occupying your house for a few generations, here’s your keys back. Now I’ll just erect roadblocks outside your streets; build massive walls and checkpoint systems dividing your family and friends; rummage through everything before you buy it and put you on “diet” to keep you on the brink of a humanitarian crisis (Wikileaks).

Would you feel liberated?

Because of this missing context, the author inaccurately perceives this as an “Israeli-Palestinian conflict” – a false equivalency between the occupier and occupied. Instead, this is a state-sanctioned military occupation, financially backed by the US to the tune of three billion dollars a year. If this were an equal “conflict” between two legitimate states, you would see aid being provided both ways to quell the humanitarian crisis. Instead the US provides 8.5 million dollars each day to Israel while providing only a miniscule amount to Palestine.

If 1.8 million people are kept trapped in one of the poorest, densest regions in the world and subjected to constant policing and harassment, militant resistance against the occupiers will inevitably build. Hamas, an organization which arose in the eighties and was elected to govern the Gaza strip, must be seen in this context. Without justifying rockets launched by Hamas into Israel, it must be understood that Palestinian refugees in Gaza have been blanketly cast as detainees in an open-air prison – even worse, terrorists.

According to former Congressman Ron Paul, the US and Israel facilitated the rise of Hamas in order to counterbalance the power of Yasser Arafat and the Palestinian Authority. The US playbook of funding opposition groups is nothing new with its emboldening of both al-Qaeda and ISIS militias. If true, that fact alone warrants an immediate end to the blockade and US relief package sent to Palestinian refugees along with a fucking apology letter.

Moving on to the oft repeated meme that has been doggedly used in the media – the idea that Hamas hides behind its own people, AKA uses them as “human shields.”

Rizvi states that Hamas puts its civilians in the line of fire, but the only evidence he provides is a link to a Hamas spokesperson talking about individual Muslims choosing to willingly martyr for religious and spiritual reasons. This would suggest consent – a pretty crucial distinction. This stands in stark contrast to the narrative being waged in corporate media which asserts, without evidence, that Hamas is using unwilling subjects to hide behind and storing missiles in populated hospitals or schools. One promoted tweet by Israeli Prime Minister Benjamin Netanyahu even depicted a Hamas solider hiding behind an unsuspecting mother pushing a baby stroller. This is the epitome of agit-prop, where overly emotional arguments are used to demonize the enemy.

Not to mention how Israel is the last entity that should be pointing fingers, considering that between 2000 and 2005, the IDF admitted to using 1,200 Palestinians as human shields. After the Israeli High Court found the IDF’s use of them illegal, there are several instances where IDF soldiers continued to employ the tactic.

One must also understand the historical context of this term. Media Roots has reported an analysis of this oft-used phrase to smear one’s adversary in order to legitimize war. In almost every case, there is very little evidence proving the allegations.

Using this very notion as the backbone of his argument, Rizvi continues:

“…there is no justification for innocent Gazans dying…But let’s back up and think about this for a minute. Why on Earth would Israel deliberately want to kill civilians?”

I don’t know Mr. Rizvi – but when IDF forces have been found guilty of using innocent Palestinians as bomb sniffing dogs to clear buildings, speculating about Israel’s intent is immaterial. Accredited sources have reported that the IDF is using high grade weaponry like DIME micro-shrapnel and flechette shells against innocent civilians in Gaza, a weapon that indiscriminately shoots thousands of little metal darts. In previous sieges, Israel has used white phosphorus, a chemical weapon that burns so hot it can melt straight to the bone.

The US-backed Israeli apartheid state is ground zero in this battle. And in the same vein as Gandhi, Mandela and Martin Luther King Jr., nonviolent protest is a time-tested, worthy ally in the fight against corporate and state oppression.

One such method of resistance is the Boycott Divestment and Sanctions (BDS) movement that originated in Palestine, which aims to boycott, divest and sanction companies that profit off of the Gaza siege and occupation. BDS is the single-most important tool at our disposal, because we can fight back with our purchasing power – the same economic pressure that helped end the apartheid state in South Africa.

Ali Hasan Abunimah is a Palestinian-American leading the charge. In his book The Battle for Justice in Palestine he argues that the battle for independence will be won on college campuses. He writes:

“[The situation] is deteriorating in the West Bank with Israel’s relentless theft and colonization of land. It’s deteriorating in Gaza where the siege is even tighter than ever, where in recent days you see electricity being cut off once again and Israel closing the only food and fuel crossing into Gaza. And it seems to be getting worse in present-day Israel, where it seems every other week a new racist policy is passed–most recently the law to discriminate between Palestinian Christian and Palestinian Muslim citizens…So it’s not to discount the struggle people there are waging, but I wanted to focus on the fact that in the U.S. and other parts of the world, Palestinians are winning many battles, and Israel and the Zionist movement are really faltering in their efforts to win hearts and minds.”

A population of nearly 2 million, 40 percent of which are children are being terrorized by Israel on a daily basis, whether it be with checkpoints, house demolitions or warfare. After Operation Pillar of Defense (Israel’s 2012 bombing which paled in comparison to now), the rate of post-traumatic stress disorder (PTSD) among children doubled, according to the UN Relief and Works Agency. Only when Palestinians can be born with basic dignity and human rights can this terrifying cycle of violence come to an end.

For those interested in how to get involved in BDS refer go here.

One thought on “Wheel of Misfortune: Whitewashing Israel’s Terror Campaign”