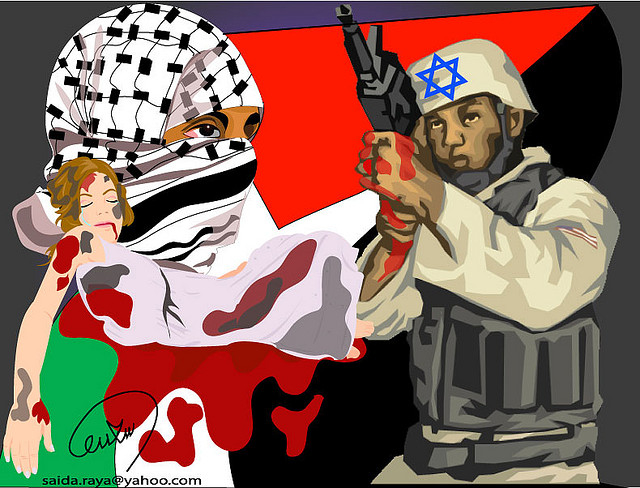 It’s been three weeks since Israel launched its bombing campaign and subsequent invasion of the Gaza strip. According to the Palestinian Health Ministry, over 1,500 Palestinians have been killed and over 6,500 have been wounded in what has become one of the bloodiest offensives ever launched in the region.

The overwhelming majority of casualties are civilians. On the contrary, three Israeli civilians have died due to Hamas launched rockets and 56 IDF soldiers have lost their lives. Over the last four days Israel has bombed more than 70 sites, including Gaza’s  power plant, the only provider of electricity to the 45 mile territory’s 1.8 million citizens. Additionally, Israel has targeted and shelled dozens of medical facilities, refugee centers and is wiping out entire families every day.

Yet despite the extreme disproportionality of this ongoing massacre, there are still thousands of people vehemently defending Israel’s right to self-defense. According to Israel and its defenders, the skyrocketing Gaza death toll should be blamed on the Palestinians for committing “self-genocide” by putting themselves in the line of fire. And the crux of this perversion of reality all stems back to one single, extremely loaded talking point: human shields. 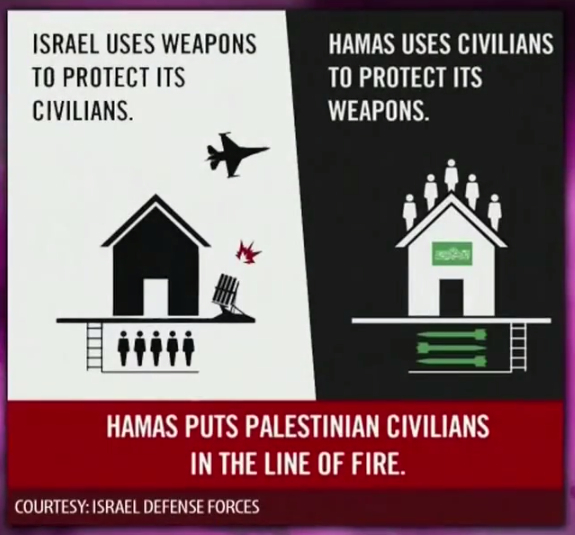 From speeches and media appearances to incessant info-graphics, the human shield claim has been used as the crux of Israeli propaganda to absolve its government of any accountability.

There’s only one problem. Besides rockets found in an abandoned school, there’s been no evidence to back up the claim that is regurgitated without question across the media establishment. The pro-Israel talking point has been so repetitive that some critics, like Max Blumenthal have sarcastically suggested that “Hamas must be hiding rockets inside Palestinian children.”

On the ground journalists have corroborated the baseless nature of this claim. According to an article titled the ‘Myth of Hamas Human Shields,’

“Some Gazans have admitted they were afraid of criticizing Hamas, but none have said they have been forced by the organization to stay in places of danger and become unwilling human shields…”

The unsettling reality is that for many Palestinians there is simply nowhere to go. The strip of land they live on is about 45 miles long and is one of the most densely populated places on earth. It’s borders are closed (immediately following the siege, Egypt closed it’s Rafah border crossing into the Gaza strip) and many people have made the decision to stay inside their own homes instead of trying to evade death on the streets.

Amazingly, despite the loaded term being parroted to absolve Israel of its blatant war crimes, one entity that has systematically used human beings as shields is Israel, and here are just three examples documented in the past five years:

Using human beings as shields or conducting military operations from civilian areas is an undeniably cruel and inhumane tactic that stands in violation of the Geneva Conventions, which is exactly why it’s consistently projected to demonize the enemy.

Other countless propaganda points have aimed to do the same from ‘these people cut people’s heads off’ in reaction to the Nick Berg beheading to ‘they throw acid in women’s faces’ in response to the acid attacks in the Muslim world.

The establishment wants you to look at these people, and think they want to die, they encourage death; they have such little value for life they actually shield themselves with other civilians, including children. It’s the oldest trick in the book to make people feel the massacre they’re sponsoring is justified. This is exactly what’s unfolding in Gaza, and as a result the indiscriminate bloodshed is not seen as horrendous or even deliberate by the majority of people. Instead it’s shrugged off as “what are coalition forces supposed to do when enemies are firing at them hiding behind civilians?”

Israeli society even has a word for this technique, Hasbara. In Hebrew it literally translates to “an explanation” but 972 Mag gives us the modern definition:

“A form of propaganda aimed at an international audience, primarily, but not exclusively, in western countries. It is meant to influence the conversation in a way that positively portrays Israeli political moves and policies, including actions undertaken by Israel in the past. Often Hasbara efforts includes a negative portrayal of the Arabs and especially of Palestinians.”

How Israel Uses Hasbara on Social Media to Legitimize Murder

This framework is used to build cases against nation states the US and Israeli government wants to topple. And the magical talking point is the enemy’s use of human shields.

One has to look no further than the infamous Bin Laden compound raid by Seal Team Six, where US officials claimed he was using his wives as human shields when he was shot. But when all was lied and done, officials were forced to admit that there was no use of human shields. In fact, according to the official narrative, the world’s most wanted man wasn’t even armed when he was allegedly executed.

Shortly after the Bin Laden raid, Pakistani Assistant Political Agent Javid Khan told the Inter Press Service “The [Taliban] militants [in Pakistan] have been using civilians as human shields.” Three years later, Khan would be accused of leading an armed militia into a Pakistani neighborhood which threatened an elderly woman at gunpoint.

But it’s not just Bin Laden and Pakistan. Nearly every major world conflict or war involving the US in the last 60 years has included this argument. In Libya, despite Gaddafi being boys with US politicians just the year prior to the NATO bombing campaign, the human shield talking point was used ad nauseum. Yet the only uncorroborated citation of this was through the same NATO supported rebel fighters that ultimately ousted Gaddafi, killing and sodomizing him with a metal pole.

Leading up to the Iraq war, Bush also included the human shield talking point as a main tenant of his campaign to oust Saddam. There is evidence of Saddam holding people hostage near military targets during the invasion of Kuwait. However, like much of the Bush era propaganda which inflated kernels of truth into a hysterical echo-chamber, little evidence exists of a systematic use of human shields during his reign. Of course, a lack of evidence didn’t stop Bush’s cabinet from fear-mongering the world about Saddam’s allegedly long history of devaluing human life through the use of human shields or gassing his own people by weapons provided to him by the US government. 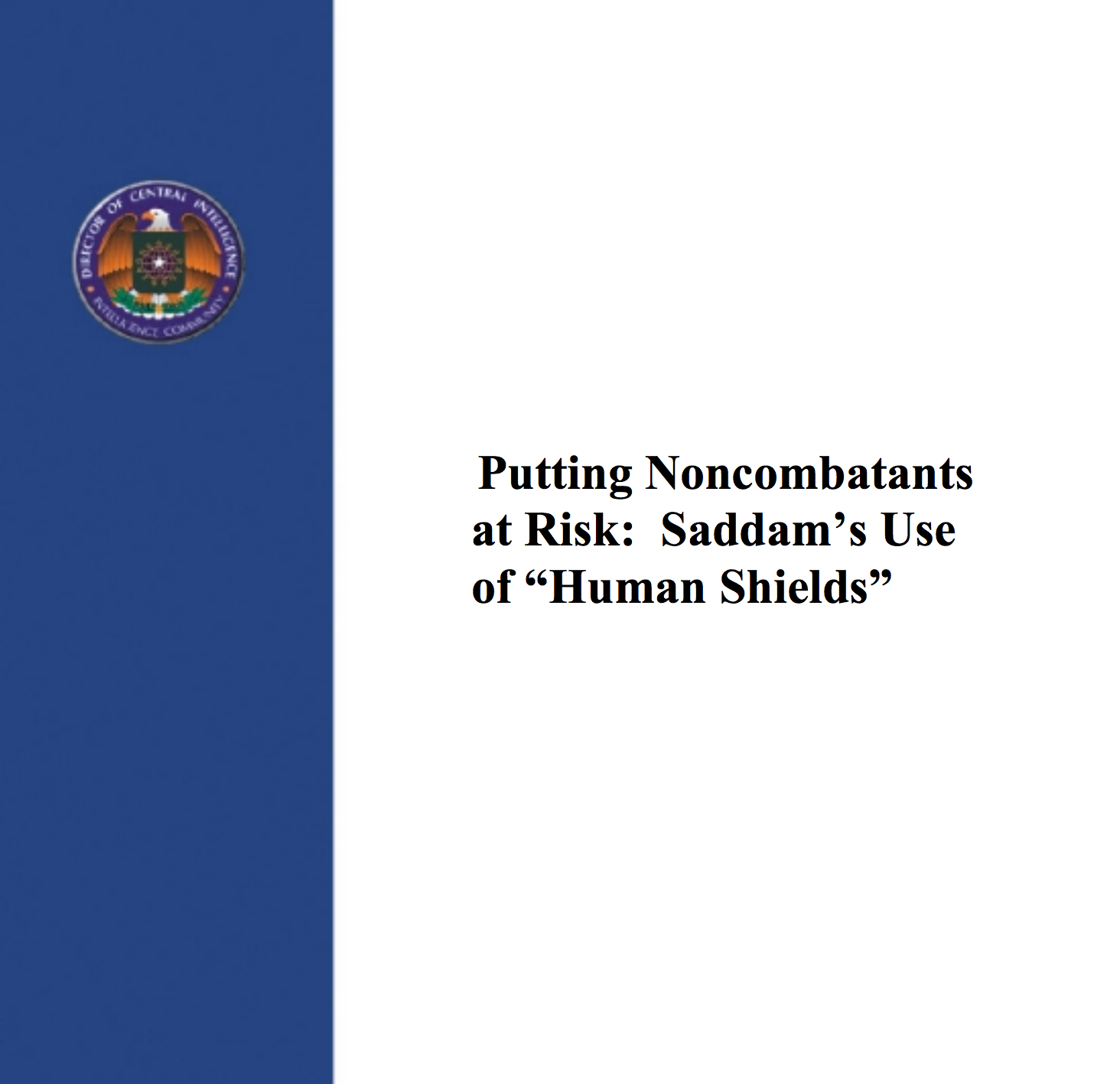 During the height of the US propaganda push for a second unjustified war, a lengthy CIA document was dedicated to Saddam’s use of human shields. In the document, the Bush administration tried to preemptively justify the mass civilian death toll they knew was certain to come by saying the Iraqi dictator plans to shield his military and blame coalition forces for civilian casualties that Saddam has caused.

The propaganda was modified so that the human shield claim could be used to justify hitting civilian targets. If an American soldier bombed or shot at a Mosque resulting in the deaths of civilians, the immediate retort from Senor was a variant of “they are using places of worship to stockpile weapons.”

Moving on to Afghanistan, where Taliban militants were accused of using civilians as human shields, according to government officials. Yet again, another narrative spun by the military with little evidence used as a cover for mass civilian casualties.

Despite the frequency of this term being applied in a post-9/11 world, it has been long practiced before the so-called War on Terror. Searching through print newspaper archives you can find the use of human shields applied to virtually every enemy involved in a military conflict with the US.

During the Vietnam war, the Viet Cong was accused of using defenseless civilians as human shields. 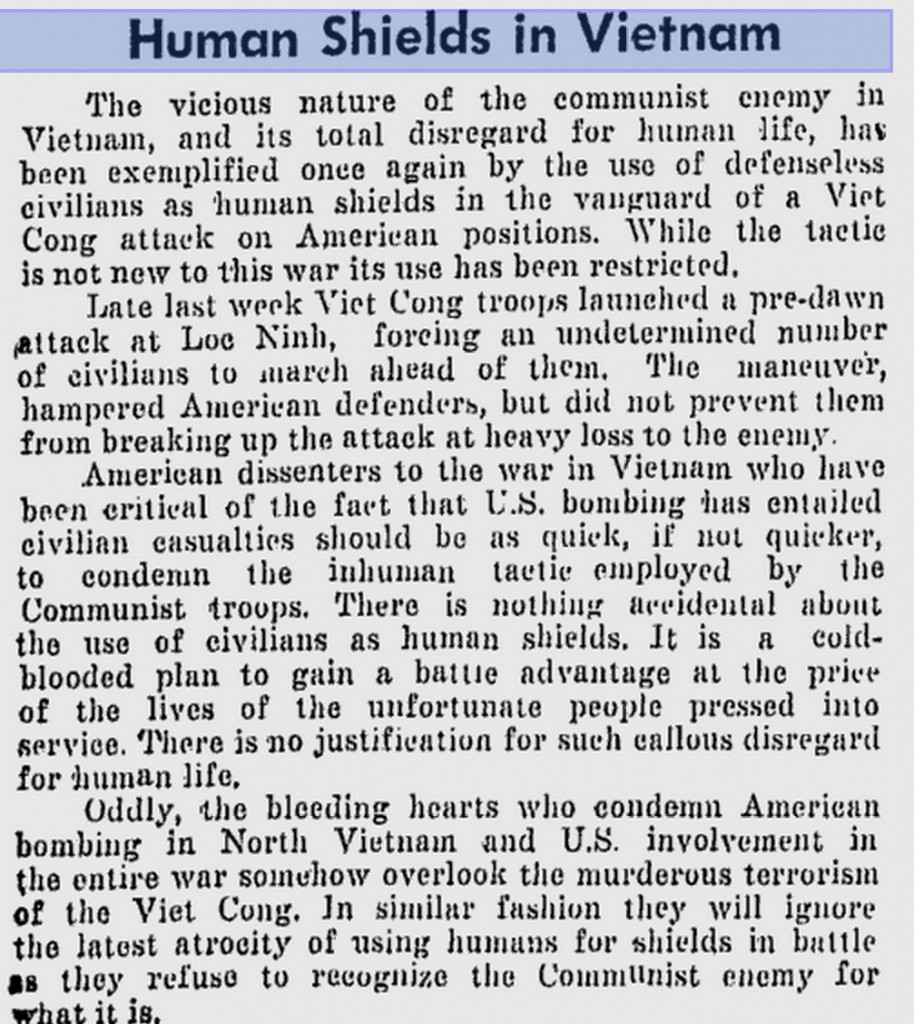 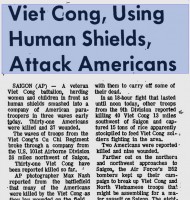 During the Korean war, the North Koreans were described similarly, but with even cruder 1950’s slang.

Even during World War II, the Nazis and Japanese army were accused of doing the same.

The further one goes back in the historical record, the more difficult it is to verify or debunk the veracity of these claims. But the propaganda has served the same purpose – to dehumanize entire populations. In almost every instance, the enemy was painted as having zero regard for human life, making it easier for nations like the US to blow up countries, desecrate culture, torture, slaughter, and hold thousands of people indefinitely without charges.

Francis Fukuyama, influential DC neoconservative and co-sponsor of PNAC’s ‘Rebuilding America’s Defenses’ displayed a rare moment of candor when he admitted that modern American foreign policy is even inspired by Israeli Hasbara:

“Many Neoconservatives have adopted the point of view, the strategic prism of many hardliners on the Israeli right, including their interpretation of Arab motives and behavior, this idea that the Arabs don’t understand any principles of legitimacy, its only force that they respect.”

Every society, culture and country has extreme aspects to it, and Muslims are no different. But taking the most severe scenario that exists and exploiting it to generalize an entire demographic is extremely disingenuous and frankly, racist. When these terms are used, it paints Muslims, Arabs or Palestinians as monsters, ignoring that we’re all human beings, bleeding the same blood, feeling the same pain and suffering the loss of our loved ones just the same.

Written by Abby and Robbie Martin