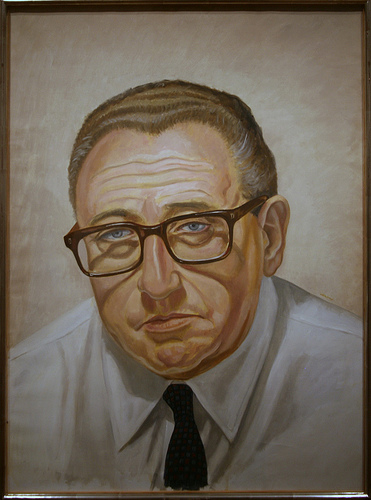 Two months ago, hundreds of thousands of Chileans somberly marked the 40th anniversary of their nation’s September 11th attack. It was on that date in 1973 that the Chilean military, armed with a generous supply of funds and weapons from the US, and assisted by the CIA and other operatives, overthrew the democratically-elected government of the moderate socialist Salvador Allende.

Sixteen years of repression, torture and death followed under the fascist Augusto Pinochet, while the flow of hefty profits to US multinationals – IT&T, Anaconda Copper and the like – resumed. Profits, along with concern that people in other nations might get ideas about independence, were the very reason for the coup and even the partial moves toward nationalization instituted by Allende could not be tolerated by the US business class.

Henry Kissinger was National Security Advisor and one of the principle architects of the coup in Chile. US-instigated coups were nothing new in 1973, especially those in Latin America. Kissinger and his boss Richard Nixon were carrying on a violent tradition that spanned the breadth of the 20th century and continues in the 21st – see, for example, Venezuela in 2002 (failed) and Honduras in 2009 (successful). Where possible, such as in Guatemala in 1954 and Brazil in 1964, coups have been the preferred method for dealing with popular insurgencies. In other instances, direct invasion by US forces such as happened on numerous occasions in Nicaragua, the Dominican Republic and many other places, has been the fallback option.

The coup in Santiago occurred as US aggression in Indochina was finally winding down after more than a decade. From 1969 through 1973, it was Kissinger again, along with Nixon, who oversaw the slaughter in Vietnam, Cambodia and Laos. It is impossible to know with precision how many were killed during those four years; all the victims were considered enemies, including the vast majority who were non-combatants, and the US has never been much interested in calculating the deaths of enemies. Estimates of Indochinese killed by the US for the war as a whole start at four million and are likely far more. It can thus be reasonably extrapolated that probably more than a million, and certainly hundreds of thousands, were killed while Kissinger and Nixon were in power.

In addition, countless thousands of Indochinese have died in the years since from the affects of the massive doses of Agent Orange and other Chemical Weapons of Mass Destruction unleashed by the US. Many of us here know soldiers who suffered from exposure to such chemicals; multiply their numbers by 1,000 or 10,000 or 50,000 – again, it’s impossible to know with accuracy – and we can begin to understand the impact on those who live in and on the land that was so thoroughly poisoned as a matter of US policy.

Studies by a variety of organizations including the United Nations also indicate that at least 25,000 people have died in Indochina since war’s end from unexploded US bombs that pocket the countryside, with an equivalent number maimed. As with Agent Orange, deaths and ruined lives from such explosions continue to this day. So 40 years on, the war quite literally goes on for the people of Indochina, and it is likely it will go on for decades more.

Near the end of his time in office, Kissinger and his new boss Gerald Ford pre-approved the Indonesian dictator Suharto’s invasion of East Timor in 1975, an illegal act of aggression again carried out with weapons made in and furnished by the US. Suharto had a long history as a bagman for US business interests; he ascended to power in a 1965 coup, also with decisive support and weapons from Washington, and undertook a year-long reign of terror in which security forces and the army killed more than a million people (Amnesty International, which rarely has much to say about the crimes of US imperialism, put the number at 1.5 million).

In addition to providing the essential on-the-ground support, Kissinger and Ford blocked efforts by the global community to stop the bloodshed when the terrible scale of Indonesian violence became known, something UN ambassador Daniel Patrick Moynihan openly bragged about. Again, the guiding principle of empire, one that Kissinger and his kind accept as naturally as breathing, is that independence cannot be allowed. That’s true even in a country as small as East Timor where investment opportunities are slight, for independence is contagious and can spread to places where far more is at stake, like resource-rich Indonesia. By the time the Indonesian occupation finally ended in 1999, 200,000 Timorese – 30 percent of the population – had been wiped out. Such is Kissinger’s legacy and it is a legacy well understood by residents of the global South no matter the denial, ignorance or obfuscation of the intelligentsia here.

If the United States is ever to become a democratic society, and if we are ever to enter the international community as a responsible party willing to wage peace instead of war, we will have to account for the crimes of those who claim to act in our names like Kissinger. Our outrage at the crimes of murderous thugs who are official enemies like Pol Pot is not enough. A cabal of American mis-leaders from Kennedy on caused for far more Indochinese deaths than the Khmer Rouge, after all, and those responsible should be judged and treated accordingly.

The urgency of the task is underscored as US aggression proliferates at an alarming rate. Millions of people around the world, most notably in an invigorated Latin America, are working to end the “might makes right” ethos the US has lived by since its inception. The 99 percent of us here who have no vested interest in empire would do well to join them.

There are recent encouraging signs along those lines, with the successful prevention of a US attack on Syria particularly noteworthy. In addition, individuals from various levels of empire have had their lives disrupted to varying degrees. David Petraeus, for example, has been hounded by demonstrators since being hired by CUNY earlier this year to teach an honors course; in 2010, Dick Cheney had to cancel a planned trip to Canada because the clamor for his arrest had grown quite loud; long after his reign ended, Pinochet was arrested by order of a Spanish magistrate for human right violations and held in England for 18 months before being released because of health problems; and earlier this year, Efrain Rios Montt, one of Washington’s past henchmen in Guatemala, was convicted of genocide, though accomplices of his still in power have since intervened on his behalf to obstruct justice.

More pressure is needed, and allies of the US engaged in war crimes like Paul Kagame should be dealt with as Pinochet was. More important perhaps for those of in the US is that we hound Rumsfeld, both Clintons, Rice, Albright and Powell, to name a few, for their crimes against humanity every time they show themselves in public just as Petraeus has been. That holds especially for our two most recent War-Criminals-in-Chief, Barack Bush and George W. Obama.