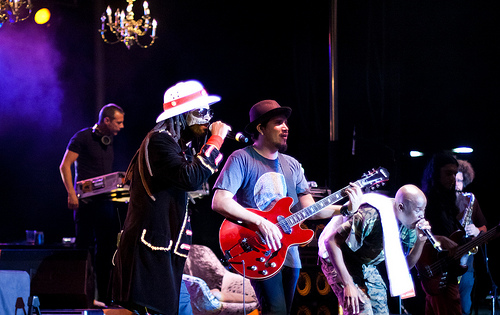 MEDIA ROOTS – Thievery Corporation, a DC-based music group, released their sixth studio album last year titled Culture of Fear and continue to receive rave reviews among followers of this genre. Its electronic beats are expertly fused with several acoustic sounds which are the hallmark of this recording artist and DJ team.

The black album cover, featuring only a remote surveillance camera, reminds listeners of the current state of diminishing control of personal privacy in modern society. Tracks titled “False Flag Dub,” “Tower Seven,” and “Culture of Fear” invoke a perspective that is not only highly uncommon in the music industry but virtually unexpressed anywhere in general society.

The influence of this group, formed in 1995, cannot be understated. They performed last month at the Fairgrounds in Washington DC for a capacity audience and are appearing next Wednesday in Kansas City before heading to Austin City Limits the following weekend.

We have taken the liberty to feature below the official video of Culture of Fear featuring Mr. Lif as well as the song’s lyrics. Check them out and let us know what you think about this group of music activists.

Seems to me like they want us to be afraid, man.

Maybe we just so used to it at this point that it’s just a part of us,

Part of our culture.

I mean what’s up man?

Can’t a brother get “yellow” man?

The groove is dead so I’m a rhyme like a lunatic.

I do this shit with an unassuming wit.

The corporation conjured up the bass and the tempo.

The flow of life, throwing strife into the mix,

The big dark condition and the world is sick.

The powers that be

A power in me

To speak a cause

Stress and strife that I see every day

And more to speak upon.

It’s up in your ear.

They’re telling us terrorists about to strike

Let me back up slowly

With critical analysis of those who control me.

It used to be we just had a screen in the crib — on the TV,

But now we carry screens when we leave, see?

A new affliction I call it “media dome.”

But on the road famine is the programming

Hold hands and let’s gaze into the beautiful glare

While we’re here so immersed in this culture of fear.

But we’re more afraid of the credit card than the terror squad.

Yet Mastercard and Visa want to buy me the greed.

They deceive, the enemy is in the fine print.

They assassinate, sell-it, with no single assailant.

Forms, I’m stealing, to give a view of blue sky.

It’s beautiful, then a couple choppers flew by.

Represent an element ahead

A sentiment that you feel on the road, for real,

The deal stars with a spark, concludes with a handshake.

Physical to alter your subliminal landscape

Relief thinking I can really trust that guy

To be honest could have, should have really punched that guy.

Thank you for the loan

See you when you come to repossess my home.

Alone at night sweating with visions of Armageddon

I never seen the threat yet I feel threatened.

Parts of our society designed to smear

Freedom: don’t succumb to this culture of fear….

Don’t succumb to this culture of fear…

Don’t succumb to this culture of fear.