MEDIA ROOTS- Recently, I remembered a little known video by physicist and 9/11 researcher David Chandler, tackling the statistics on the ongoing “War on Terror”. Here it is. I borrowed the title from a salty comment by David in his own Youtube thread.

On 9/11, according to the official death toll, 2,976 victims and 19 hijackers died. Since then, we have been engaged in the “Global War on Terror”, colloquially known as the GWOT. This war, as Dick Cheney, the ‘Sith Lord’ without a beating heart warned us, won’t end in our lifetime, or at the very least, may take decades. Initially, in the aftermath of 9/11, there was a worldwide outpouring of support and solidarity for the U.S., as French and Italian newspapers proclaimed: “We are all Americans” and Vladimir Putin said, in a televized address: “Russia knows directly what terrorism means, and because of this we, more than anyone, understand the feelings of the American people. In the name of Russia, I want to say to the American people — we are with you.”

A week later, the anthrax attacks followed, further terrorizing Americans who had already been traumatized. At times it felt as if World War Three was imminent. NATO, in response to the 9/11 attacks, invoked article 5 for the first time in its 52-year-long history, in early October 2001. But who to put in the crosshairs of NATO’s vengeful military bravado? Then Secretary of Defense Donald Rumsfeld preferred Iraq, because he didn’t really think Afghanistan had any good targets to bomb. Ultimately, he’d get them both, leading us into the seemingly insurmountable mess the NATO partners are in today.

It didn’t end there though. Several incidents occurred that further motivated Europe to close ranks and line up behind U.S. anti-terrorism efforts. The train bombings in Madrid, in March 2004. The assassination of Dutch author, film maker and firebrand Theo van Gogh in Amsterdam, in November 2004. The London bombings of July 7, 2005, followed by another, failed attempt at a terrorist attack two weeks later. One year later, in July 2006, two suitcase bombs were discovered in trains in Germany. In the worldwide crossfire, as the Iraqi, Afghani and Palestinian death toll mounted, and the outrage over the Bush administration’s shameless Iraqi WMD lies climaxed, jihadis couldn’t have found a more fertile recruitment pool. Terrorism and a peculiar mix of counterterrorism and imperialism were now entangled in a vicious circle of reciprocity, and it was, and is, hard to determine which is a response to which. 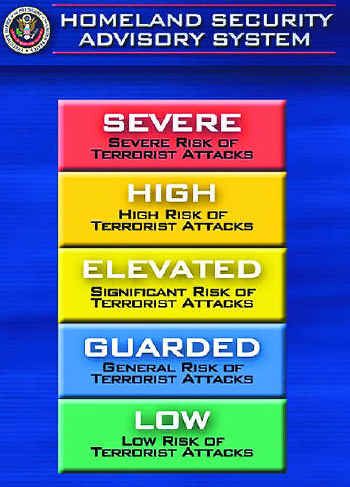 Terrorist attacks in the United States and Europe have altered our societies. They have changed the way we travel, the way we conduct criminal trials, the way we think about our civil liberties. The Wolfowitz Doctrine’s emphasis on unilateralism evolved into the Bush Doctrine: waging preemptive war against nations that might pose a threat to our security, timid protestations from the UN notwithstanding.

We are constantly encouraged to be on the lookout for danger, report suspicious activities and watch for left luggage in airport terminals or bus stations. And if we don’t do it, creepy, fully automated camera surveillance systems will do it for us. In that sense, the Bush Doctrine has wormed its way into our everyday lives, and we frenetically look inward to foil plots before they happen, to detect radicalization in our friends and enemies, colleagues and neighbors. Radicalism, we are told, is a precursor of terrorist tendencies. Therefore, all radicals are potential terrorists.

Thought crime is no longer a taboo; Orwell rolls in his grave. It wasn’t the action, but the reaction in the form of totalitarian legislation that brought us here. We are told terrorists attack us because they hate our freedoms. The past decade tells a different story: terrorists may terrorize, but no entity hates our freedoms more than our own government, which is always in an excellent position to act upon its hatred. We are nurturing a culture of vigilantes and snitches. Politicians campaign on fear, and have pissing matches with their challengers about who is most ‘patriotic’ and best prepared to ‘protect’ the country.

In our ‘protection-addiction’, we unleash the full spectrum of counterterrorist measures not only on terrorists, but on ourselves. One example of security obsessed lunacy is the placement of children and even babies on so-called “no-fly” or other related watch lists. Bureaucracy or not, mistaken or not, it’s absurd. And if that wasn’t quite absurd enough for you, how about ‘terror babies’?

In the cacophony of news reports about thwarted terrorist attacks, and the spectacle of bellicose propaganda, we aren’t allowed a breath, we aren’t allowed a thought, not a whimper of protest against this juggernaut of self-defense overkill and the constant, compulsive, neurotic self-inspection. We are behaving like hypochondriacs. Increasingly, the otherwise distinctive line between terrorism and dissent, terrorism and crime, terrorism and immigration fades in the public’s mind.

The advent of the internet enabled citizens worldwide to interact and exchange news reports, dissenting opinion and historical context, bypassing the mainstream media filter. A filter that is said to separate the wheat from the chaff, but instead drowns out undesirable critical thought that goes beyond established ‘acceptable’ boundaries. The accepted, mainstream perceptions and historical chronology about the terrorist attacks that shaped our collective foreign policies are rarely accurate. This applies to the majority of citizens of NATO countries. I have yet to ask someone: “Who is currently thought to be responsible for the 2001 anthrax attacks?” and get the correct answer or anything other than a blank, mystified stare. I suggest you try it on the first gullible ignoramus who calls you a conspiracy nut. The legacy of the anthrax attacks: every time a malcontent sends an envelope of talcum powder to a government agency he has a dispute with, chaos ensues.

“We’re an empire now, and when we act, we create our own reality. And while you’re studying that reality — judiciously, as you will — we’ll act again, creating other new realities, which you can study too, and that’s how things will sort out. We’re history’s actors . . . and you, all of you, will be left to just study what we do.”

The ‘new realities’ of the GWOT have led to a new form of perpetual mass hysteria. ‘New realities’ involve, for example, color-coded threat level conditioning. We’re stimulated to be afraid. Incursions on democracy, the separation of powers and civil liberties which were once unthinkable become commonplace, as future generations grow up never questioning the big brother apparatus supposedly there for their own protection. Like wild animals domesticated, it’s a matter of time, patience and training. Anachronistic notions of civil and human rights slowly become extinct. In the GWOT, double standards with respect to human rights are considered pragmatic, as if the necessity of unethical practices (torture, rendition, extra-judicial assassinations) are self-evident.

We’re blatant hypocrites, let’s not pussyfoot around it. By today’s dystopian norms, the enlightened radicals who built the foundations of Western constitutional democracy would be considered terrorists, which is fascinating, in a morbid, cynical way. But what’s even more fascinating is the persistent and growing desire to eliminate all risk from our daily lives. It’s from this desire that insurance companies reap the profits. Fear of terrorism essentially boils down to fear of death. Fear is a primal biological mechanism to help animals protect themselves from harm. Too much fear leads to paralysis. Too little fear causes recklessness. So… how about a little reflection. What would it take for people to assess their own security rationally? Who is really paranoid here, civil and human rights activists or the die hard proponents of the GWOT? Time to have a hard, confronting look at some statistics.

Casualties of the GWOT:

It should be noted that the lower casualty estimates of the invasion and occupation of Iraq have been heavily criticized by, among many, Justin Raimondo of antiwar.com and Project Censored. Meanwhile, the GWOT is expanding to Yemen, but its manifestations remain largely under the mainstream media radar. Key question, of course, is how many civilian American casualties are due to terrorist attacks. In 2009, 25. That’s twenty-five, in case you missed it. (The US government definition of terrorism excludes attacks on U.S. military personnel.) Worldwide, the number was considerably higher, but includes wounded, as the National Counterterrorism Center (NCTC) notes:

“Almost 58,000 individuals worldwide were either killed or injured by terrorist attacks in 2009. Based upon a combination of reporting and demographic analysis of the countries involved, well over 50 percent of the victims were Muslims, and most were victims of Sunni extremist attacks.”

Mind you: the government has its own, curious definition of terrorism:

“In deriving its figures for incidents of terrorism, NCTC in 2005 adopted the definition of “terrorism” that appears in the 22 USC § 2656f(d)(2), i.e., “premeditated, politically motivated violence perpetrated against noncombatant targets by subnational groups or clandestine agents.”

In other words, the state assures you that the state, by definition, is incapable of terrorist acts. Wisely, the report concludes:

“The Worldwide Incidents Tracking System (WITS) data provided in the National Counterterrorism Center’s Report on Terrorism is the triumph of empirical analysis over primal fear of terrorism and impulses to react rashly.”

In that context, consider the following table: Annual Causes of Death in the United States

It’s hard to miss the hilarious ‘0’ in the Marijuana row, however, did you also notice the penultimate row? According to a study published in “Annals of Internal Medicine”, 7600 Americans die and another 76 000 are hospitalized each year because of side effects of “non-steroidal anti-inflammatory drugs” such as aspirin. That’s approximately two-and-a-half 9/11’s per year. How about a war on aspirin?

One thought on “MR Original – The War On Paranoid Rhetoric”