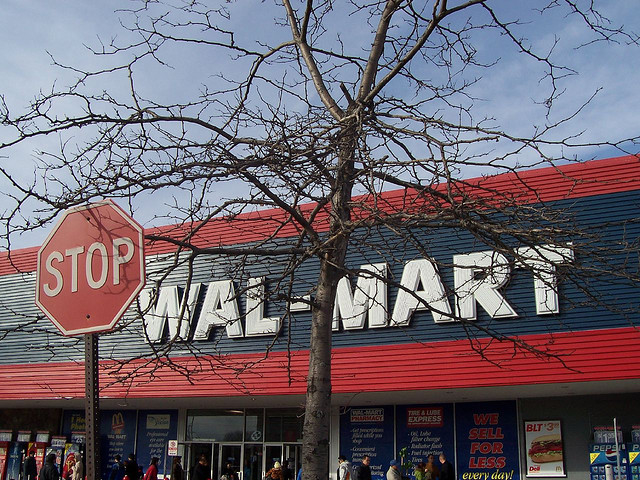 As the saying goes, there’s no such thing as a free lunch. Nowhere does that ring more loudly true than in the aisles of every Walmart store. Always low prices, yes – but at what cost?

There are, unfortunately, two inconvenient truths about the dollars you’ve supposedly saving from having elected the world’s largest retailer over Joe’s little store just down the street. First off, what you don’t pay, someone else is paying for. And secondly, the actual price you pay is much higher than what your receipt tells you.

I’m aware that the slogan I mentioned earlier is outdated. The irony was not lost when, in 2007, the company swapped it for the rather idealistically sounding “Save Money, Live Better” – a far cry from the everyday reality facing the average Walmart employee in the United States. Making an average hourly wage of $8.81 an hour, or about $18,300 a year working full-time, is hardly the way to live better. It’s only slightly over a third of a living wage for an adult with one child.

That’s why Walmart isn’t quite as cheap as you’d think – because much of what you’re not paying at the cashier ends up getting paid for through your taxes. It’s estimated that every Walmart store in America costs citizens $1.7 million in welfare benefits such as food stamps. Taxpayers are effectively subsidizing the retailer for its failure to pay employees a living wage.

Abby Martin outlines Walmart’s horrible treatment of employees and destruction of the planet on Breaking the Set:

Why Walmart is an Economic Death Star

Amazingly, Walmart could afford to give all of its employees a 50 percent raise without even touching its bottom line – but it chooses not to. And why does it choose to perpetrate the countless other assaults on its outsourced workforce, female employees and the environment? The answer’s simple: profit maximization.

We’ve all heard of corporate social responsibility. Be it sincere or mere corporate whitewashing, the “triple bottom line” of economic, social and environmental sustainability surely fares better than the single-minded focus on profit that prevails under the current global economic order.

The existing objective, profit maximization, is exactly what it sounds like: putting profits above all else, be it workers’ right to “live better”, the planet’s capacity to sustain human activity, worker and consumer health and safety, economic stability, or human lives. This reckless pursuit of profit is why taxpayers are propping up large corporations that make obscene profits in the meantime.

It’s why 1100 Bangladeshi workers, many of them making garments sold at Walmart, lost their lives when the Rana Plaza factory collapsed due to blatant disregard for building safety on the part of the companies it supplied (Walmart still refuses to sign an international agreement that would ensure worker safety in its sweatshops).

It’s why General Electric, Toshiba and Hitachi did nothing about the flaws in their nuclear reactors at Fukushima that caused them to melt down in 2011, despite knowing for decades that they were unsafe.

It’s why there is still no vaccine for ebola despite over 2000 deaths at the time of writing – because there’s no money to be made out of it. Or why corporate tax evasion through loopholes and tax havens costs the United States some $300 billion every year.

It’s why governments, on behalf of their grossly bloated financial sectors, are negotiating a secretive international financial treaty that further deregulates global finance known as the Trade in Services Agreement (TISA).

And so on. What these failures of the capitalist system, or what neoliberal economists term “market failure”, share is a common root in the unwillingness on the part of businesses to fully account for their costs. Taxpayers pay the price for Walmart’s refusal to adequately pay its own workers. The manufacturers of the Fukushima nuclear plants, unwilling to dish out the money to fix their inherent design flaws, unleashed a public health disaster that threatens to get worse. Global finance triggered the Great Recession through their own risky but rewarding behaviour and want to do it all over again.

The very nature of business needs to change if humanity is to avoid yet more Rana Plazas, Fukushimas and Great Recessions, and if it is to ever overcome ebola, tax evasion and corporate welfare. We need to move away from the predatory capitalist “I want it all” ethos and towards new business models that account for all costs rather than leaving them for others to pay. This is not financially impossible, and there’s no reason why such a model can’t be financially self-sustaining. But it’s only when business owners and executives start to acknowledge their responsibility to really help the rest of society to “live better” rather than taking more and more for themselves will that model be possible.

Abby Martin calls out the corporations that refuse to pay their workers a living wage, despite posting record profits and generously compensating their CEOs.