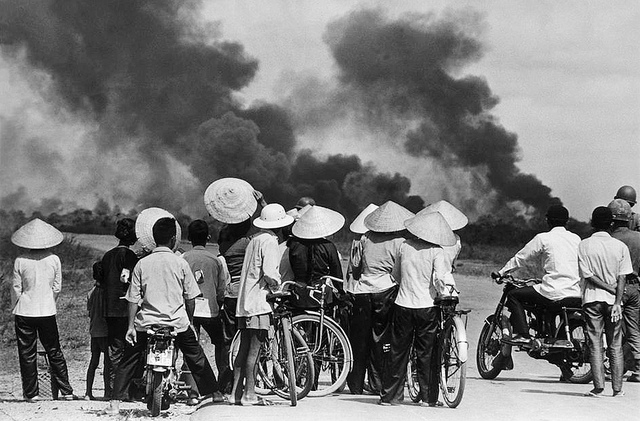 Articles aplenty have appeared to mark the recent 50th anniversary of the first battle between US soldiers and the army of what was known in this country as North Vietnam. Come April, we can expect far more commentary on the 40th anniversary of the end of the fighting in what is still referred to as the “Fall of Saigon.”

This is especially significant considering the Pentagon recently posted a lengthy history of the Vietnam War (the Vietnamese, whose struggle for independence was waged against the Chinese, the French and the Japanese, in addition to the US, refer to this same period as the American War). Many sifting through its website might be confused as to why the stories differ dramatically from what one would hear from a war veteran or activist.

Pinpointing where US aggression in Vietnam began depends on how one determines when war starts. It’s silly to claim it began in February of 1965, as tens of thousands of Vietnamese were already dead at US hands by that point. Better to trace the origins to 1945, when the United States refused to recognize the new government established by Vietnamese independence forces.

See, Japan invaded Vietnam years earlier and French colonialists ceded the country to the Japanese. When French colonialists finished sipping cognac in Paris and decided to re-invade Vietnam, the US backed them to the hilt with weapons, financing and diplomatic cover. Unsurprisingly, the Vietnamese people resisted – just as they had resisted other occupiers for centuries.

As the French failed its attempt at re-conquest, the US bore more of the war’s burden until, in 1954, the Vietnamese were again on a path to independence. Yet the US undermined the elections Washington knew Ho Chi Minh would win in a landslide. As in dozens of cases over the past 100 years, the US opposed democracy in favor of aggression. Elections are praised when the right people win; machine guns raised if the wrong people win.

The US flew Ngo Dinh Diem in from New Jersey and installed him as dictator. Eventually, Kennedy had him whacked a mere three weeks before he himself was assassinated. This was not, however, before Kennedy began the saturation bombing of South Vietnam with napalm, while also calling for ground troops and organized strategic hamlets.

Lyndon Johnson’s fabrication of the Gulf of Tonkin incident in August 1964 was another turning point. Within six months, the Peace Candidate who had startled the world with a campaign ad attacking Barry Goldwater as a warmonger extended the invasion and bombing campaign in Vietnam. So it remained until the Super Rich grew antsy about the financial costs of the war, the US’s growing international embarrassment, unprecedented domestic upheaval, an army that increasingly wouldn’t fight, and the stark realization that there was no way the Vietnamese could lose militarily. I recall reading years ago something a Vietnamese elder who had probably seen as much death and destruction as anyone who ever lived said (I’m paraphrasing): We can settle this now or we can settle it a thousand years from now. It’s up to the Americans.

It’s impossible to calculate the Vietnamese death toll. Whatever Vietnam has said has been dismissed by the powerful, as anti-American propaganda and US elites have never bothered to summarize. Their attitude was captured perfectly by a general speaking of a more recent conflagration: “We don’t do body counts.” Not, anyway, when the dead bodies are victims of US violence.

Three million Vietnamese deaths is a commonly cited figure but undoubtedly far too low. Also completely ignored is the Vietnamese experience of Agent Orange and Post Traumatic Stress Disorder, for example. Take the terrible suffering of US soldiers and multiply their numbers ten thousand fold or more and we get a sense of the damage to the Vietnamese. Additionally, Vietnam and the rest of Indochina (it’s often conveniently forgotten that the US also waged war against Laos and Cambodia) are full of unexploded ordinances that regularly cause death and injuries, to this day. There’s also the starvation deaths of hundreds of thousands throughout Indochina immediately after the war. A countryside ravaged by bombing, combined with the curtailment of airlifts, doomed those hundreds of thousands once the US imposed an ironclad embargo. That’s an unpleasant truth, though; so much easier to blame everything on the Vietnamese Communists and the despotic Khmer Rouge.

Discussions of Vietnam are hardly academic exercises; the US is on a global rampage and falsifying history has paved the way to the US-caused deaths of three million Iraqis since the first invasion in 1991, to cite just one of many recent examples. We remain in the grips of people who worship wealth and are in love with war, so any truth and reckoning about Vietnam and the destruction imperialism wreaks on the world will have to come from us.

3 thoughts on “Rewriting the Vietnam War”