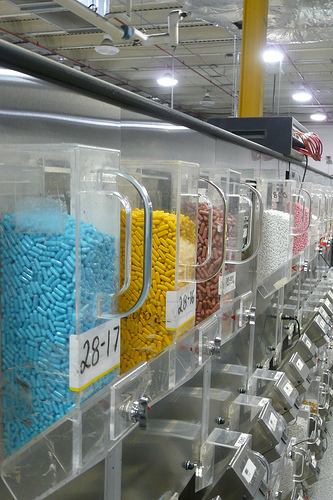 MEDIA ROOTS – Pharmaceutical companies spend an astronomical amount of money on lobbying and advertising.  Sometimes a marketing campaign is so expensive that even if it’s discovered that a drug is ineffective once it hits the market, the money spent needs to be made back; instead of recalling the drug, they continue to push it. Risperdal, a drug designed to treat PTSD, is one such example; although proven equally as effective as placebo, it has cost the Department of Veterans Affairs $717 million dollars over the course of 9 years.

COUNTERPUNCH – Pharma is losing so much money from rising co-pays and prescription abandonment, it has launched cagey, public service announcement-sounding campaigns about “patients not taking the drugs they need,” as if it is a health and not revenue issue. Pharma has even instituted arrangements with some pharmacies to send visiting nurses to patients’ homes to ensure “compliance,” Big Brother overtones notwithstanding.

Prescription abandonment is an especially thorny issue for Pharma when the drugs are taken on faith, to reduce patients’ “risks” and patients do not necessarily feel them working. It is also a thorny issue when studies suggest the drugs being abandoned may not be necessary to begin with or working.

One such expensive placebo is the drug known by the brand name Risperdal. The Department of Veterans Affairs spent $717 million on the drug to treat posttraumatic stress disorder in Afghanistan and Iraq troops with PTSD over nine years, only to discover it worked no better than a sugar pill! Veterans Affairs doctors wrote more than 5 million prescriptions from 2000 through June 2010 for naught, says a 2011 paper in the Journal of the American Medical Association (JAMA). Last month, Johnson & Johnson also agreed to pay $1.2 billion in fines for minimizing or concealing Risperdal’s dangers. Many say unless a drug company’s chief officers go to prison or the company is banned from sales to Medicare and other government programs, penalties are a joke.

Read more about When Big Pharma Writes The Laws.

One thought on “When The Pharmaceutical Industry Writes Our Laws”