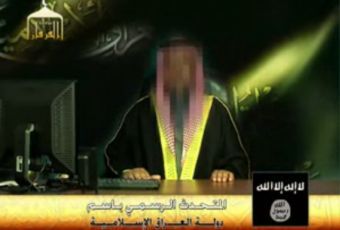 REUTERS– A senior operative for al Qaeda in Iraq who was caught this month has told his U.S. military interrogators a prominent al Qaeda-led group is just a front and its leader fictitious, a military spokesman said on Wednesday. Brigadier-General Kevin Bergner told a news conference that Abu Omar al-Baghdadi, leader of the self-styled Islamic State of Iraq, which was purportedly set up last year, did not exist.

“The Islamic State of Iraq was established to try to put an Iraqi face on what is a foreign-driven network”, Bergner said.

“The name Baghdadi means the person hails from the Iraqi capital. Bergner said the information came from an operative called Khalid al-Mashadani who was caught on July 4 and who he said was an intermediary to Osama bin Laden.” He said Mashadani was believed to be the most senior Iraqi in the Sunni Islamist al Qaeda in Iraq network.

“U.S. military officials in recent weeks have been pressed to explain the link between al Qaeda in Iraq and bin Laden’s global network given the military’s heightened focus on al Qaeda in Iraq as the biggest threat to the country.” The military blames al Qaeda in Iraq for most of the major bombings in Iraq, saying the group is trying to spark all-out civil war between majority Shi’tes and minority Sunni Arabs.

Bergner said Mashadani served as an intermediary between the al Qaeda in Iraq leader, Egyptian Abu Ayyab al-Masri and bin Laden and also the Egyptian cleric Ayman al-Zawahri, who is the global network’s No. 2 commander. The Islamic State of Iraq was set up in October, comprising a group of Sunni militant affiliates and tribal leaders led by Baghdadi. In April, it named a 10-man “cabinet”. The Islamic State of Iraq has claimed many high-profile acts of violence.

But Bergner said Mashadani and Masri had co-founded a “virtual organization in cyberspace called the Islamic State of Iraq in 2006 as a new Iraqi pseudonym for AQI.”

“To further this myth, Masri created a fictional head of the Islamic State of Iraq known as Abu Omar al-Baghdadi,” he said.

“To make al-Baghdadi appear credible, al-Masri swore allegiance to al-Baghdadi and pledged to obey him, which is essentially pledging allegiance to himself since he knew Baghdadi was fictitious and a creation of his own,” he said. “The rank and file Iraqis in AQI believe they are following the Iraqi al-Baghdadi. But all the while they have been following the orders of the Egyptian Abu Ayyab al-Masri.”

Voice recordings purporting to be from Baghdadi have appeared on the Internet, although Bergner said he had been played by an actor. He did not refer to any video clips. Bergner said Mashadani was al Qaeda’s “media emir” for Iraq. He said the operative was “providing significant insights into the nature and circumstances of al Qaeda in Iraq”. The U.S. military has always said al Qaeda in Iraq was run by foreigners.