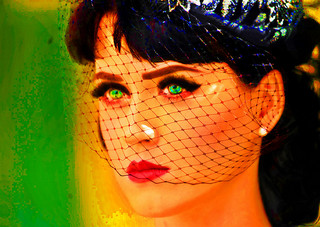 In Katy Perry’s dramatic new video for her corporate record label—the same label Radiohead is on, by the way—Capitol under EMI under Citigroup—her character has an epiphany when she sees a bumper sticker on a bulletin board:

“All women are created equal
But then some become Marines”

I suppose any artist daring enough to flirt with military imagery must either be an incredibly courageous artistic genius or a misguided tool.  If numbers say anything, Katy Perry’s “Part of Me” video already has over 39 million views.  But, clearly, that military joke isn’t funny anymore.  And Naomi Wolf, who has done her fair share of dirt on behalf of women’s rights and human rights, wasn’t laughing either.  Even boycotts are being called against Katy Perry.

“When you shine in the public eye, my dear
Please remember these nights…”

READER SUPPORTED — Who knew that an opinion about pop music video could get Fox News so worked up? Recently, I wrote that I was appalled by Katy Perry’s new video for the No 1 hit song, “Part of Me”. In it, the narrative has the singer discover a boyfriend’s infidelity; she responds to this by cutting her hair and – heading for basic training to become a Marine.

The creepy parts of the video, in my mind, are many: girl power is represented as what Perry accomplishes in the rigors of basic training. Feminine impulses toward romantic revenge are depicted as rightly channeled into getting armed and being shipped to some mystery Afghanistan-like set overseas, locked and loaded. Trade in your bad boyfriend for a hot AK-47!

The whole videography of the scenes at Camp Pendleton – in which Perry crawls through an imaginary minefield, trains underwater, learns she can do the impossible, etc – is straight out of Leni Riefenstahl: the same angled, heroizing upward shots, the same fetishization of physical power, of gleaming armaments, and of the rigor and mechanism of human beings cohering into living militarized units.

There is something else about the video: it feels … like an ad; specifically, a focus-grouped, consumer-tested ad to attract more women to join the Marines. Real artistic productions, whether bad or good, are messier, quirkier, more subjective. I am familiar with the way political ads get researched and filmed (it was part of what I advised on in my time as a political consultant), and this looks like a political ad put together by DC PR insiders – like, say, the Pentagon communications team – after expensive market research has been done. In political advertising, every single image and message is focus group tested. I would bet that someone did some research on the hypothetical of a marriage or relationship breakup as a catalyst for women’s military enlistment, given an economy in which the military offers low-income women some of the few options for advancement in a context in which a breadwinner may have decamped.

So I wrote that I felt that this was a piece of “war propaganda” and that, if Perry had received money or message guidance directly from the military to make the video, she should disclose that information. It might be inferred from the fact that she filmed at the USMC’s California base, Camp Pendleton, that this would have contributed at least several tens of thousand of dollars in support – in the form of free sets, use of equipment, personnel time and, possibly, food and housing; it takes a lot of people a fair amount of time to make such a video. Now, to be fair, while journalists are expected to disclose any such conflicts, I have absolutely no evidence of any such transaction, and artists are subject to no such expectation. (Albeit, this would be a subsidy that you, the taxpayer, have underwritten.)

Read more about Katy Perry and the Military-Pop-Cultural Complex.

Katy Perry — Part of Me

Tool — Part of Me

One thought on “Naomi Wolf vs. Katy Perry and Sexy Military Propaganda”