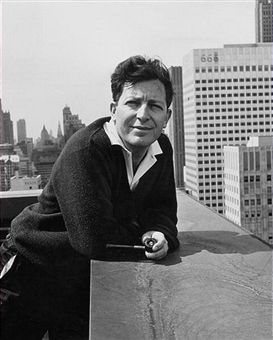 MEDIA ROOTS — If you’re like me, you don’t always have the cash or time to catch a flick the first time round. “Paul Goodman Changed My Life,” directed by newcomer Jonathan Lee, is a film of heart and soul whose protagonist has been associated with the American New Left. It debuted last October and is now available online.

Lee’s film focused on Goodman’s anarchist tendencies before and after discovering Bakunin and Kropotkin, his writing, and his Oscar Wildean personal drives and desires of being something of a family man and a free-spirited bisexual. Ultimately, although I appreciated the human interest story aspects, the weakness of this documentary seemed to be how it fell into the common trap of alienating the thinker from the thinker’s environment, socioeconomic class, and, thus, from the power structures of the thinker’s day and how the ideals being considered succeeded and/or failed in affecting those power structures—particularly the two-party system, which undergirds daily socioeconomic realities addressed by disparate dissenters.

As Gore Vidal has long held since at least the ’50s, in the USA we have one party, the party of property, of corporate and banker elite, of the 1%—one party with two wings, both right-wing, one Republican, one Democrat.

Gore Vidal, 1977:  “There is only one party in the United States, the Property Party … and it has two right wings: Republican and Democrat. Republicans are a bit stupider, more rigid, more doctrinaire in their laissez-faire capitalism than the Democrats, who are cuter, prettier, a bit more corrupt — until recently … and more willing than the Republicans to make small adjustments when the poor, the black, the anti-imperialists get out of hand. But, essentially, there is no difference between the two parties.”

“We can’t deny that there’s been every kind of effort to create an insane consensus,” said Paul Goodman, “And whenever you students try to do anything about it, in order to save my kid from being fried, whether what you’re doing is right or wrong, it’s something!”

Although there were fascinating moments when Goodman faced militants on the Left and Right, they weren’t fleshed out. Instead, the film zoomed in on the individual, on the corporeal, almost divorced from objective political reality in its preoccupation with the culture war and the subjective. The film seemed to avoid the more difficult questions and lessons we may draw from the 1960s New Left for today’s sociopolitical landscape, such as parallels with the Occupy Movement and 9/11 Truth.

From the intro to Growing Up Absurd:

“We see groups of boys and young men disaffected from the dominant society. The young men are angry, and beat. The boys are juvenile delinquents. But these groups are not small and they will grow larger. Certainly, they are suffering. Demonstrably, they are not getting enough out of our wealth and civilisation. It is hard to grow up in a society in which one’s important problems are treated as non-existent. It is impossible to belong to it. It is hard to fight to change it. In this book I shall ask, is the harmonious organisation to which the young are inadequately socialised perhaps against human nature or not worthy of human nature? And therefore there is difficulty in growing up? If this is so, the disaffection of the youth is profound and it will not be finally remedial by better techniques of socialising.”

They say the personal is the political. But we may have countless dreamers on the margins writing beautiful prose and compelling possibilities, yet devoid of political clout, as neocons and neoliberals strip us of our rights bit by bit, even the right or capacity to dream or imagine. To me, the most compelling expositions are those of actions which, not only challenge the imagination of the individual, but directly challenge relevant centres of power. Thus, the opening clips, such as showing Goodman lecturing power players of the industrial-military complex or freely writing ideas considered seditious by the state, were the most salient.

“You are the military industrial of the United States, the most dangerous body of men at present in the world, for you not only implement our disastrous policies, but are an overwhelming lobby for them. And you expand and rigidify the wrong use of brains and resources and labour, so the change becomes difficult.”

“These remarks have certainly been harsh and moralistic. And none of us are saints and ordinarily I would be ashamed to use such a tone.  But you are the manufacturers of napalm, fragmentation bombs, the planes that destroy rice. Your weapons have killed hundreds of thousands in Vietnam. And you will kill other hundreds of thousands in other Vietnams. I’m sure that most of you concede that much of what you do is ugly and harmful at home and abroad. But you would say it is necessary for the American way of life, at home and abroad and, therefore, you cannot do otherwise. Since we believe, however, that that way of life is, itself, unnecessary, ugly, and un-American, I and those people outside, we cannot condone your present operations. They should be wiped off the slate.”

However, my central complaint with this documentary film is the seeming refusal to contextualise the narrative within the political superstructures dominating the political landscape, the refusal to analyse the role of political parties, given their centrality in all of this historical contextualisation—or tacitly giving the false progressivism of the Democrat Party a free pass. Malcolm X never did that, which is probably why he has remained one of the most compelling and enduring of the people’s heroes:

“Anytime you throw your weight behind a political party that controls two-thirds of the government, and that party can’t keep the promise that it made to you during election time, and you’re dumb enough to walk around continuing to identify yourself with that party, you’re not only a chump, but you’re a traitor to your race.”

In the film, Paul Goodman describes the need to move from “formal” or nominal democracy, to substantive democracy in practice, participatory democracy. Yet, the filmmakers seem disinterested in the role of democracy, of voting and the political parties which follow from the voting process. So, audiences lose another opportunity to learn from the mistakes of the past, such as the mistake of supporting the corrupt Democrat Party or the mistake of not working toward a non-dualistic/multiparty system of free and fair democratic elections. Instead, the life of Paul Goodman is alienated from the USA’s state of democracy as engendered by the dualistic two-party system, or dictatorship (depending on your sensibilities).

Under this lense, we may pine for the ideals yearned by Goodman, but we are not asked to think about them within the context of the USA’s rigged political system monopolised by two corrupt and predominant political parties—the Democrats and the Republicans. Instead, the focus is on the supplicant aspects of dissent, on protests and so forth. Political reality is avoided like the plague, perhaps to protect the entertainment value of the biopic, but despite the distortions produced. Don’t get me wrong; protests are crucial, but so is the need for protesters to understand and articulate the corruption of the Democrat and Republican parties. And crucial, too, is the need to reject the Democrat Party, to break the dualistic trap of the two-party system.

Greenwich Village Peace Center Draft & Military Counseling is one example featured in the film. Like single-issue groups of today, lacking analysis of contemporary political parties, groups seem willing to advise the public on how to avoid the draft, but not on how to avoid corrupt political parties, like the Democrat and Republican parties, which enabled the draft in the first place.

Also featured in Lee’s film are Goodman’s extramarital affairs and his wife’s pain as a result; his decade as a Gestalt psychoanalyst/psychologist; and his pacifist outspokenness; and his pamphlet Drawing the Line against the military draft. Lee also featured Goodman’s differences with radical “militants,” such as SDS, which he said “makes no sense.” Being able to appreciate aspects of the SDS and of Paul Goodman’s work, it’s great to hear and parse opposing points of view.  Nothing is ever good enough. Some are too radical, we say. Others are not radical enough. But the beauty of this narrative of Paul Goodman’s life is the depiction of his Socratic spirit, his ability to publicly dialogue, to debate, and to interact intergenerationally. Also notable was the discussion about those liberals or leftists, which later became conservatives or quasi-fascists, as documented in a photograph taken of Paul Goodman and others at a civil disobedience conference, including a very young Donald Rumsfeld, of all people (provided Rumsfeld wasn’t there as a spy to begin with).

These are my initial thoughts after viewing Lee’s film. Perhaps readers may help articulate a clearer analysis of what alienates us from one another. But in the meantime I recommend this film as worthy of your time, especially, for new generations unaware of Paul Goodman’s contributions to ‘60s progressive, or Leftist, thought and, therefore, to modern progressive thought. May Goodman encourage you to, as one KPFA radio scoundrel in Berkeley likes to say, “Pick up a good book and read it.”