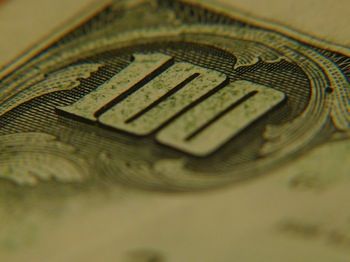 MEDIA ROOTS— Recently, economic journalist Doug Henwood was interviewed on Pacifica Radio’s “Against the Grain” to dispel various myths he and his interviewer tied to the Occupy Wall Street Movement.  One of which was about the Federal Reserve being the source of all evil.

The Federal Reserve System is the private U.S. central bank which controls our monetary policy.  And although Federal Reserve Banks are “privately owned and locally controlled corporations,” run by ruling-class elitists, we’d be worse without it, claimed Henwood.

The interviewer associated OWS concerns over the Fed with conspiracist quackery, but avoided all of the real perils of the Fed in its current structure.  Henwood’s main arguments in favour of the Fed included assuring, contrary to popular belief; it wasn’t nefariously hatched up at some secret meeting on Jekyll Island, but that it was instead “a project of many decades undertaken by the ruling-class.”  Gee, that makes me feel much better…

The scale of our modern economy, per Henwood, necessitates a central bank capable of injecting liquidity into the system swiftly in times of crisis, something the gold standard could not do.  Henwood also cited Bernanke regarding the virtues of stimulus, despite the fact that stimulus is rigged for the 1% to horde capital whilst the 99% pray for crumbs and sink deeper into debt.

The biggest problem is that the Federal Reserve system works above the law, which is why Bank of America has gotten away with dumping $75 Trillion of derivatives on U.S. taxpayers with Federal approval.  With the Fed having to answer to no one, why wouldn’t its ruling-class drivers horde profits whilst shifting liabilities onto taxpayers?  It’s unlikely to be due to the benevolence of their hearts.

SEEKING ALPHA— Bloomberg reports that Bank of America (BAC) has shifted about $22 trillion worth of derivative obligations from Merrill Lynch and the BAC holding company to the FDIC insured retail deposit division. Along with this information came the revelation that the FDIC insured unit was already stuffed with $53 trillion worth of these potentially toxic obligations, making a total of $75 trillion.

Many big banks, including Bank of America, issue derivatives because, if they are not triggered, they are highly profitable to the issuer, and result in big bonus payments to the executives who administer them. If they are triggered, of course, the obligations fall upon the corporate entity, not the executives involved. Ultimately, by allowing existing gambling bets to remain in insured retail banks, and endorsing the shift of additional bets into the insured retail division, the obligation falls upon the U.S. taxpayers and dollar-denominated savers.

Even if we net out the notional value of the derivatives involved, down to the net potential obligation, the amount is so large that the United States could not hope to pay it off without a major dollar devaluation, if a major contingency actually occurred and a large part of the derivatives were triggered. But, if such an event ever occurs, Bank of America’s derivatives counter-parties will, as usual, be made whole, while the American people suffer. This all has the blessing of the Federal Reserve, which approved the transfer of derivatives from Merrill Lynch to the insured retail unit of BAC before it was done.

The FDIC opposed the move, but there is nothing the FDIC can do, except file a petition for a writ of mandamus in court, against the Federal Reserve, seeking a declaration that the approval was illegal. But, the FDIC would lose, because Congress has given the Federal Reserve Board ultimate power to do whatever it wishes.

So, the bottom line is this: When something bad happens, and the derivative obligations are triggered, the FDIC will be on the hook, thanks to the Federal Reserve. The counter-parties of Bank of America, both inside America and elsewhere around the world, will be safely bailed out by the full faith and credit of the USA. Meanwhile, the taxpayers and dollar denominated savers will be fleeced again. This latest example of misconduct illustrates the error of allowing a bank-controlled entity, like the Federal Reserve, complete power over the nation’s monetary system. The so-called “reforms” enacted by Congress, in the wake of the 2008 crash, have vested more, and not less, power in the Federal Reserve, and supplied us with more, rather than less instability and problems.

This is not an isolated instance. JP Morgan Chase (JPM) is being allowed to house its unstable derivative obligations within its FDIC insured retail banking unit. Other big banks do the same. So long as the Federal Reserve exists and/or other financial regulatory agencies continue to be run by a revolving door staff that moves in and out of industry and government, crony capitalism will be alive and well in America. No amount of Dodd-Frank or Volcker rule legislation will ever protect savers, taxpayers or the American people. Profits will continue to be privatized and losses socialized.

Read more about how Bank Of America Dumps $75 Trillion In Derivatives On U.S. Taxpayers With Federal Approval.

One thought on “BofA Dumps $75 Trillion In Derivatives on U.S. Taxpayers”