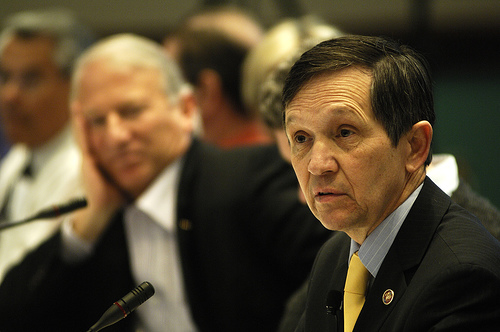 RAW STORY– Two US lawmakers – a Republican and a Democrat – proposed a bill this week demanding the withdrawal of all US troops in Pakistan, where they are conducting covert operations against militants.

“We have known that US forces have been operating in secret inside the territories of Pakistan without congressional approval,” Democratic Representative Dennis Kucinich said Friday, pointing to reports the United States was stepping up its presence there.

He said the House of Representatives was expected to take up the resolution next week. The measure was introduced late Thursday.

Kucinich said the covert operations were a “violation of the 1973 War Powers Resolution introduced after the Vietnam War that only allows the president to send US armed forces into military operations abroad if Congress approves the decision or if the United States is under a serious threat or attack.”

“It is our constitutional responsibility as members of Congress to act,” Kucinich added.

Washington is working to deepen engagement with the nuclear power across the border from war-wracked Afghanistan and overcome rife anti-Americanism after years of perceived neglect of bilateral relations.

Joining Kucinich on the bill was Ron Paul, a Texas Republican who espoused libertarian views during his failed 2008 bid for the presidency.

Paul said the US military has “significantly increased” its operations in Pakistan, without providing figures.

He also noted the increased use of unmanned drone attacks in Pakistan since President Barack Obama came to office a year and a half ago.

“This increasing US military activity in Pakistan has little to do with protecting the United States and in fact is creating more enemies than it is defeating,” Paul said.

“The administration, like its predecessor, is misusing language in the original post-9/11 resolution to prosecute a wider regional war and Congress is sitting quietly on the sidelines. This must stop.”

The Pentagon says only a small number of US soldiers operate in Pakistan, mostly Special Forces tasked with training Pakistani troops along the Afghan border. Those US forces are not officially engaged in combat operations.

Kucinich previously tabled a resolution demanding that all US troops withdraw from Afghanistan, but it was rejected in March.

Washington has branded the rugged tribal area along the Pakistan-Afghanistan border a global headquarters for Al-Qaeda and other militants, who use it as a base to launch attacks on US-led forces in Afghanistan.

But the presence of US troops is a sensitive issue in Pakistan due to prevailing anti-American sentiment in the country, as well as conspiracy theories about US military operations and a perception that they threaten Pakistani sovereignty.