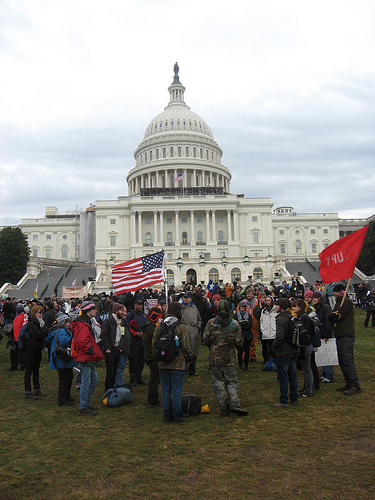 The hallowed halls of a once respected US government are now filled with the hollow promises of an impotent governing class. In a political landscape riddled with indecision, political pageantry and growing despotism, the people are hungry for a leadership that represents them. Instead, we are faced with a corporatocracy – one hellbent on the consolidation of wealth and power rather than the proliferation of freedom and justice.

Believe it or not, there was a time when representative government worked on behalf of the people, but those days have long succumbed to the political distortions of misguided leaders. Thus, the age old questions remain: If it is possible to revitalize the self-governing power potential of the ‘We the People’, then what might be a viable alternative or how might we augment the current system to provide the infrastructure for a change of guard? Perhaps by looking to the revolutionary ideas of the internet and the co-creative force of its users and developers we can begin to find the answers.

One of the groundbreaking ideas that the internet has provided is that of open-source development, which promotes the universal access to a product’s design as well as redistribution of that design. This developmental model set by programmers and software developers exemplifies the highest order of free trade, and serves to utilize the best ideas for the overall benefit of the system. If we are to apply a similar model as the framework for government, we begin to see parallels between open-source programming and the ideas put forth by America’s founding fathers.

Unfortunately, the fundamental ideology of the US political system has been absent from view for quite some time. The growing disconnect between the people and their representatives has led to a lag in public representation, thus resulting in a severe lack of people’s interests and ideas being properly expressed by US legislation.

A recent example of this contrast is illustrated in the debate over the legalization of marijuana, where an overwhelming public support for legalization has not been echoed by the government, nor the legislation regarding the issue. However, the ‘War on Drugs’ is only one of many examples which illustrates the delay we are experiencing in our current democratic process.

In a world where efficiency and speed are essential to human progress, it’s unfortunate that our legislative powers have become cumbersome and inefficient. However, the internet’s crowd-sourcing concept could provide us with the possibility to facilitate some level of autonomy, where the average individual has the ability to exercise their right to self-representation.

The idea of crowd-sourcing was first referenced by Jeff Howe of Wired magazine, and can be best understood as the purposeful re-appropriation of resources for achieving a particular goal by an indeterminate group of individuals. Much like open-source programming which relies upon a multitude of contributors, so too does crowd-sourcing rely upon the involvement and contributions of the collective.

Endless possibilities could present themselves once we focus the “spare processing power of millions of human brains” towards the evolution of political representation. For example, a truly participatory system could unfold which no longer relies upon single individuals to represent the will of many, but instead allows all people to become micro-leaders in a process of collective representation. Although this idea may seem farfetched, it’s not far from the framework that helped to build this country’s political ideology.

The founding fathers believed that public office should be held by its citizens, to act as contributors as well as beneficiaries in an effort to provide society with a fair and just governing body. As we continue to evolve socially and intellectually, it’s the hope that our leadership would incorporate the enlightened ideas of the past as well as those that propel us into the future. If they don’t, ‘We the People’ can and will find ways to represent ourselves through active participation in the political process.

As more and more people wake up to the corruption of the current system and the lack of political reflection on a federal level, passive acceptance of oligarchical rule will end, soon to be replaced by an active contribution in the political progress of this country, and ultimately, the world.