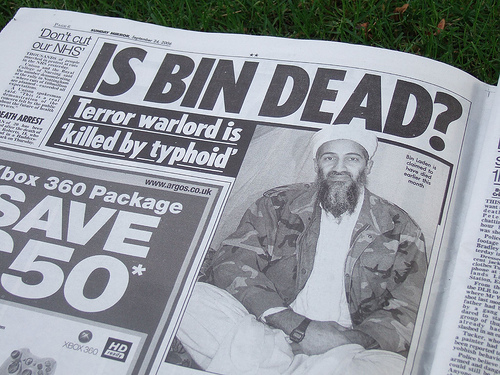 MEDIA ROOTS – The Pentagon and the corporate media establishment are again attempting to control the 9/11 and War on Terror narrative by claiming that they are considering legal action against former Navy SEAL Matt Bissonnette (a.k.a. Mark Owen) for publishing his book No Easy Day. The supposed context for the publication of his story, scheduled for release on Tuesday, is that the veteran did not offer the manuscript to the Department of Defense for prior review and he now may face legal recourse from the agency. Additionally, his name was leaked by the Associated Press last week, resulting in possible threats to his life.

The book was originally scheduled for release on September 11 of this year. It was an attempt made by Owen to remain apolitical about arguably the most politicized event of the decade. But the current debate appears to be scripted for the history books as several hard questions about the death of bin Laden continue to be ignored and will most likely not be answered in the upcoming publication distributed by Dutton.

The first and probably the most obvious discrepancy is if military intelligence had known of his precise location for eight months prior to the raid, then why hasn’t more proof of his whereabouts been released to the American public? “Despite the intense surveillance effort the CIA was unable to obtain a photograph of Bin Laden or a recording of the voice of the mysterious man, presumed to be the al-Qaida leader,” states the Guardian the week after the raid.

With such precise knowledge of the bunker, why was bin Laden not captured for trial in a court of law? Attorney General Eric Holder answers that the operation was not only lawful according to the Authorization for Use of Military Force (2001) but was simply an act of national self-defense. But in a nation where children are taught the belief of liberty and justice for all, it’s quite contradictory for this nation’s leadership to not protect and promote these ideals worldwide.

Furthermore, Owen recounts a scene where bin Laden may actually have already been dead upon their arrival. “At first it was funny because it was so wrong,” Owen reflected in his account of May 1, 2011. This version is in direct conflict with that of the White House in which bin Laden was allegedly reaching for a weapon at the time of the fatal shots. Owen confirms that the suspected terrorist was unarmed at the time of his death and their team may have just been on a kill mission.

But the greatest and most pertinent question has still not been asked: was Osama Bin Laden actually killed on May 1, 2011? This past March, the online hacker group Anonymous was able to obtain emails from the intelligence analysis group Stratfor which directly contradicts the official story about what happened with bin Laden’s body after the raid. While possibly the smoking gun of a White House cover-up, several news stories reported before the raid also directly contradict the official narrative. Below are a just few examples:

2001 – “Usama bin Laden has died a peaceful death due to an untreated lung complication, the Pakistan Observer reported, citing a Taliban leader who allegedly attended the funeral of the Al Qaeda leader.” [Fox News]

2002 – “Pakistan’s president says he thinks Osama bin Laden is most likely dead because the suspected terrorist has been unable to get treatment for his kidney disease.” [CNN]

2006 – “Saudi intelligence services seem to be sure that Osama bin Laden is dead. The elements gathered by the Saudis indicate that the head of Al Qaeda was the victim, while he was in Pakistan on Aug. 23, 2006, of a strong case of typhoid fever that led to a partial paralysis of his lower limbs.” [France’s Directorate-General for External Security]

2007 – “… he also had dealings with Omar Sheikh, the man who murdered Osama bin Laden.” [Benazir Bhutto]

2009 – “What if everything we have seen or heard of him on video and audio tapes since the early days after 9/11 is a fake – and that he is being kept ‘alive’ by the Western allies to stir up support for the war on terror? Incredibly, this is the breathtaking theory that is gaining credence among political commentators, respected academics and even terror experts.” [Daily Mail]

The War on Terror is riddled with unanswered questions that range in depth and consequence. From numerous eyewitness accounts of what actually hit the Twin Towers to this morning’s attack at a US military base, the corporate media hardly scratches the surface of investigation, often simply regurgitating government propaganda. But as more individuals combat societal ignorance, becoming proactively aware of the atrocities committed by their military establishment and the history of their empire, the War on Terror is destined to end.

One thought on “No Easy Truth: Continuous Casualty of Conflict”