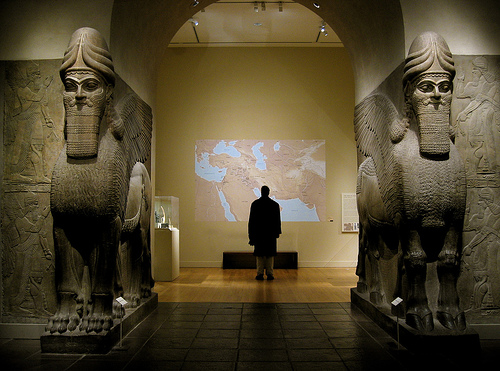 CHRISTIAN SCIENCE MONITOR– He could see the mob coming, and feared not for his life, but for the treasures of Iraq’s ancient past – some of them 7,000 years old – that had been left in his care.

“I took my white underpants off and put them on a stick and ran up the street to the US Marines,” says archaeologist Mohsin Kadun. “I asked them – no, begged them – to help me preserve our treasures, but they would not drive down the street.”

This past weekend, the frenzy of looting that has engulfed Baghdad since US troops took control of the city last Wednesday spread to the one place archaeologists worldwide hoped might be spared: the Iraqi National Museum. As hundreds of looters ran down the halls, stealing or smashing almost 70 percent of the repository’s valuable statues, carvings, and artifacts, Mr. Kadun, a 30-year museum employee, stood helpless at the gates, screaming.

Iraq has been called one giant historic site, and for 80 years its national Museum has been the repository of irreplaceable records and collections of ancient art and artifacts from the country’s Babylonian, Assyrian, and Mesopotamian past. The ransacking has caused incalculable loss to Iraq’s, and the world’s, cultural heritage, experts say. “If Iraq has anything besides oil, any meaning for humanity, it is in this history,” says Paul Zimansky, professor of Near Eastern archaeology at Boston University.

Before the war began, Kadun was in charge of moving artifacts into two giant vaults to prevent them from crashing off their pedestals as US bombs shook Baghdad. Other archaeologists also took protective measures. A group of scholars, conservators, and collectors, including MacGuire Gibson of the University of Chicago, the leading US researcher in Mesopotamian archaeology, drew up a list for the Pentagon of more than 4,000 crucial Iraqi museums, monuments, and archaeological digs, urging commanders to spare them. “The museum was at the top of that list,” Dr. Gibson says.

When the bombs stopped falling, the museum stood intact, its marvelous stores untouched. But US forces apparently made no plans for defending it against plunder.