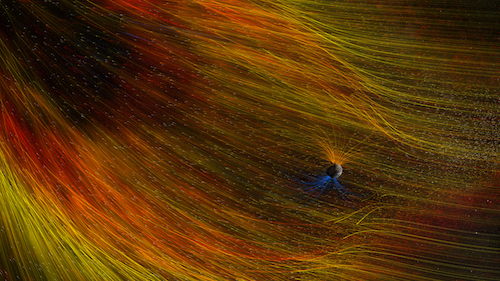 One human family living on one organism. Yet man is embroiled in a war against himself.

Unfortunately this blatant truth hasn’t yet been realized by the vast majority of humans living on earth.

The wars against ISIS, Russia, and now laughably Venezuela are dominating headlines in the latest front of the information war, but a far more deadly battle is being carried out against the organism we all share.

We face the most severe environmental crises in history with deforestation at a rate of 36 football fields per minute, floating trash islands the size of Texas in the Pacific, and half the world’s species being wiped out in the last 40 years as a result of habitat loss and pollution. In just the last 30 years, climate change has already caused a tripling of natural disasters, with scientists predicting an irreparable tipping point around year 2020, the same year Obama pledged to cut US carbon emissions by 17%.

But how can climate change solutions be taken seriously without a massive overhaul of the agricultural industry and complete termination of the military industrial complex? The Pentagon is the largest polluting institution in the world and is exempt from all international climate treaties.

The climate change disinformation campaign has gotten to the point of such absurdity, that Florida’s State Environmental Protection Department has banned the use of the terms climate change and sustainability in all emails and reports. It’s an issue that should supersede politics. But a corporate controlled press run by oil and gas won’t dare undermine its sponsors.

Of course the establishment showcases an alternate reality. Media hysteria abounds about missing planes and Iran’s non existent nukes, yet there’s an eerie calm about the issues that most impact us, and what we can do to fix them. The population remains dumbed down, complacent and willfully blind.

Maybe the CEOs, lobbyists and politicians are shortsighted because they’re building their own elysium and don’t give a fuck if we all die, but the majority of them are inevitably just changing deck chairs on the Titanic – and they know it.

Deep down everyone knows the truth. Every last vestige of this precious planet is being pillaged without consequence. Endless consumption and unfettered capitalism cannot and will not last. And every empire falls. That’s just a matter of time.

The system blatantly protects the bottom line and resists all substantial change with military force and police aggression to keep the old guard. The elites at the helm will never capitulate their security for the good of humanity.

I’m more than happy to be a part of an annual event that showcases a different future than the dark path humanity is bulldozing down. So thank fuck for Peter Joseph’s not only incredible three part Zeitgeist documentary series, but also for his follow up work with Culture in Decline – all of which dismantle the toxic conventional wisdom that strangles our mental development.

Seeing the power of video to shatter religious, political and economic dogma inspired the hell out of me. But I was also moved by the trajectory of the series, which first deconstructed systems of control and then presented an entirely new realm of possibilities.

I used to be an anti-war organizer. But once I saw the media selling the Iraq war I realized something was very systemically wrong, and it crossed all party lines. Media became my number one battle, because if you don’t have a platform to tell your story then no one will hear it.

I started Media Roots as a hub for censored information and it grew into a multimedia citizen journalism project, which eventually brought me to RT and Breaking the Set. It was a dream job to attack power on an international platform, but I decided I want to be meeting the people behind the stories and telling them independent from any state or corporate entity.

I don’t just want to react to the mainstream media’s circle jerk of fuckery.

Bush lackey Karl Rove once brazenly told New York Times reporter Ron Suskind in 2004 “We’re an empire now, and when we act, we create our own reality. And while you’re studying that reality… judiciously as you will… we’ll act again, creating other new realities, which you can study too, and that’s how things will sort out. We’re history’s actors… and you – all of you – will be left to just study what we do.”

Unfortunately, Rove’s right. Reality is dictated by an out-of-touch war mongering elite that doesn’t apply to the reality we live every day. But it’s only able to sustain on fear and war. And there’s nothing that terrifies the establishment more than a populace not living in fear.

Clearly I don’t have all the answers, and I don’t think anyone here claims to. But a resource based economy is one of the most thought provoking and groundbreaking solutions I’ve seen to the crisis of civilization we face.

We don’t have to wait for anyone but ourselves to start implementing the ideals either, because we are all agents of change and vessels of truth that can push our communities towards seismic sustainable shifts in the way we live right now.

Other countries already have a different approach. I recently had the chance to visit Cuba, and not only does the country have an organics renaissance, but there aren’t commercials telling you what a worthless piece of shit you are, or corporate chains eviscerating local culture.

But most spectacularly is Cuba’s medical internationalism. Cuba sent the world’s largest contingent of medical professionals to Liberia, Sierra Leone, and Guinea to fight the ebola epidemic, and has healthcare workers operating in 66 countries. The country also has a medical school that trains international students to become doctors for free.

Of course, this wasn’t out of pure altruism, the long imposed embargo on Cuba forced it to become self sufficient and fiercely community oriented. The country is far from perfect, but the obvious takeaway remains the tremendous amount of good that can be done with such little resources. If that’s what an economically crippled nation can achieve, what can the richest one in the world do?

Every government that has tried to incorporate different economic models gets systematically undermined with regime change attempts. USAID is still spending $20 million dollars a year in Cuba to undermine the government despite the normalization process. 56 years after the Cold War, and the US government still can’t let a small socialist nation live in peace.

In socialist Venezuela, Obama just announced the country poses and quote “extraordinary threat” to national security and that he has quote “deep concerns” about its human rights abuses. Meanwhile America’s biggest ally Saudi Arabia summarily carries out beheadings and public floggings to bloggers who criticize the king.

Clearly these issues are deep rooted and deeply interconnected. This is about hegemony, and the clutches of capitalism won’t give up easily. The system can’t afford alternatives, and we’ve seen how far it will go, with no remorse. It’s a machine that runs on death and destruction, having institutionalized structural violence that kills millions of our brothers and sisters every day.

No one has to go without water in the streets of Detroit, or freeze to death in bombed out Gaza, because we have the resources to provide everyone. Would you let your mother or brother starve on the streets? No, because we belong to the commons and the commons belongs to us.

The revolution of values is the extension of empathy, understanding, compassion and humility – globally. Which means shattering the illusion of me as separate from you or us as separate from the dirt underneath our concrete jungle. It comes with expanding consciousness and media literacy. And most importantly, it’s about building alternatives ourselves. That’s why I believe that this movement is unstoppable and the ideas it’s spawned will create our reality of a sustainable future.

Because if we don’t, we’ll just become casualties in the war being waged against us and every living thing on this planet.

On this pale blue dot.

As Carl Sagan said, “In our obscurity, in all this vastness, there is no hint that help will come from elsewhere to save us from ourselves.”