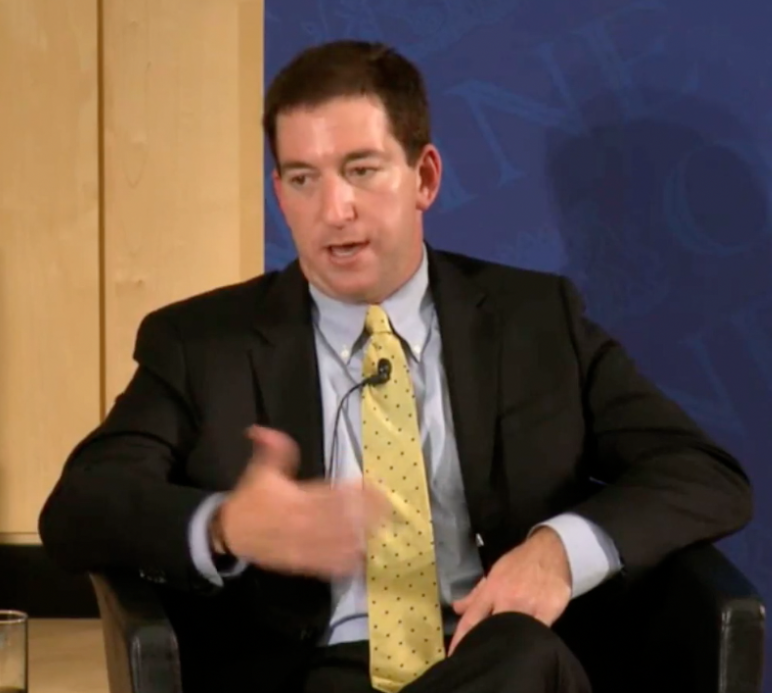 Glenn Greenwald was asked all-too-familiar stock questions on mainstream programs like Meet the Press and Charlie Rose during his book tour for No Place to Hide. Although he was put on the defense in almost every segment, Greenwald held firm and consistent when combating the adversarial tone of US establishment journalists.

Over the course of his high profile interviews, many may have missed his lengthier and more candid talks in Hamburg, Amsterdam and at Harvard. Here’s some of our favorite quotes from those lectures that you probably won’t hear on the corporate media.

“I think [Obama is] due a lot of credit because it really is impressive that he’s able to say those things with a straight face and not bursting out in laughter, I find that skill really really extraordinary, and he’s very good at it and I think we ought to acknowledge it in fairness.”

“The greatest hope for saving America’s war fighting ability and to stem the tide of anti-war sentiment in Europe was for then-Senator Barack Obama to become president, because what that would do is transform these wars from George Bush’s face, which the world had grown increasingly tired of and had been viewed as this kind of swagger and unilateral cowboy that was particularly hated in Europe, into this kind, sophisticated, progressive face of Barack Obama.”

“And by making Obama the face of these wars it would transform all this anti-war sentiment into people who were willing to acquiesce to the war if not outright support it. [The CIA] knew that he would continue all of these policies, but his branding was so pleasant and especially in Western Europe, so beloved that it would be an immense asset for the National Security State.”

“There’s so much rhetoric about the US government, [and Obama is] an effective salesmen around the world for this myth of American greatness. I think one of the principal things that this debate over the last year has done is open people’s eyes about the reality of president Obama vs. the image.”

“I live in Brazil where he had been beloved and across every Brazilian newspaper is very menacing pictures of him connecting him with spying.”

“We have been criticized very predictably and very inconsequentially from what I will call for just  lack of a better term: ‘the Right’, which is, you know, primarily Democrats who voice this critique that our disclosures are going to help the terrorists and result in the deaths of innocent people and all of that. I was on CSPAN two days ago, and every time the host said ‘And now we’re going to go to the Democrat line’ I knew I was about to be called a traitor. It was completely reliable.”

“Those very same people who had been saying just two weeks earlier that [Snowden] was clearly a Chinese spy suddenly switched on a dime saying obviously this is an operation by Vladimir Putin.”

“It’s really remarkable how seriously all of that has been taken despite the fact that there’s zero evidence to support any of it and mountains of evidence to negate it.”

“There is this amazing dynamic in American political discourse which is that certain words drive Americans instantly into hysteria and irrationality. One of them is terrorism, the minute you say that everybody screams and jumps under the bed, not quite as much as they did before but still.”

“The much scarier word for people is Russia, this is a word that if you really want to scare an American and make them go away just whisper Russia in their ear and they’ll start running down the street.”

“On television every interviewer would say to me ‘well what about Edward Snowden he must be completely miserable, i mean he’s in Russia‘ I guess they assume that all 160 million people who live in Russia are instantly and automatically miserable from the time of their birth until they die like it’s just one big gulag.”

The Role of Journalism

“The Washington Post, New York Times and other media outlets have been more aggressive because they would have been shamed if they hadn’t been.”

“I think it’s much more powerful as a journalist to be honest about the way you see the world and the assumptions that you’re making than it is to try and deceive your readers into pretending that you float above opinion. I think that passion and vibrancy and soul are necessary for good journalism, the attempt to drain all that out of it has made journalism not just weak but boring and sort of neutered.”

“I’ve been pretty scornful of the notion that there is this active plotting among journalists and media outlets to coordinate their storyline.”

“Within 24 to 48 hours literally after we first introduced Snowden to the world, there was this immediate consensus among all these media elites that they were completely capable of taking this person that they had never heard of before and didn’t know the first thing about and were diagnosing him, like clinically diagnosing him, psychologically assessing all of his pathologies. They all settled on this coordinated script that he was a ‘fame seeking narcissist’  If you Google it you will find this phrase over and over again.”

“Where did that come from, that ‘fame seeking narcissist’ thing, I really want to know.”

“There’s all these unwritten rules that govern the ways journalists are supposed to behave.”

“You’re not supposed to be too aggressive in condemning the government, you’re supposed to pretend to have respect for their fearmongering claims about why you shouldn’t be publishing.”

“I never used to be able to understand why in response to the leaking of the Pentagon papers the response of the Nixon administration was to break into the office of his [Daniel Ellsberg’s] psychiatrist in the hope of obtaining his psycho-sexual secrets. It never made any sense to me. It seemed like the ultimate non sequitur, ‘Oh look we have documents showing that the US government has been systematically lying to us for years about the Vietnam war’ and the response would be ‘well Daniel Ellsberg is a swinger’.”

“It’s an incredibly effective means of excluding somebody from decent company, and making everything they say instantly dismissed for that reason.”

“There are chat programs such as Pidgin and OTR that provide relatively good protection, there’s the TOR browser that lets you use the internet anonymously, the Tails operating system.”

“The problem is all these names are pretty daunting to people who haven’t heard them before…I think the tech community needs to develop these tools to make them much more friendly…Once that happens and that will happen, encryption will become the default means of how people communicate on the internet.”

“I do use PGP email, and in part I use it because I happen to have read a lot of NSA documents talking about how frustrated they are at their inability to invade it.”

“If you use PGP email, the NSA actually looks for the people who are using encryption, because in their twisted minds, your desire to shield our communications from their prying eyes is evidence that you are suspicious.”

“Amazingly [Laura Poitras] filmed virtually everything that took place in Hong Kong, our interaction with Snowden, all of the conversations we had, which is going to be in a documentary she releases in the Fall.”

Check out Greenwald’s lengthiest and best public appearances so far in May 2014:

Glenn Greenwald at CATO Institute: No Place to Hide

Written and compiled by Robbie Martin AKA @FluorescentGrey