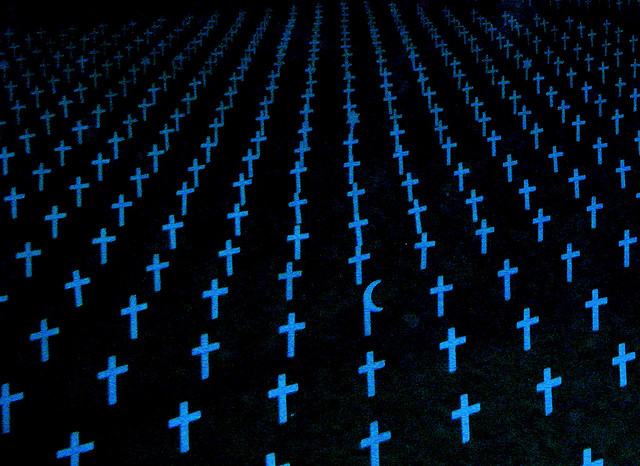 Summer is here and the stench of war is all around. Or, as Bob Marley put it, ‘everywhere is war’.

Start with the commemorations over a five-week span of Memorial Day, Flag Day and Independence Day, all presented varyingly as celebrations of our war dead, symbols of our greatness, the freedoms we love so dearly and seek to export to every corner of the world and, perhaps most important, the unquestioned rightness of our cause.

In reality, the celebrations are of imperialist war, with the talk about the hallowed dead just so much cover for the murderous nature of US foreign policy. Celebrating the dead – note that the dead celebrated are just the American dead, not any of the millions killed by US aggression or client states – is a no-lose proposition designed to render anyone who asks the wrong questions a traitor or a terrorist. The notion that the US regularly commits war crimes and that polished, well-educated men like Barack Obama are war criminals is unthinkable; war criminals look like Osama bin-Laden and Saddam Hussein and those other nasty people far away, over there.

It’s also the summer of the centennial of the start of what in its time was known as the Great War, the greatest blood-letting in history except for that of the Second Great War barely two decades later. One thing we can be sure is that the lessons drawn from mainstream discussions of World War I will be all the wrong ones. Worse, the spectacle of the intelligentsia waxing eloquent about the horrors of war while unflinchingly cheering on the warmakers in Washington will be accepted by one and all of their kind as perfectly reasonable – as beyond discussion, in fact.

In recent weeks, meanwhile, mainstream commentators have been shocked to discover that things in Iraq are not alright, in fact are worse than at any time since the second US blitzkrieg in 2003. Gee, who knew that an invasion predicated on a lie of weapons of mass destruction, designed to secure control of massive oil supplies, would go wrong? The political class and intelligentsia pretended they didn’t, but millions around the world who demonstrated against the invasion in the weeks before it was launched certainly did. And one of the points those demonstrators underscored was that a US invasion would fuel sectarian divisions and violence, precisely as has happened. Al-Qaeda, which did not exist in Iraq prior to the invasion, now flourishes while a new group, the Islamist State of Iraq and Syria (ISIS), rampages through the country.

The response of many elites in the US, naturally, is for more war. Calls from certain factions for a third US invasion are growing louder and Obama likely would have done so by now if not for grave ruling class concerns about how much more a war-weary populace can endure. Weary or not, people in the US came together in a remarkable groundswell of protest last summer that prevented Obama from attacking Syria. Given Obama’s penchant for resolving virtually any problem with violence, however, as in his determination to provoke war with Russia in Ukraine, his reluctance to invade Iraq may be temporary.

Also on the war front is the Veterans Affairs’ disgraceful neglect of ex-soldiers in need of medical care. For years, political elites have been slashing benefits for veterans while increasing spending on weapons and cutting taxes for the Super Rich. That the problem came to a head with a Democrat in the White House is simply an accident of timing, and it is especially outrageous that the most enthusiastic cheerleaders of the illegal Bush-Cheney invasions, as well as reductions to the VA’s budgets and the tax cuts for 1%, now pretend that they care about soldiers.

Equally farcical is the commencement of yet another round of hearings on the deaths of four Americans in Benghazi. Such hearings would certainly be valuable if everything related to US actions in Libya since the launch of the 2011 assault were up for review, but there is virtually no chance of that happening. The deaths of tens of thousands of Libyans in yet one more illegal military strike, as well as the resulting chaos and violence in that country, is of no concern to those who long for the good old days of Bush-Cheney interested only in scoring political points.

Last but not least is the saga of the much-vilified Bowe Bergdhal, a young man who came to see the criminal nature of the US invasion of Afghanistan. The refusal of working class youth to fight for Empire is the ruling class’s biggest nightmare and the attacks on Bergdahl, like the show trial that convicted Chelsea Manning, exemplify how far they will go to punish those in uniform who dare challenge their objectives. A hidden aspect of the movement that ended US carnage in Southeast Asia is that it was the widespread opposition of soldiers, both as embodied by organizations like Vietnam Veterans Against the War as well as active duty resisters, that decisively turned the tide.

This development was so alarming that two massive disinformation campaigns were immediately launched: the myth of the hostility of the anti-war movement for returning soldiers that sought to drive a wedge between active duty and homefront resistance (see Jerry Lembcke’s The Spitting Image: Myth, Memory and the Legacy of Vietnam); and the completely fraudulent MIA blitz (expertly exposed by Bruce Franklin in MIA, or Mythmaking in America) concocted by the Nixon Administration to shift attention away from the death and destruction wrought by the US to the plight of nonexistent prisoners of war.

Because preventing any similar resistance among soldiers is central to imperial objectives, discussion has largely avoided what Bergdahl actually said about his service in Afghanistan, including his telling declaration in a 2009 e-mail to his parents: “The future is too good to waste on lies and life is way too short to care for the damnation of others as well as to spend it helping fools with their ideas that are wrong. I’ve seen their ideas, I’m ashamed to even be American. The horror of the self righteous arrogance that they thrive in.” Rather than joining in the Bowe Bergdhal lynch mob, US soldiers everywhere, not to mention those with loved ones in the military, would do well to heed his words and experience.

Lastly, the same standard that applies to the war crimes of others applies to the US. As articulated by Robert H. Jackson, chief US prosecutor at Nuremberg, a war of aggression such as committed by the US against Afghanistan and Iraq “is not only an international crime; it is the supreme international crime, differing only from all other crimes in that it contains within itself the accumulated evil of the whole.” In such a circumstance, what Bergdahl did was proper and, it could be argued, obligatory for anyone party to war crimes.

So amidst the holiday flag waving and speeches that glorify imperialism, we should support prisoners of conscience like Chelsea Manning. We should demand that all services veterans require be provided, that US bases around the world be closed, that soldiers be returned home and that the US cease its campaign of endless aggression. And as enticing as the military may seem in such desperate economic times, we should counsel young people to stay away no matter how bleak the alternatives may be.