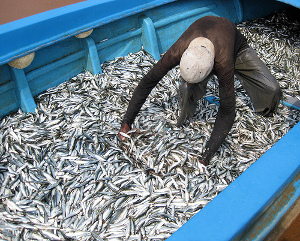 FAST COMPANY– Scientists have warned that without drastic changes “this century is the last century of wild seafood.” The world’s current trajectory of falling catches and rising consumption is projected to end in 2050 with the collapse of nearly 100% of exploited seafood populations. But those are just abstract numbers. Now a new report tells us the precise day each year when we have eaten more fish than the planet can sustain. In Europe, that day has already passed. Every fish consumed now by Europeans is one that couldn’t come from their own fisheries.

In 2011, according to the study by the New Economics Foundation this “fish dependence day,” fell on July 2, the day when–theortetically–at least, the EU pulled all the fish it could from its waters (NEF extrapolates from the most recent FAO data of 2008). This dependence date has crept forward for more than a decade and is now a full month ahead of where it  was in 2000. The reasons are well known. Since 1950, governments  have deployed policies, loans, and subsidies to build up big industrial fishing operations that feed the world’s growing appetite for seafood. Escalating competition for a dwindling pool of fisheries has had predictable consequences: the world’s catch peaked at 90 million tons in the late 1980s, and declined ever since to 79.5 million tons in 2008 (the most recent year statistics are available).

The NEF’s study, while detailing which EU countries consume the most seafood (Portugal per capita), the most popular species (tuna, salmon, and cod primarily), and other trends, it also offers solutions it thinks can reverse the situation and prevent the collapse of marine species that, scientists say, may still be saved with proper management.