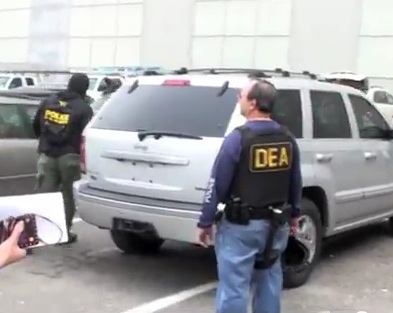 MEDIA ROOTS – You often hear the term Gulag and think of a secret prison in a third world dictatorship, where its purpose is to break you down, humiliate and torture you.  This style of imprisonment has been frequently used by members of the US military in Afghanistan, Gitmo and Iraq.

Torture and ‘enhanced interrogation techniques’ fall outside of the realm of the Geneva Conventions since those imprisoned are deemed ‘enemy combatants’ instead of prisoners of war.  Labeling such prisoners as ‘enemy combatants’ is nothing more than a flimsy legal loop hole that gives the military carte blanch to treat them however they would like, without due process.  It’s hard to believe that someone would experience a similar fate on American soil.

Recently, in San Diego, California, a UCSD student named Daniel Chong was arrested during a 4/20 marijuana drug raid and left in a holding cell without charges for over five days.  He was without food, water, toilet, or human contact of any kind.  Chong eventually resorted to drinking his own urine and eating a bag of white powder he discovered in the cell, which turned out to be meth amphetamine–only exacerbating his psychotic state.  He described attempting to commit suicide with broken glass from his glasses and said that the he literally lost his mind and didn’t think he would survive.

The DEA and San Diego police claim that this is a unique incident that rarely ever happens.  They chalk it all up to a “mistake,” stating that someone simply “forgot to go check on him.”  Whether or not the person [or people] accountable for driving Chong insane and leaving him to potentially meet his demise for the crime of smoking marijuana is yet to be seen.

HIGHLANDER NEWS – For nearly five days, Chong sat alone in a room with no food, no water and no toilet. Chong told CBS News that he kicked the door many times and screamed for help, but his cries were ignored. “I just couldn’t believe that this was legal,” Chong told the AP. “I’m thinking ‘no way.’”

He drank his urine three times due to dehydration and unknowingly consumed methamphetamine after finding the drugs in the cell; the DEA has yet to explain why the methamphetamine was found in the holding cell.

“The DEA’s protocol was so sloppy that somebody who was a previous prisoner secreted a small amount of meth in a plastic bag inside a blanket,” stated Chong’s attorney, Gene Iredale, in an article by the LA Times. It is unclear whether the hallucinations that Chong experienced were caused by the drugs or other severe ailments such as starvation.

Chong told the New York Times that on the fourth day, the lights shut off in his holding cell. Chong, contemplating suicide, chewed into his glasses and attempted to carve the words “Sorry mom” into his arm using a glass shard. “I pretty much lost my mind,” he told the Associated Press.

Agents found Chong on the afternoon of April 25, covered in his own feces but still conscious. “He is glad to be alive,” Iredale said of Chong. “He wants to make sure that what happened to him doesn’t happen to anyone else.”