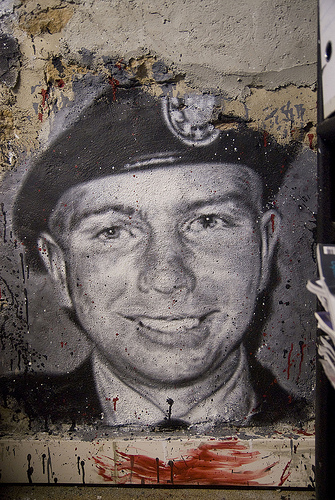 MEDIA ROOTS — As scores of political prisoners languish in U.S. prisons and solitary confinement and California prisoners wage hunger strikes to call attention to inhumane conditions inside the prison-industrial complex, Bradley Manning, held by the U.S. military, ranks among the most high profile and highly targeted by the U.S. government.

Various reports have directly confirmed Manning has endured cruel and inhumane treatment, including being stripped nightly, for a crime of which he was never convicted, for an act, if true, should warrant protected whistleblower status.  After a year and a half of torture, including 250 days of identity-erasing solitary confinement, Manning is finally meeting his accusers with a Pretrial Hearing set for December 16th, 2011.

BRADLEY MANNING — PFC Bradley Manning is accused of uncovering the facts behind a system of foreign policy that routinely hides abuse from public scrutiny. “If convicted of all charges, Manning would face a maximum punishment… of confinement for life” the U.S. Army reports.

If he is the source of the WikiLeaks revelations, he is the most significant whistle-blower in a generation. According to journalists, his alleged actions helped motivate the democratic Arab Spring movements, shed light on secret corporate influence on our foreign policies of the sort #OccupyWallStreet opposes, and most recently contributed to the Obama Administration agreeing to withdraw all U.S.troops from the failed occupation in Iraq.

Bradley Manning, who turns 24 on the date of our protest, is a young soldier from a working-class background who believed that people should know the truth, “no matter who they are… because without information you cannot make informed decisions as a public.”

He now faces opposition from embarrassed politicians and military officials, and potential life in prison on a poorly defined military charge of “Aiding the enemy through indirect means.” If words attributed to Bradley Manning are accurate, it appears that he was motivated only by a desire to expose questionable and illegal actions by our leaders. This information had been concealed — not to protect us — but in order to avoid accountability. According to several who served in the same unit as Manning, this information had already been made available to Iraqi Army recruits — but not the American public. It is absurd for our government to suggest that the American people is somehow “the enemy.”

As founding father Patrick Henry wrote, “The liberties of a people never were, nor ever will be, secure, when the transactions of their rulers may be concealed from them.”

Bradley’s pretrial hearing date has been announced, and this is the time to take our support of Bradley into the streets. Bradley Manning was nominated for the Nobel Peace Prize last month, and topped the UK Guardian’s Readers Poll. Now the world watches the proceedings of this case while judging our country as a whole.