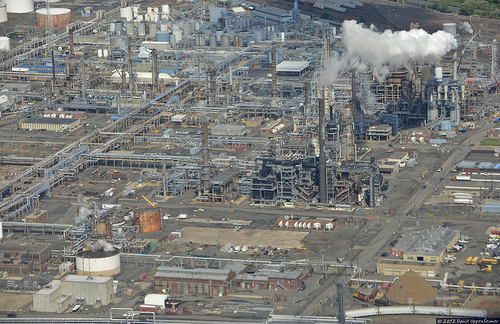 MEDIA ROOTS – The global petroleum industry has long been the antagonist for environmental and animal-rights advocates. But more recently, “Big Oil” has emerged as a literal threat to democracy for its vast political influence and ability to contrive wars for profit. A report released last month by the National Wildlife Federation exposed to what extent the oil industry, along with coal, affect elections in America.

Speaker of the House John Boehner tops the list of congressman receiving financial aid from the energy industry. Many of these donors stand to benefit from the proposed construction of the Keystone XL pipeline, an ecologically-damaging project that would send diluted bitumen – a tar-like substance – to American oil refineries, and the congressman has repeatedly castigated the president for delaying its permit. If that wasn’t bad enough, the congressman actually owns investments in some of these companies. Congress is exempt from various trade-laws and last year 60 Minutes highlighted Boehner’s record of insider-trading.

More recently, Congress passed a bill referred to as the “Stop the War on Coal Act.” Congressman Johnson, also a Republican from Ohio, authored the bill and explained the bill wasn’t about climate change as much as it was about public health and safety. But dissenters of the bill argue it actually endangers millions of Americans and virtually declares war on public health. Furthermore, the bill could possibly pave way for a similar bill that would further secure the stature of the petroleum industry.

Big Oil should be considered a big country

Seven of the top ten highest-grossing corporations in the world, as ranked by Fortune magazine earlier this year, are of the oil industry. Royal Dutch Shell, the list’s top revenue-generator, is on par with the gross domestic product of Iran. But if it was its own country, it would be the twenty-fifth highest-grossing country in the world.

When considering these seven corporations together, they are the sixth highest-grossing entity worldwide – government or corporate. And because these entities are private corporations, and considered persons by the Supreme Court, they are not subject to the same level of public scrutiny or congressional oversight. While it may not be surprising that over three-quarters of all petroleum refined in the United States produces gasoline, diesel, and jet fuels, it may be news to some just who is consuming these fuels the most.

The petrodollar war, not the terror war

Purchasing over one percent of the world’s refined oil – by far more than any other single entity – is the U.S. Department of Defense. Over half of this consumption is used to fuel jet engines with the Air Force being the branch of greatest oil demand. The department consumes nearly double the amount of fuel annually as the Republic of Ireland and, during the height of battle in Iraq just a half-decade ago, American troops were consuming well over one million gallons of fuel daily making them the highest oil-consuming soldiers in world history. This past year, the military handed taxpayers a $20 billion energy bill which roughly equates to the cost of an automobile tank for every man, woman, and child in the country.

Less than a month after 9/11 several news outlets were reminding readers that oil was actually more of an issue than terrorism. L.A. Weekly pushed the envelope of sensitivity by offering “it’s the oil, stupid” just eight days after terrorists allegedly hijacked four airplanes. These claims are based on the fact that Big Oil has been vying for an Afghan pipeline for decades.

During the Bush-Cheney era, both of whom are previous oil executives themselves, Big Oil lobbied the federal government over $393 million, with nearly a million dollars diverted to Senator Obama during his 2008 campaign for the White House. But as the majority of Americans of all political backgrounds continue to favor renewable energy options, this Congress continues to turn a blind eye and instead demonizes governments – such as those of Iran and Venezuela – that refuse to trade crude oil in U.S. Dollars. “Petrodollar warfare” is the true reason why the U.S. invaded Iraq in 1990, and again in 2003, and is why Iran continues to remain in the military’s crosshairs.

Meanwhile, the corporate media establishment has yet to connect the dots of history for the general public or sound the alarm on the true cause of this grim outlook. In fact, many of these outlets outright support the industry as reported in a Media Matters study earlier this year regarding the coverage of the Keystone XL pipeline. The report showed that while only a quarter of Keystone XL coverage featured the massive demonstrations of people speaking out against the project, the media continued to parrot industry job estimates even though these predictions had already been widely discredited.

Starting in 1980, the FCC began deregulating the media industry which resulted in over 90% of media outlets being owned by just six corporate entities. Already this year over $153 million oil industry dollars have been spent in the corporate media establishment – mere pocket change for this influential group of executives. The result is a misguided society concerned more by the threat of terror than the more realistic threat of economic collapse.

Embedded below is an episode of FTM Daily, a radio program hosted by economist Jerry Robinson, which further explores the extent of the petrodollar system, its influence on the value of the U.S. dollar, and reveals who the major players are.

Oskar Mosco is the managing editor for Media Roots.

Earlier this year on FTM Daily, Jerry Robinson features an examination of the

Petrodollar system that is what the now-volatile U.S. Dollar is based on.