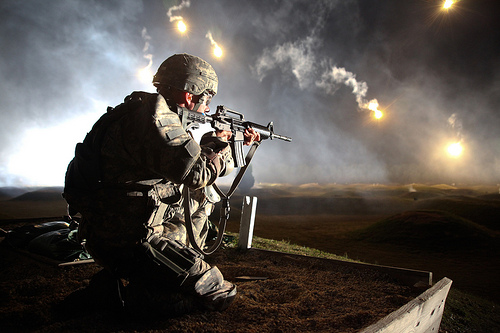 “It was a huge air assault: Approximately 100 US and British planes flew from Kuwait into Iraqi airspace. At least seven types of aircraft were part of this massive operation, including US F-15 Strike Eagles and Royal Air Force Tornado ground-attack planes. They dropped precision-guided munitions on Saddam Hussein’s major western air-defense facility, clearing the path for Special Forces helicopters that lay in wait in Jordan. Earlier attacks had been carried out against Iraqi command and control centers, radar detection systems, Revolutionary Guard units, communication centers and mobile air-defense systems. The Pentagon’s goal was clear: Destroy Iraq’s ability to resist. This was war.

“But there was a catch: The war hadn’t started yet, at least not officially. This was September 2002–a month before Congress had voted to give President Bush the authority he used to invade Iraq, two months before the United Nations brought the matter to a vote and more than six months before “shock and awe” officially began.”

AMY GOODMAN: Here to talk about this all with us is Jeremy Scahill, producer and correspondent for Democracy Now!, has an article at The Nation magazine’s website, called “The Other Bomb Drops: How Bush Began the Iraq Invasion Before He Went to Congress or the U.N.” We are also joined on the telephone by Hans Von Sponeck, former Assistant Secretary General of the United Nations. And we are joined by John Bonifaz, who has just begun a website that deals with this issue. He is author of Warrior King: The Case for Impeaching George W. Bush. The website is called, AfterDowningStreet.org, a coalition of various groups urging Congress to begin a formal investigation to whether Bush has committed impeachable offenses in connection with the invasion of Iraq. Let’s begin, Jeremy, with you. Welcome to Democracy Now!, on this side of the mic.

JEREMY SCAHILL: Thank you, Amy. It’s good to be here.

AMY GOODMAN: Talk about what you found.

JEREMY SCAHILL: I think for many people who have been following the politics of the invasion and occupation of Iraq, it comes as no surprise to learn that the Bush administration intentionally misled the U.S. public and the world and operated with tremendous bad faith when it said it was trying to do everything it could to avoid war. And what we have here is really solid documentation that backs that up. What the British Times of London published last weekend was statistics from the British defense ministry that showed that in the second half of 2002—let’s remember that the invasion of Iraq officially began in March of 2003—that from May 2002 until the end of 2002, that the United States and Britain doubled the amount of attacks that—the number of attacks that they were carrying out against Iraq, from the whole of 2001. So, what you saw was the Bush administration ordering attacks, offensive attacks on Iraq, that were intended to take out communications infrastructure in the country, the ability of commanders in the Iraqi military to communicate with one another, pretty much defensive mechanics for the country, and these attacks were happening with the justification that they were protecting the so-called no-fly zones in Iraq.

The real scandal here is that the Bush administration, like the Clinton administration before it, oversaw the longest sustained bombing campaign since Vietnam. We reported on this show for years consistently that the United States was bombing Iraq once every three days. This bombing began—you could say that the preparations for this invasion began the moment that the so-called Gulf War ended and that Clinton laid the groundwork for this in his regular bombings of Iraq. We saw a spike in activity in these so-called no-fly zone attacks which had no U.N. mandate whatsoever, which were not approved by the international community.

What we saw that sort of changed here under Bush is that the Bush administration dropped all of the rhetoric about the no-fly zones having something to do with defending Shiites or Kurds and actually were quite public about what they were using these no-fly zones for. They were using them to systematically and preemptively degrade Iraq’s ability to defend itself, not from an uprising of Shiites or Kurds, but from the invasion of a foreign army.

JEREMY SCAHILL: Yes. It reports on a meeting that senior British officials had had with members of the Bush administration, and what it is is a reflection of what the British understood to be the United States’ policy at the moment. And what’s clear from reading this—it’s actually not a memo, it’s minutes, but it’s called the Downing Street memo. It’s minutes of this meeting with Tony Blair and some of his most senior defense advisers. And the picture that is painted from this memo is that the United States already was not just planning and preparing for war, but was actively carrying out air strikes in support of this war. The invasion had begun already when the British had this meeting. And we find that in the form of remarks attributed to Geoff Hoon within these minutes, where he is talking about the Americans already spiking up activity against Saddam Hussein, and what he’s referring to is the increasing use of these so-called no-fly zones to degrade Iraq’s ability to defend against a U.S. invasion and to prepare the route for U.S. Special Forces to enter into the country. In September of 2002—now this is months before the actual invasion officially began, and a few months before Bush went to the Congress or the United Nations—100 aircraft violate Iraqi airspace, British and American aircraft. They go in and they carry out a systematic campaign of air strikes in the west of Iraq and basically destroy the west of Iraq’s ability to defend against an invasion. And that was one of the main places where U.S. Special Forces troops came in from Jordan into the west of Iraq. That happened in September of 2002. We’re talking about months before the actual invasion began.

AMY GOODMAN: We are talking to Democracy Now! correspondent, Jeremy Scahill, has a piece in The Nation online called “The Other Bomb Drops.” When we come back, we’ll also be joined by attorney John Bonifaz and the former U.N. Assistant Secretary General, Hans Von Sponeck..