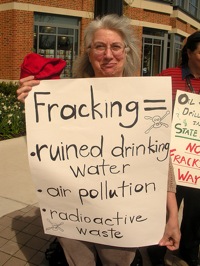 YES!– When politicians refer to natural gas as a “clean” alternative to oil and coal, they seldom mention a commonly used technique called horizontal hydraulic fracturing, also known as fracking.

But in New York, residents were concerned enough about the long-term environmental, health, and economic fallout of fracking that they convinced the state Senate to institute a moratorium on the practice. In a 48-9 bipartisan landslide, state leaders voted to prohibit fracking for nine months so they can evaluate the environmental and health impacts of the practice before deciding how to continue.

“It was absolutely the result of thousands of citizens weighing in with their senators,” said Katherine Nadeau, director of the Water and Natural Resources Program for Environmental Advocates of New York. “When that many people call, write, and show up, it gets results. The other side was spending obscene amounts of money, but the more compelling argument was that there have been serious tragic repercussions to drilling.”

Those repercussions have included fatalities from exploding wells, 30-mile stretches of streams without any living organisms, exploding tap water, diesel fuel spills, sick children and adults, plummeting property values, farmland that is no longer tillable, the destruction of vast swaths of once-beautiful scenery, along with many other documented cases of harm to people and the planet.

Continue reading about Winning the Fight Against Fracking.