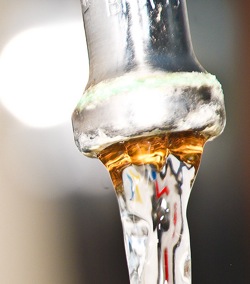 MEDIA ROOTS- When was the last time you stopped to think about the one thing you can’t live without? I don’t mean the Internet – I’m talking about water. Without clean drinking water, life could not go on. This is why it’s so important that we know what is in our water. For the past sixty-five years, city governments nationwide have been adding a controversial substance called fluoride to municipal water supplies.

You probably recognize the word fluoride  from the back of your toothpaste tube or from your visits to the dentist. But the fluoride added to our water is not the same as that in our toothpaste. The chemical added to our water is a fluorine compound called hexafluorosilicic acid that is generated as a by-product from the phosphate fertilizer industry.

Phosphates are minerals that are used to make fertilizer, and phosphate mining industry is a giant moneymaker. Fluoride is created by the production of fertilizer as well as in the manufacturing of steel, aluminum, glass, and cement. Previously, the lack of government regulation allowed gaseous fluoride to move through factory smokestacks and straight into our atmosphere. Now, environmental regulations require giant filtration systems called “scrubbers” atop the stacks to keep these toxic chemicals from escaping into the air. Fluorosilicic acid is then extracted from these scrubbers and condensed to a water-based solution which is packaged unrefined and sold to city governments for the purpose of water fluoridation.

By selling the fluoride byproducts for this purpose, companies avoid  the huge cost of disposing of these chemicals in the environment safely, and according to regulation. Back in the 1930’s, a band of industrial corporations – including Monsanto, U.S. Steel, Union Carbide, and Aluminum Company of America (ALCOA),  the leading producer of aluminum – had been cheaply disposing of their fluoride byproducts into the environment for years. This changed when their toxic waste became the target of negative press in the local news. A 1933 toxicology report by the USDA had warned of fluoride’s toxicity, singling out the aluminum industry as the biggest culprit.

The new potential of legal liability due to the exposure of workers and communities to industrial fluoride scared these corporations. Knowing that disposing of industrial fluoride waste safely was expensive, ALCOA employed biochemist Gerald Cox in 1936, to argue for fluoride’s dental benefits through experimentation on rats. Cox, neither a doctor nor a dentist, concluded that fluoride strengthened and protected teeth against decay and began to tour the country promoting water fluoridation on behalf of his employers. Interestingly, Cox’s findings ran contrary to the position originally held by the American Dental Association (ADA) on water fluoridation.

In 1944, the Journal of the American Dental Association published the following statement:

“We do know that the use of drinking water containing as little as 1.2 to 3.0 parts per million of fluoride will cause such developmental disturbances as osteosclerosis, spondylosis, and osteopetrosis, and we cannot afford to run the risk of producing such serious systemic disturbances…”

In spite of this warning by the ADA, Grand Rapids, Michigan became the first community to fluoridate its drinking water the very next year.

In 1947 Oscar R. Ewing, a paid attorney for ALCOA, was picked to head the Federal Security Agency.  In this position he oversaw the Public Health Service or PHS (which is now the Department of Health and Human Services). This enabled him to change the Code of Federal Regulations, and place all control of drinking water fluoridation in the hands of his own department. Making clear his lingering ties to the aluminum industry and their expensive toxic waste, Ewing made fluoridation promotion one of the first official policies of the PHS. Over the next three years, 87 additional American cities began fluoridating their water.

The study that is often referred to in fluoride’s defense was conducted by the National Institute of Dental Research (NIDR) of the United States Public Health Service (PHS). It sought to determine whether there was a relationship between fluoridation and tooth decay. Released in 1988, the multi-million dollar nationwide survey examined 39,000 U.S. school children aged 5-17 from 84 different fluoridated and non-fluoridated geographical areas.

Fluoride overexposure can bring serious health risks. The most common affliction due to overconsumption is called fluorosis, a condition characterized by a discoloration of teeth or changes in bone density. An excess of fluoride eats away at the enamel of your teeth, causing craters and surface discoloration. Dental fluorosis is the first clear and obvious sign that your body is being poisoned by too much fluoride, and cases can range from mild to severe. This occurs because only 50% of all fluoride taken in by the body is excreted. The remaining fluoride is disseminated throughout the body, accumulating in our bones, pineal gland and other tissues. In Karnataka, India, an excess of fluoride has turned the ground water into a slow poison, crippling at least 10,000 people.

The Director of the National Institute of Mental Health and Neurosciences, Dr D Nagaraj, says that “due to fluoride concentration in water, many people in districts [in Karnataka, India] like Dharwad and Tumkur have spinal cord diseases. These are progressive diseases, after decades of consumption. People are battling with permanent disabilities.”

Alarmingly, a 1991 study by the U.S. Public Health Service found that the rates of osteosarcoma, a deadly type of bone cancer, were significantly higher in fluoridated communities than in non-fluoridated communities. The Harvard School of Dental Medicine found the same link in study done ten years later. Additional studies have associated fluoride ingestion with other serious health problems, including chromosomal damage, morphological changes to their kidneys and brain, hypo activity (or inactivity), damage to the thyroid gland, skeletal fluorosis, osteoporosis, liver cancer, and fertility problems.

The most distressing findings come from 18 human studies done in China, India, Iran and Mexico that show a substantial lowering of IQ in fluoridated areas. The ingestion of fluoride has been shown to increase the gastrointestinal absorption of aluminum by over 600%, and the absorption of heavy metals like aluminum is speculated to have a direct correlation to Alzheimer’s disease and other neurological brain disorders. Although a direct correlation between Alzheimer’s disease and fluoride ingestion is inconclusive, it is interesting to note that the rate of Alzheimer’s is twice as high in America than in Europe, where many countries have banned fluoridation.

Many countries around the world are skeptical of the benefits of adding fluoride to drinking water. Austria, Belgium, Denmark, Finland, France, Germany, Iceland, Italy, Luxembourg, Netherlands, Norway, Sweden, Switzerland, Japan and China have all ruled out water fluoridation as a safe and fair practice.

If you want to find out whether you’re drinking fluoridated water, the first thing you can do is access your city’s fluoridation status on the Center for Disease Control’s website in its oral health section.

If your water is fluoridated, it’s not a lost cause.  You can speak out in your community or at city council meetings to let your local representatives know your concerns.  To remove fluoride from your water you have a couple of options. You can equip your home with water filtration systems like those at Equinox or Burkey. Filters like Pur and Brita do not remove fluoride.  If you buy bottled drinking water, reverse osmosis and distillation remove almost all fluoride.

If your city is planning to fluoridate you can stop it! Activists in Pennsylvania have successfully fought off fluoridation legislation since 1987 and they’re at it again. There is still a chance to put a halt to the fluoridation process in your own city.

Whether or not you support water fluoridation, the real issue here is having a choice. No chemical, no matter what its supposed benefits are, should be forced upon the public without their consent.  Having access to clean water should be a fundamental right for every human being.

“Water is the lifeblood of our bodies, our economy, our nation and our well-being.” -Stephen Johnson

After numerous attempts to get data from city officials proving the benefits of mass fluoridation, I kept getting referred back to either the respective city’s water website or other government controlled sites. I also attempted to get in contact with Ellie Nadler, the head of San Diego’s Coalition for Fluoridation, but couldn’t find any legitimate website or group presence for that matter. Ellie backed out of any interviews and refused to give a statement.

Interview I conducted with David C. Kennedy, DDS, and former head of the International Academy of Oral Medicine and Toxicology.