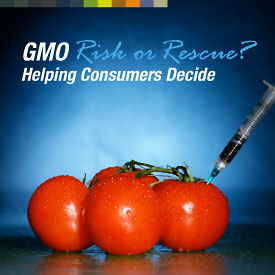 With the USDA’s recent flurry of green lights for genetically modified crops — evidently at the urging of the White House  — the Obama administration should brace itself for a big push on the labeling question. Popular sentiment may be swelling for something the agrichemical/biotech industry really doesn’t want: labels on food products proclaiming the presence of GM material. The New York Times’ Mark Bittman is a widely read and influential writer. His latest column puts the case for labeling in terms that the administration will have trouble refuting:

“Even more than questionable approvals, it’s the unwillingness to label these products as such — even the G.E. salmon will be sold without distinction — that is demeaning and undemocratic, and the real reason is clear: producers and producer-friendly agencies correctly suspect that consumers will steer clear of G.E. products if they can identify them. Which may make them unprofitable. Where is the free market when we need it?”

He who controls the research …

At the L.A. Times, the Union of Concerned Scientists’ wonderful Doug Gurian-Sherman has a must-read op-ed for anyone who thinks people are hysterical to oppose GMOs (or want them labelled). Writes Gurian-Sherman about the alleged benefits of GMOs:

“We don’t have the complete picture. That’s no accident. Multibillion-dollar agricultural corporations, including Monsanto and Syngenta, have restricted independent research on their genetically engineered crops. They have often refused to provide independent scientists with seeds, or they’ve set restrictive conditions that severely limit research options.”

Those facts should be pondered whenever you hear anyone mouth the platitude that GMOs “have been proven safe” or “never hurt anyone” or deliver X, Y, or Z benefits. Empowered by a generous intellectual-property regime, the seed giants dictate who does what research and how. As Gurian-Sherman reports, the industry and the EPA were embarrassed in 2009 when 26 university entomologists wrote a letter to the agency complaining of lack of access to seeds. “No truly independent research can be legally conducted on many critical questions involving these crops,” they wrote. Monsanto and other companies have been shamed into reaching agreements to allow access to seeds to USDA and unversity researchers — but the deals are voluntary, opaque, and still quite limited. As Gurian-Sherman writes: “The Monsanto agreement with the USDA covers research into crop production practices, for example, not research into issues such as the health risks of genetically engineered crops.”

A defense of GMO alfalfa gets mowed down

James McWilliams is a vegan, so he deplores the planting of alfalfa, which is mainly used as cow feed. But if it must be planted, he argues on the Atlantic website, it might as well be from Monsanto-patented seed genetically engineered to withstand Roundup, Monsanto’s flagship herbicide. The USDA itself [PDF] and mainstream ag scientists are on record warning that Monsanto’s alfalfa will cross-pollinate with organic and non-engineered alfalfa. The USDA chose to “deregulate” it anyway, enraging the organic community. In his Atlantic piece, McWilliams set out to defend that decision by debunking the contamination fears. A few days later, Organic Inc. author Sam Fromartz completely obliterated McWilliams’ argument, documenting several past cases of GMO contamination.

Bryan Walsh makes a rousing case for the food movement as savior of environmentalism, which, he argues, has “stalled.” There’s a lot to what Walsh is saying here, but I think there’s something different going on than what he describes. I don’t think environmentalism has stalled; I think efforts to make big policy changes have stalled. Climate legislation failed ignominiously last year, and not before being hopelessly compromised and stepped on by industry interests. And that was with Democrats in charge of the White House and both legislative chambers. Meanwhile, global climate talks are in limbo. What now? No one has figured out a way to crack that nut.

What the food movement offers is a hands-on way to create a world that makes sense in your immediate community. It is environmentalism brought into the kitchen, the yard, the neighborhood, the city farmers’ market, the soil in the surrounding countryside. You can get your hands on food, taste it, make friends around it. The change you see is immediate. And just as the environmental movement spawned the environmental-justice movement — based on the idea that certain groups were more focused on whales than on toxic poisoning in low-income communities — a food-justice movement has sprung up. Indeed, much of today’s food movement sprouted in low-income urban areas in the early ’90s.

But on the grand policy level — Michelle Obama’s garden and kids initiative aside — the food movement is getting squashed, too, as Food and Water Watch’s Wenonah Hauter recently argued in a pungent essay. The lesson: Changing policy is hard, long, grinding work, often abstract and rife with defeats. To keep going, it helps to have on-the-ground successes, and that — often enough — is what community food work provides. (Not that there aren’t setbacks, squabbles, and frustrations built into it.) All that said, I agree with Walsh that the food and environmental movements are now intertwined and will thrive or languish together.