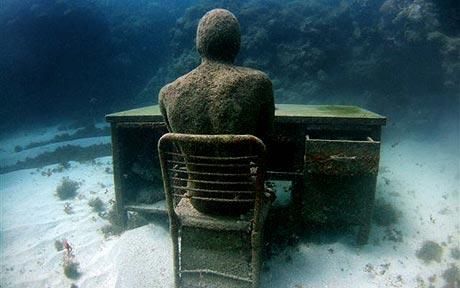 MEDIA ROOTS- It appears the sea has become an appropriate site for modern art, as Mexican artist Jason De Caires has inserted his sculptures into the ocean. The pieces are created on land, transported by boat and submerged into shallow water that can be viewed by snorkeling. Some of the larger figures are actually bolted to the floor of the ocean.

As an activist, I don’t know how I feel about this endeavor. The ocean floor is the last environmental bastion of non-human interference. I think the most beautiful thing about snorkeling or scuba diving is being immersed in a completely unadulterated environment.

On the other hand, I do appreciate the fact that the sculptural pieces are made of material that doesn’t destroy the ocean habitat in any way. The pieces are strengthened by the coral, algae, and marine life that grow on them. Under most circumstances, nature will destroy anything manmade over time, which is encouraging to think that this art will eventually be overtaken by coral and algae and serve as a foundation for new life.

As an artist, it irks me that this guy is gaining such notoriety for this. His sculptures are very generic and uninteresting. A bowl of fruit on a table? A guy sitting at a desk? Bolted to the bottom of the ocean floor?  The one that is the most unsettling to me is the guy at a desk. Do we really need this portrayal of present day working humans in an atmosphere that is totally unrelated to our modern world?

Anyone who tries to escape the human world will be forced to view his art. Instead of choosing to view his exhibit in a gallery of sorts, you are forced to be faced with it if you happen to be underwater in this part of the world. The only thing I know is that it would be the last thing I want to see underwater… hopefully this type of aquatic foray doesn’t spread to the rest of the art world.