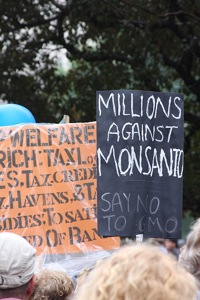 THIRD WORLD NETWORK INFORMATION SERVICE ON BIOSAFETY– Below is a list of different initiatives in countries worldwide to restrict or regulate the import, distribution, sale, utilization, field trials, or commercial planting of genetically modified organisms (GMOs). Information for this list was compiled from various sources. This list is by no means exhaustive, as there are certainly other initiatives of which we are not yet aware.

Special note should be made of the bans implemented by Algeria, Sri Lanka, Thailand, and China. Since December 2000, Algeria has banned the import, distribution, commercialization and utilization of GE plant material. Sri Lanka has banned the import of all GE foods from May 2001. In April 2001, Thailand banned all GE crops trials, and continues to ban all commercial planting of GE crops. Also in April, the Chinese government banned the commercial planting of GE rice, wheat, corn and soybean.

We hope this list provides a sense of the various actions being taken by governments, local authorities, and communities worldwide to protect their health and environment from the potential hazards of GMOs. Proper restriction and regulation of GMOs, by keeping the country GE free or by implementing and enforcing bans or moratoria on GMOs, is the only way a country can effectively exercise the precautionary principle.

Algeria: Ban on the import, distribution, commercialization and utilization
of GE plant material, except for research purposes.

The draft Organization of African Unity (OAU) model biosafety law requires that all GMOs, whether classified as food, crops, pharmaceuticals, or commodities, and products thereof must be approved before import, transit, contained use, release, and market release can take place. Any GMOs or products thereof must be labeled as such and there is a strict liability regime in place. This model law will serve as a model for national implementation in African countries.

Sri Lanka: A ban on the import of all genetically modified foods, raw and processed, went into effect on May 1, 2001. This includes GMOs and products thereof.

Japan: Declared not to import GE wheat. Recent legislation has set zero tolerance for imports containing unapproved GE products. Imports found to contain unapproved GMOs will be destroyed or shipped back to origin. Violators may incur penalties of up to one-year imprisonment and may be fined. The legislation also seeks mandatory labeling for GMOs in food.

The European Union is expected to approve very strict legislation on labeling and traceability; products thereof will have to be labeled even if traces of GE material cannot be found in them.

Austria: Bans on three varieties of GE maize – Novartis, Monsanto and AgrEvo. The Federal Institute for Less-favored and Mountainous Areas is pressing for GE-free legislation and published a study on GE free zones, initiatives in the States of Vorarlberg and Salzburg to ban GE trials.

United Kingdom: The Church of England has refused permission for GE crop trials on 60,000 hectares of its land, dozens of local authorities supply GE free school lunches, while the House of Commons has banned GE food for its catering. The Island of Jersey has banned GE crops.

Spain: The Basque government has imposed a five-year blanket moratorium for GMOs. The provinces of Castilla-La Mancha and Baleares have banned GE food, while Andaluc’a declared a five-year moratorium on GE crops trials and food.

Brazil: Ban on the planting of GE seeds. The states of Rio Grande do Sul and Mato Grasso do Sul have declared their intentions to remain GE-free. 18 states have called upon the central government to block commercial GE crop planting.

Paraguay: The Ministry of Agriculture plans to ban the commercial planting of GE crops.

Saudi Arabia: Ban on GE food and declared not to import GE wheat.

United States of America: Maryland has banned GE fish. There are various bills calling for moratoria on GE food (Vermont), and bans on GE wheat (North Dakota and Montana) have been filed within the last year. Several municipalities have declared moratoria on GE food (Burlington, Vermont), bans of GE crops (City of Boulder, Colorado), or urged the federal government to ban GE food (City and County of San Fransisco, California).

Australia: Ban GE rapeseed as weed in Tasmania, and a ban on commercial planting of GE crops in Western Australia. Australian States have been given the right to declare themselves GE free. Some communities (e.g. Bondi/Sydney, West Wimmera Shire) have declared themselves GE free.

New Zealand: Trials of GE salmon have been blocked by the government. Some local bodies in Auckland and Wellington have declared themselves GE free.