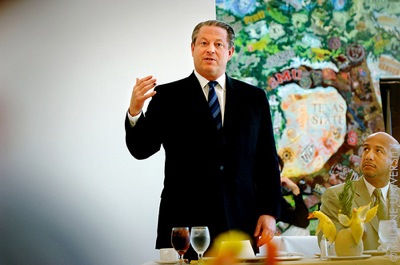 FOX NEWS– The founder of the Weather Channel wants to sue Al Gore for fraud, hoping a legal debate will settle the global-warming debate once and for all.

John Coleman, who founded the cable network in 1982, suggests suing for fraud proponents of global warming, including Al Gore, and companies that sell carbon credits.

“Is he committing financial fraud? That is the question,” Coleman said.

“Since we can’t get a debate, I thought perhaps if we had a legal challenge and went into a court of law, where it was our scientists and their scientists, and all the legal proceedings with the discovery and all their documents from both sides and scientific testimony from both sides, we could finally get a good solid debate on the issue,” Coleman said. “I’m confident that the advocates of ‘no significant effect from carbon dioxide‘ would win the case.”

Coleman says his side of the global-warming debate is being buried in mainstream media circles.

“As you look at the atmosphere over the last 25 years, there’s been perhaps a degree of warming, perhaps probably a whole lot less than that, and the last year has been so cold that that’s been erased,” he said.