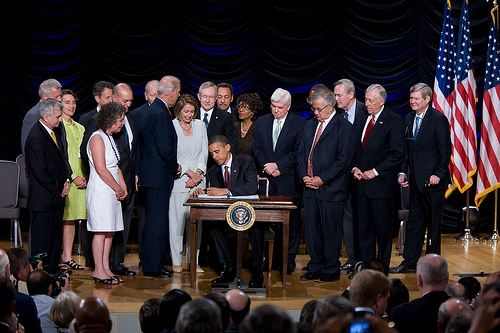 SEATTLE TIMES– As revealed by President Obama’s choices for his Cabinet, Washington is the same one-party town it always has been — controlled not by Democrats or Republicans, but by Kleptocrats (i.e., thieves). Their ties to money make them the undead zombies in the slash-and-burn horror flick that is American politics.

Only weeks ago, the political world was buzzing about a “team of rivals.” America was told that finally, after years of yes-men running the government, we were getting a president who would follow Abraham Lincoln’s lead, fill his administration with varying viewpoints, and glean empirically sound policy from the clash of ideas. Little did we know that “team of rivals” was what George Orwell calls “newspeak”: an empty slogan “claiming that black is white, in contradiction of the plain facts.”

Obama’s national-security team, for instance, includes not a single Iraq war opponent. The president has not only retained George W. Bush’s defense secretary, Robert Gates, but also 150 other Bush Pentagon appointees. The only “rivalry” is between those who back increasing the already bloated defense budget by an absurd amount and those who aim to boost it by a ludicrous amount.

Of course, that lock-step uniformity pales in comparison to the White House’s economic team — a squad of corporate lackeys disguised as public servants.

David Sirota is a fellow at the Campaign for America‘s Future. Find his blog at OpenLeft.com or e-mail him at [email protected]