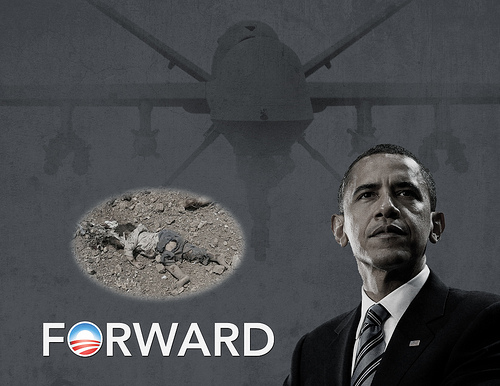 MEDIA ROOTS – While it may be popular to blame George W. Bush for the terror war, it is actually President Obama who has escalated drone warfare from 45 strikes when he assumed office to an additional 292 strikes as of last month. This is in large part due to the relaxed standards this president has set with strikes occurring not just for specific (alleged) combatants but now include targets that merely appear to fit certain criteria.

To date, the office of the president has now approved of more slaughter from drones than the total number of victims on 9/11. The fear that once settled in America’s hearts following the attacks on the World Trade Center and the Pentagon – attacks that were supposedly executed by manned aerial vehicles – hardly compare to the terror that Pakistanis now suffer from the unmanned drones. And while America is not officially at war with Pakistan, 74% of Pakistanis now consider the United States an enemy, according to a report released last week titled Living Under Drones. But why is this genocide continuing with virtually no outcry from the American citizenry?

No compassion, no coverage

The latest drone strike occurred just yesterday in Yemen. Military officials claim that four al-Qaeda militants were killed in the strike but there is simply no way to verify if this information is accurate. Virtually no American news agency covered the event and even fewer media outlets questioned authorities on its legitimacy.

The separation of general society from the terror war is comparable to the president and his weekly kill list or drone operators and their targets. As the war on terror enters its twelfth year on Sunday, almost no corporate media outlet deems this historical mark worthy of reflection thus continuing to alienate Americans from the horrors that are taking place daily in their name.

The president advises drone operators that potential combatants are men of military age – between 18 and 65 – and supports targeting them for assassination from the comfort of armchairs thousands of miles away. Additionally, anyone rushing to the aid of these victims is immediately considered a suspected terrorist and is frequently targeted just seconds later. The result has been the creation of dysfunctional societies that not only fear the skies but also helping one’s neighbor.

“What is absolutely true is that my first job, my most sacred duty as president and commander-in-chief, is to keep America safe,” President Obama explained in an interview last month. But a much more dangerous precedent is now taking place. David Kilcullen, a former adviser to General Patraeus, explained that for “every one of these dead noncombatants represents an alienated family, a new desire for revenge, and more recruits for a militant movement.”

Several American antiwar activists, including some from the women’s group Code Pink, are now on the ground in Islamabad in preparation for a march to northwest Pakistan that starts tomorrow. They are marching in protest of the seemingly unending barrage of drone-strikes in the region and are led by Imran Khan, a Pakistani official known for his days as one of the nation’s top cricket players.

No end in sight

These crimes against humanity are staggering. But the general tolerance for these crimes by the American electorate is what is of particular concern. How many times must this president murder children before other parents stand up? And will voters actually re-elect such an evil administration that is only perpetuating this terror war? With President Obama and Governor Romney leading in the polls, the outcome appears inevitable.

a recent report that explains how drone warfare is terrorizing civilian populations.

2 thoughts on “Obama’s Normalization of Neo-Conservativism”