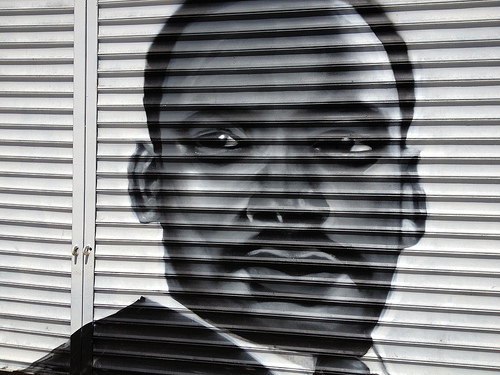 Now that the nation has celebrated MLK’s heroic agitation for civil rights, there’s another facet of Martin Luther King Jr. often ignored in the media that deserves reflection.

What do MLK, JFK and RFK share in common?

Indeed, all three of them had undeniable charisma which directly and emphatically threatened the powers that be. Each demanded a presence with their sheer character, possessing an uncanny ability to embody the words they spoke rather than simply acting as another suit-and-tie with a political platform pre-scripted by some other PR suit-and-tie.

All three had the ability to enact change at a fundamental level, because they were personally convicted and committed to dissenting against war in a world that had become hellbent on destruction and violence.

But there is a further striking similarity between these three charismatic leaders: all of them were assassinated after focusing their critiques against the war machine.

In his formative stages, MLK was a radical proponent of non-violent protest against segregation and racism. He orchestrated sit-ins and marches in order to fight on behalf of African-Americans and the deprivation of their basic civil liberties as stamped in the Constitution. Nowadays, MLK is known for his success as a civil rights champion in regards to race equality. But later down the road, he had a stark realization which radically shifted the way he thought about political dissidence. This change of heart is what I wish to underscore, in remembrance of MLK and what he was willing to stand – and die – for.

We’re all familiar with MLK’s “I Have a Dream Speech” speech that he delivered in 1963 in Washington, D.C., culminating his March on Washington protest. In the speech, MLK envisions a day when racial inequality is no more, replaced by an egalitarian, racially colorblind America. However, in April of 1967, some four years later, Martin Luther King had a different culprit in mind – American foreign policy. In a speech entitled “Beyond Vietnam: A Time to Break Silence” delivered at Manhattan’s Riverside Church, King excoriates the military industrial complex and sees it as a fundamental wrong that ought to be first and foremost on our minds. King begins by addressing himself, critiquing his own “silence” on matters of foreign policy:

“Over the past two years, as I have moved to break the betrayal of my own silences and to speak from the burnings of my own heart, as I have called for radical departures from the destruction of Vietnam, many persons have questioned me about the wisdom of my path. At the heart of their concerns this query has often loomed large and loud: “Why are you speaking about the war, Dr. King?” “Why are you joining the voices of dissent?” “Peace and civil rights don’t mix,” they say. “Aren’t you hurting the cause of your people,” they ask? And when I hear them, though I often understand the source of their concern, I am nevertheless greatly saddened, for such questions mean that the inquirers have not really known me, my commitment or my calling. Indeed, their questions suggest that they do not know the world in which they live.”

He then goes on to say, in some of the most moving words I have ever heard:

“As I have walked among the desperate, rejected and angry young men, I have told them that Molotov cocktails and rifles would not solve their problems. I have tried to offer them my deepest compassion while maintaining my conviction that social change comes most meaningfully through non-violent action. But, they asked, what about Vietnam? They asked if our own nation wasn’t using massive doses of violence to solve its problems, to bring about the changes it wanted. Their questions hit home, and I knew that I could never again raise my voice against the violence of the oppressed in the ghettos without having first spoken clearly to the greatest purveyor of violence in the world today, my own government.

For those who ask the question, “Aren’t you a Civil Rights leader?” and thereby mean to exclude me from the movement for peace, I have this further answer. In 1957 when a group of us formed the Southern Christian Leadership Conference, we chose as our motto: “To save the soul of America.” We were convinced that we could not limit our vision to certain rights for black people, but instead affirmed the conviction that America would never be free or saved from itself unless the descendants of its slaves were loosed from the shackles they still wear.

Now, it should be incandescently clear that no one who has any concern for the integrity and life of America today can ignore the present war. If America’s soul becomes totally poisoned, part of the autopsy must read “Vietnam.” It can never be saved so long as it destroys the deepest hopes of men the world over.”

We could call this MLK’s “I Have A Nightmare” speech, as King begins to realize that the systemic evils involved in racism are also found in the roots of militarism. After transitioning his critique from domestic to foreign policy, King was shortly thereafter assassinated.

Likewise, JFK lived out the beginning of his first term acquiescing to the Joint Chiefs of Staff and the CIA in their bid to prevent the dominoes from falling in favor of Communism, orchestrating coups and military operations in different regions of the world so to spread the seed of democracy and fulfill the long held tenants of Manifest Destiny. Like MLK, over time JFK eventually transitioned his aim toward the end of his first term, threatening to remove troops from Vietnam, negotiate an arms-treaty with Russia, and call for peace with Cuba, all of which would have effectively shut down the military machine. JFK was assassinated shortly thereafter.

Furthermore, RFK, who in his early years as the Attorney General to JFK was quite hawkish in regards to covert operations against Cuba, platformed his own presidential bid on fulfilling his brother’s wishes for peace, not war. RFK was also assassinated shortly thereafter.

Is it simply a coincidence that all three of these charismatic leaders were snuffed out by psychotic, nutty lone assassins whilst activating their political stance to reappropriate a republic that had been hijacked by aggressive militarism? In the case of MLK’s assassination, a Memphis, Tenn. grand jury in 1999 ruled his death not as the result of a lone nut but rather a government conspiracy, warranted by an enormous amount of evidence.

Fast forward to today, with Obama being another charismatic possessing the ability to sway an entire nation with his rhetorical skills. He too started out like JFK in critiquing the war machine, but after getting into office wholly relented to the military-industrial complex. In similar fashion to JFK’s unsanctioned war crimes, Obama’s drone policy has claimed the lives of many innocent human beings and so-called “terrorists,” strikes which are happening without Congressional oversight and thereby subject to the rubric of a war crime per international law.

Will we perhaps see a pang of conscience in Obama like we’ve seen with the aforementioned charismatics? Maybe. But let’s not forget, JFK committed his own war crimes even though he’s often heralded as an agitator of peace. Early on in his presidency, he was directly responsible for authorizing operations like Operation Mongoose, and the coup of South Vietnam’s president. Yet in the end, JFK had the spine to face up to his own atrocities and instead promote peace and democracy.

Although, it’s important to note that JFK made reform late in his first term, whereas Obama has dutifully served his corporate paymasters and war mongers all the way through his first term and so far into his second.

A considerable amount of evidence points to the simple fact that our presidents are only figureheads. They hold very little political power in any actual, substantive sense, because their financial backers and corporate lobbies are the ones ultimately calling the shots. Nevertheless, U.S. Presidents do retain the highest office in the land and thus have a media platform unlike any other individual. They are able to reach the masses immediately with a single speech.

While Obama has demonstrated himself to be an agent of illegality, we as political dissidents must not fall into the trap of demonizing him. Russian novelist and Nobel Prize winner, Aleksandr Isayevich Solzhenitsyn, once said:

“If only there were evil people somewhere insidiously committing evil deeds, and it were necessary only to separate them from the rest of us and destroy them. But the line dividing good and evil cuts through the heart of every human being. And who is willing to destroy a piece of his own heart?”

In the same vein of JFK, Obama retains the ability to choose to turn against the military machine and stand up for what is right and just and good. In similar fashion to MLK, Obama still has the chance to look deep within himself and break the betrayal of his own silence.

Will Obama use his undeniable charisma and fight back against the corporate masters that currently play him like a puppet, as did some of his predecessors? Or will he continue to live up to his placard of hope and change in name only, nothing more than a nice-looking, smiley suit-and-tie on strings?

One thing is for sure: if Obama were to cut the strings and stand up for what’s right, there could very well be a heavy price to pay.