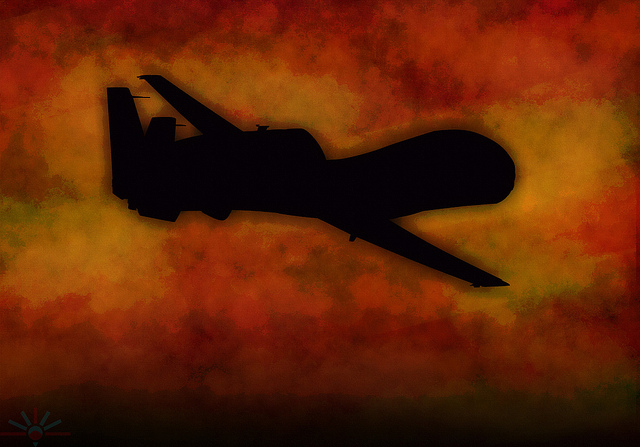 In January of 2014, a UN surveillance drone crashed in Eastern Congo.

According to the UN, the drone was part of a surveillance operation to keep tabs on warring militias that have been fighting in the country since 1996.

Ironic, considering the manufacture of drones is entirely dependent on the bloody conflict taking place on the ground below. That’s because the source of cobalt, a vital mineral in defense technologies like drones, is one of the many resources rebel groups in the Congo are fighting to control. In fact, every death by way of drone can be traced back to the embattled history of this region.

For several decades beginning in 1908, the Congo was a Belgian colony. In 1960,  a nationalist movement led by young postal clerk Patrice Lumumba was successful in gaining the country’s independence. Lumumba was then chosen as the first democratically elected Prime Minister of the Congo that year.

However his popularity, driven by a commitment to the economic and political liberation of the country, dissatisfied former colonists in Belgium and their American allies. Only months after his election, Lumumba was deposed by Western-backed forces. Within a year, he was captured by those forces and subsequently executed by firing squad on January 17, 1961.

After several years of jockeying for power, in 1965 military strongman Mobutu Sese Seko came to power in a US/Belgium backed coup. A staunch anti communist, Mobutu used much of the Congo’s resources to his personal gain, amassing a multi-billion dollar personal fortune throughout his years of cooperation with western governments and corporations.

It was during Mobutu’s rule in 1982 that the Congressional Budget Office released a report entitled “Cobalt: Policy Options for a Strategic Mineral”. In it, the CBO outlines how cobalt is an essential mineral used in American aerospace and defense technologies. Because of its necessity, the CBO declares that if cobalt supplies were to shortfall, it would be of great concern for the US government and national security.

The CBO also points out that the greatest producer of cobalt is the Congo, at the time known as Zaire. The report determines that the greatest threat to cobalt production in the Congo would be political unrest and quote “guerrilla insurrection” against Mobutu’s hardline rule.

When Mobutu was ousted in 1997, Congo fell into chaos from which it never recovered, culminating with the takeover of yet another pro-western dictator Joseph Kabila in 2001 – but the violence never stopped. Despite enjoying a cozy relationship with US leaders, it is estimated that somewhere between 5.4 to 6 million people have died under Kabila’s watch in the deadliest conflict since World War II. According to Friends of the Congo spokesperson Kambale Musavuli, the conflict can all be traced back to the “War on Terror”.

“The battle in the Congo has really been about who’s going to control Congo’s resources and for whose benefit,” he says. “Cobalt [is] a mineral very essential to modern technologies…found in aerospace, in drones, in airplanes, in nuclear reactors, and it is a strategic mineral to the so called war on terror.”

In 2011, Kabila gave approval for American Mining Company Freeport-McMoRan to expand its ownership of the Tenke Fungureme mine – the largest cobalt reserve in the world – to 56 percent, making him quite popular in Washington.

However, not everyone in the US government has turned a blind eye to the fact that minerals like cobalt come with a heavy human cost. That’s why a few members of Congress made an effort to classify some resources as “conflict minerals,” which would require companies to disclose the sources of their products.

In fact, hidden within the 2010 Dodd-Frank Wall Street Reform Bill, “Section 1502” promises to “monitor and stop commercial activities involving the natural resources of the Democratic Republic of Congo that contribute to the armed activities of armed groups and human rights violations”.

Yet cobalt was not named among the four “conflict minerals” classified in the report, despite the fact that it’s the most strategic and abundant resource in the Congo.

Perhaps that’s no surprise, considering that the VP of International Affairs at Freeport (formally VP of Africa), Melissa Sanderson, was a Political Counselor to the State Department for over two decades before joining the company. Specifically, she was the Charge d’Affairs at the US Embassy in the Congo.

With the conflict of interest so entrenched and drone strikes replacing conventional warfare, it’s hard to imagine how any top-down policy could foster real change. Ultimately, Musavuli says that rather than count on governments and corporations to put peace before profits, the solution lies in the people.

“They need the people in Pakistan [and] Afghanistan who are being bombed day and night by drones to know that those drones would be able to be sending those missiles [into their] community if the western powers did not have access to minerals in the Congo,” he says. “[Minerals] such as uranium, such as cobalt…creating those alliances with people who believe in peace and freedom and human dignity will be a change maker as we continue to support those who are fighting on the ground [in the Congo].”

Indeed, while the struggle begins with democratizing the source of cobalt in the Congo, it won’t prevail without global solidarity. Yet until people realize the interconnectedness of these conflicts, such unity may prove to be its greatest obstacle.