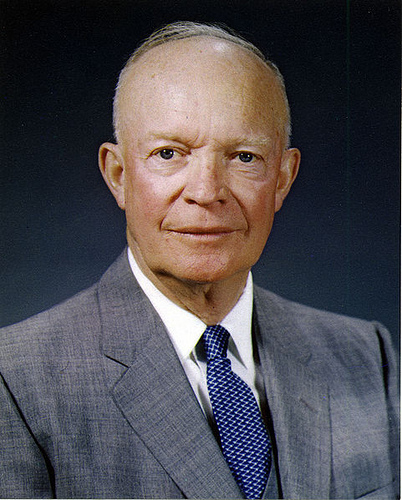 MEDIA ROOTS – The term “military-industrial complex” was originally coined by President Eisenhower in his final address as Commander-In-Chief and has since become a foreshadowing declaration to a country that may have lost its moral compass in pursuit of profits. “God help this country,” the President warned just a few weeks prior to this speech, “when someone sits in this chair who doesn’t know the military as well as I do.” Now it seems, with an annual defense budget of well over one trillion dollars, it has become a civic duty for all Americans to inform their peers of this misplaced power.

As the Supreme Commander of the Allied Forces in Europe, the coalition that defeated the Nazi regime, “Ike” was directly responsible for planning and commandeering the invasion of North Africa and France. Having honorably served in the United States Army for nearly four decades, Ike foresaw a not-so-distant future with the United States held prisoner to a tyrannous warfare industry.

“In the councils of government, we must guard against the acquisition of unwarranted influence, whether sought or unsought, by the military-industrial complex. The potential for the disastrous rise of misplaced power exists and will persist.”

Eisenhower was warning of the emergence of a developing element in society that must continuously be checked. The repercussions of failing to do so could ultimately alter the very foundations of human society. But was the career military officer just being dramatic during his last days in office?

“This conjunction of an immense military establishment and a large arms industry is new in the American experience. The total influence – economic, political, even spiritual – is felt in every city, every Statehouse, every office of the Federal government. We recognize the imperative need for this development. Yet we must not fail to comprehend its grave implications. Our toil, resources and livelihood are all involved; so is the very structure of our society.”

The future of American livelihoods were viewed to be at stake. What Ike was worried about was an America where citizens would continue to make their living from war. He was afraid that if future Americans continue to receive their paychecks directly from the military-industrial complex, then war would be here to stay.

“Disarmament, with mutual honor and confidence, is a continuing imperative. Together we must learn how to compose differences, not with arms, but with intellect and decent purpose. Because this need is so sharp and apparent I confess that I lay down my official responsibilities in this field with a definite sense of disappointment. As one who has witnessed the horror and the lingering sadness of war – as one who knows that another war could utterly destroy this civilization which has been so slowly and painfully built over thousands of years – I wish I could say tonight that a lasting peace is in sight.”

Disappointed, Ike was afraid Americans would continue to support making war a way of life – affecting the citizenry spiritually – and result in a fascist society similar to that which Hitler had created. He worried that a militaristic fascist state would evolve with an abnormally-increased militaristic culture. He feared an ongoing global war – one that could ultimately destroy humanity – would continue as defense contractors profit from weaponry creation and distribution.

When President Eisenhower addressed the nation with three days left in his presidency,

he warned of the dangerous complex that exists between military might and corporate profits.