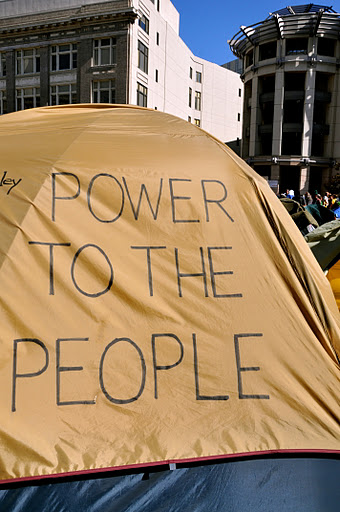 MEDIA ROOTS — In a predawn raid this morning, under direct orders from Oakland Mayor Jean Quan, riot police stormed the Occupy Oakland encampment at Oscar Grant Plaza in another coordinated multi-agency “mutual aid” operation costing the City of Oakland upwards of half a million dollars in an attempt to crush the peaceful Occupy Oakland (OO) movement once and for all.

Similar raids occurred this weekend with mass arrests against Occupy Movement encampments, including in Eureka, California; Portland, Oregon; Salt Lake City, Utah; Denver, Colorado; and Albany, New York, as well as the brutal police state beatings by riot police of student protesters attempting to establish an Occupy encampment at UC Berkeley on Wednesday to exercise their First Amendment rights at the birthplace of the Free Speech Movement.

Rioting cops beating students at UC Berkeley illegally wore no name tags to hide their identities.  Observers at Occupy Portland have also reported similar violations by riot cops.  We can thank Obama for the Federalisation/militarisation of local police.  As with the ‘mutual aid’ repression of dissent at Occupy Oakland, riot cops at Occupy Portland have consisted of Portland cops and other police agencies from neighbouring forces.

Initially, Oakland Mayor Jean Quan appeared interested in co-opting OO through photo ops with MoveOn.org, a tool of her Democrat political party.  On October 15, 2011, during a MoveOn ‘Jobs Not Cuts’ rally following a march from Laney College, widely misreported as an official OO event, adjacent to Oscar Grant Plaza, Quan refused to abide by the horizontalist ethic of OO when she refused to wait her turn to speak before the OO General Assembly.  Filmmaker Michael Moore made note of this fact during his visit of solidarity to OO, noting Quan “didn’t wanna wait in line.”  MoveOn was even asked by OO not to end their march at the plaza, which they disregarded.

After the failed attempt to attach establishment politics to OO and before conveniently skipping town to D.C., Quan gave the green light to Oakland Police Chief Jordan’s militarised storm-troopers to attack the OO encampment with chemical agents, flash-bang grenades, and ‘less-than-lethal’ projectiles.  Many were injured by the police assaults and at least one, Scott Olsen, an Iraq War veteran, was sent to the hospital in critical condition with a fractured skull after being shot in the head at point-blank range by a police projectile.  Quan attempted to navigate the backlash against the police brutality by absurdly claiming the police showed restraint and suffered abuse.

This absurd drama led up to the historic OO General Strike earlier this month.

The following night, the Oakland City Council heard from an overflow crowd of OO supporters, including 118 overwhelmingly supportive speakers, during public comment.  Public comment speakers pointed out many demonstrators attempted to intervene to stop vandals during the General Strike marches.

One speaker before the Oakland City Council, seminarian Suzi Spangenberg, countered the allegations against OO:

“If you’ve been to an Oakland Raiders game, you have seen people engaging in violent acts. You do not hold everyone at that game responsible for the acts of a few.”

Indeed, there were some 100 arrests late in the evening after the OO General Strike shut down the Port of Oakland; we’re talking less than 1% of the peaceful demonstrators.  And most of those arrested were either unrelated ‘Black Bloc’ opportunists engaging in property damage or innocent bystanders corralled by the riot police.  Aerial estimates have confirmed the participants numbered in the tens of thousands.  No, we cannot hold the 99% guilty for the crimes of the 1%.

James Vann, a longtime Oakland housing advocate and a central figure in Oakland Mayor Jean Quan’s election campaign, was one of the first to speak during the Public Forum.  He spoke with KPFA radio, which covered the entire City Council meeting live:

“Yes.  I think it was a beautiful day.  For the most part everything went beautifully, went well, went exceedingly well.  And it was only late last night, and I guess part of the march against the banks yesterday, where there’s a dissident group among the occupiers who don’t respect law and order.

“I think last night this group pretty much identified themselves, by taking over another building.  That was not part of the Occupy Oakland activity.  And so that group, I think many of those in that group, ultimately, were arrested last night.  So, the City now, the police, can identify most of those people in the dissident group.

“Yes, unfortunately there were some who broke away.  There were also members of the Occupier contingent who attempted to try to control that and put themselves between these dissidents and the rest of the march.  But they were intent on destruction.  So, this is a group that does not respect the general objectives of the Occupy Movement.”

In the wake of today’s latest raid against OO, Quan has also claimed OO had moved away from its original goals to further justify her actions.  The claim is baseless, but the Democrat Mayor was determined to smear and clear the encampment by any means.

With Wall Street-driven elections coming up on the horizon, the ruling-class cannot allow the Occupy Wall Street (OWS) Movement to continue to have the kind of impact its had upon the national body politic and its discourse, which has forced local, state, and Federal leaders to acknowledge the glaring problems with a socioeconomic system run for the benefit of the ruling-class 1% of the population controlling almost half of its wealth against the interests of the working-class, the 99%.

Instead of acknowledging the glaring timeliness of the global OWS Movement during the nation’s worst economic crisis since the Great Depression and OWS’s historic significance as a political force that isn’t going away, even in the face of police-state repression, local city governments have treated OWS encampments as public nuisances to be swept under the rug.  The nationwide crackdowns appear to be encouraged at the behest of a nation-wide Homeland Security-type repression of dissent in line with the P.A.T.R.I.O.T. Act.

In the aftermath of the brutal police state crackdowns against OO on October 25, Oakland-based community organiser with the Oscar Grant Committee Against Police Brutality and State Repression, OO supporter, Rachel Jackson spoke with Pacifica Radio’s “Flashpoints” to contextualise the militarisation of local police toward the repression of political organisation and dissent:

“I think it’s important, too, to remember that this is coming on the heels of what we saw of three years now, of this ‘mutual aid’ being enacted in response to uprisings against the murder of Oscar Grant ever since January of 2009.  We’ve seen the people of Oakland, and really a lot of the real base of Oakland and the [historic] section of Oakland, the people of colour, and low-income communities have burst out onto the scene.  And it was that mass action that forced the state and the [now-retired] District Attorney [Thomas Jensen Orloff], in particular, to bring charges against Johannes Mehserle for the murder of Oscar Grant in the first place.

“And, so there was this, you know, we’re not confused about the fact that these test-cases and these drills, operations, this sort of, this testing living laboratories of police state is happening here in Oakland, not because we’re weak, but, in fact, because we are strong.  And we know that the tear gas canisters, and the pepper spray, the flash-bang grenades, the canister and concussion grenades that has put Scott Olsen in the hospital with a fractured skull was fired by the Alameda County Sheriffs Department acting under the OPD and, of course, with, as you pointed out, with Federal oversight.

“And these particular processes of enacting this ‘mutual aid’ and the acquisition of these tools of repression, we know for a fact that these things were purchased during the past, like since January of 2009, so that the police could prepare, and the Feds and Homeland Security and the many, we had 33, some 33 or more agencies just for the [Johannes Mehserle] verdict on July 8th, 2010 and the operation sentencing on November 5th [2010].  And we’ve gotten Public Records Act requests and documentation.  They have Power Points where they showed all of the stuff that they bought, including…many of the tear gas canisters and…many of the M84 concussion grenades.”

So, the militarisation of local police has, indeed, been underway in post-9/11 U.S., ostensibly under the pretext of the ‘War on Terror.’  But it’s becoming increasingly evident the sole purpose is repression of dissent, as done in Oakland under Quan.

And although OO has denied any correlation between the tragic murder of Kayode Ola Foster in Downtown Oakland last Thursday, Mayor Quan has alleged the peaceful encampment was to blame.  Oakland has seen at least 70 murders this year and 94 in 2010.

After authorising unsuccessful brutal police crackdowns to crush OO, Mayor Quan also exploited the tragic murder of Foster as a pretext for moving to dismantle the encampment.  One of Quan’s legal advisers, Dan Siegel, resigned in protest over the clearing of the OO encampment.  Quan’s Deputy Mayor also resigned in protest a few hours later.  Whilst some protesters moved to Oakland’s Snow Park a few blocks away, at least one has begun a tree sit-in at Oscar Grant Plaza and vowed to remain there indefinitely.

OO called a protest action convergence at the Oakland Library this afternoon at 4:30pm.  At presstime, OO reported:

“The occupiers began marching shortly before 5 pm with about 1000 marchers. The march reached the plaza at 14th and Broadway with over 2000 people and immediately convened a General Assembly.  At first occupiers used the human mic, repeating each phrase in waves across the crowd but within the hour amplification was in place and as of 6:30 pm an assembly is underway.”

SF APPEAL— An early-morning police raid to break up the Occupy Oakland encampment has left Frank Ogawa Plaza devoid of protesters today–except for one lone holdout who is perched in a tree.

Zachary Running Wolf is sitting atop a small wooden platform, tied to the tree, and is being largely ignored by police for the time being.

Police Chief Howard Jordan said at a morning news conference that police are leaving him be as they look into what his legal rights are to be there.

This morning, he could be heard shouting from the tree, “This is native land. I’m not coming down.”

Running Wolf is a familiar name in the East Bay, where he has run for City Council in Berkeley and was involved in the lengthy tree-sit at the University of California at Berkeley several years ago to protest the removal of a grove of trees to make way for a new sports training center.

A protester on the ground nearby who identified himself as “Fireball” said Running Wolf represents the encampment’s “best defense” right now.

“The cops can’t get into the trees,” he said.

Meanwhile, cleanup crews were quickly clearing the remnants of the encampment from the plaza. The last tents had been taken down as of 11 a.m.

Oakland police Sgt. Christopher Bolton said those doing the cleanup are trying to salvage anything that appears to be worth more than $100, and are throwing out other objects.

City Administrator Deanna Santana said this morning that the city hopes to have the plaza reopened for public use – camping excluded – by 6 p.m.

Thirty-two people were arrested when police raided the encampment early this morning, most for illegal lodging, Bolton said.