MEDIA ROOTS– “We are awash in electronic hallucinations. The worse it gets, the more we retreat into those hallucinations. Dying cultures always sever themselves from reality, because reality becomes so difficult to face, and we’re no exception to that.” –Chris Hedges, interview with Media Roots

Of Tiger Blood and Birthers 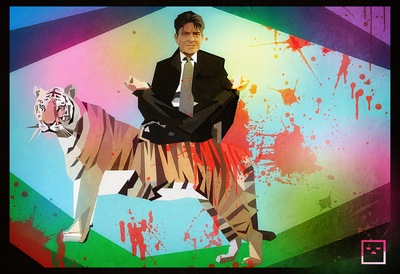 During the first four days of the corporate media’s fanatical coverage of actor Charlie Sheen’s drug-addled, tiger-blooded neurosis, four more US soldiers were killed in combat in Afghanistan. Yet, CNN only took notice after a Facebook campaign initiated by a fellow soldier went viral, which pitted the coverage of fallen soldiers against the celebrity addict. The campaign galvanized tens of thousands of people to write the following on their Facebook pages:

“Charlie Sheen is all over the news because he’s a celebrity drug addict, while Andrew Wilfahrt 31, Brian Tabada 21, Rudolph Hizon 22, Chauncy Mays 25, are soldiers who gave their lives this week with no media mention. Please honor them by posting this as your status update.”

In addition to the nonstop updates about Charlie Sheen’s “winning” streak, ABC’s 20/20 and CNN’s Piers Morgan cleared hour long time slots for Sheen to rant about his wild escapades and delusions of grandeur. Good Morning America also dedicated an entire show to broadcast live from Sheen’s Hollywood home for a revelation not to be missed: his urine drug test results.

Showbiz mogul Charlie Sheen and his gaggle of euphemisms became quintessential brand name news, virally marketed by frothing media outlets worldwide. The public platform given to his breakdown resulted in him gaining a record breaking one million twitter followers in just one day, a feat which begat another onslaught of corporate news coverage.

Less than two weeks later, the devastating earthquake and nuclear disaster in Fukushima caused a brief switch in coverage to focus on the tragedy. However, once Donald Trump, billionaire real estate mogul and reality TV star, announced his presidential run and reignited the distracting “Birther” controversy surrounding questions about President Obama’s birth certificate, the corporate media unquestioningly followed suit, propping up the non-issue to the forefront of political discourse.

There were barely any more discussions about the global implications of Fukushima’s nuclear meltdown and the importance of pursuing sustainable energy alternatives. Instead of emphasizing the dangerous fact that there are 23 nuclear reactors in the US designed almost identically to those in Fukushima, the corporate media irresponsibly focused on Trump’s crazed news “Birther” claims. Although the Fukushima crisis still loomed heavy, the media’s focus shifted again- along with the American public’s attention span.

As Charlie Sheen’s downward spiral and Trump’s “Birther” issue reigned supreme in the corporate press, the US government continued its controversial bombing campaign against Libya unabated, potentially in violation of international law (something the nation’s media should likely address instead of the latest Sheen or Trump distractions). The obsession over such superficialities dilutes rational debate on aspects of American foreign policy, like the affordability of spending $40 million a month in Libya when our country is already racked with debt, or the sheer contradiction of bombing other countries for “humanitarian” reasons.

When the popular reality television show Dancing With the Stars approached its season finale, the airwaves became saturated with the devastating news that Bristol Palin’s winning streak on the show might have been *gasp* rigged by tea party enthusiasts. This meaningless topic wasn’t just hot on Entertainment Tonight or TMZ, but was extensively covered in Time, CNN, Washington Post, NPR and a slew of other corporate media outlets, which seemed far more engrossed in such potential fraud than in the far more serious national election irregularities of the past decade. The cultural fixation on the Palin family’s crazy antics- from Sarah Palin’s misquotes of important facets of American history to Bristol’s plastic surgery and pregnancy out of wedlock- props up the notion in the mainstream that the more insane one acts, the more fame is a reward.

Thanks to the corporate media’s crazed and yo-yo “news” coverage of everything Palin, she has turned into one of the most titillating household showbiz names in the US, despite her having made a mockery of the political process in quest for celebrity. Yet, her role in the establishment is an enigma- one day she’s a politician, the next she’s starring in her very own reality TV show about her “down home” Alaskan lifestyle.  The lines are blurred by the corporate news media, and the public becomes slack-jawed and Palinized as a result by this incessant matrix of Junk Food News and Abuse.

The week prior to the earth shattering revelation that Bristol Palin might not be worthy of the Dancing with the Stars trophy, two important stories cycled through the corporate media with very little discussion about their political and societal repercussions. Robert Mueller, Director of the FBI, met with Google and Facebook to coordinate an intensified push to expand online government wiretapping. These extensions of online surveillance could effectively create a “chilling effect” among Internet users, who might suppress or monitor their speech more carefully in fear of being penalized by the government.

Another story overshadowed by Palin melodrama was that of US Army Sergeant Chuck Luther. Sgt. Luther gave heart-wrenching Congressional testimony describing his experience of being tortured at the hands of fellow US Army officials. He was confined to a small closet and deprived of sleep for a month until he signed documents that made him ineligible to receive health benefits for wounds incurred during combat. This story could have exposed a systemic problem of abuse and censorship all the way up the military chain of command if it were properly covered and investigated.

The establishment press’ version of political news exploits the personal lives of political players like Trump and Palin, instead of dissecting their stances on domestic or foreign policy. By sensationalizing inane trivialities and under reporting the real news, Junk Food News coverage grossly distorts the context and relevance of important issues in the political discourse. Whatever topics the corporate press deem worthy enough to cover at length will invariably skew the public’s perception away from the issues that should be most relevant to their lives: food, water, shelter, jobs, and education in relation to so-called defense spending- not sex scandals, drug abuse or “reality” television.

Written by Abby Martin as an intro for the chapter Junk Food News in Project Censored’s 2012 book.