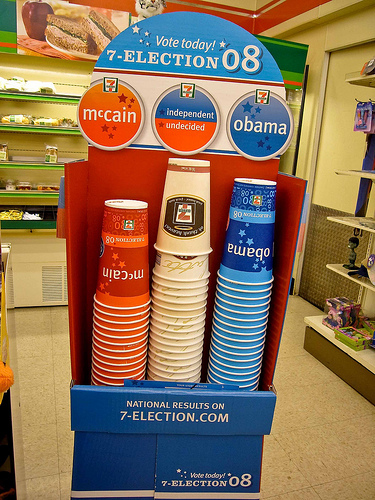 The marketing ploy has been labeled “7-Election” and offers cups featuring only the two establishment candidates running for office. However, several additional candidates continue to actively run while still not taken seriously by corporate establishments. Below are grassroots campaigns that voters might also consider to support this November despite them not having their face stamped on cups of joe.

Johnson is the sanest man running for president, according to GQ. He’s on the ballot in 47 states and believes the federal government spends too much because it does too much, such as subsidizing public energy resources and prolonging warfare.

The former mayor of Salt Lake City wishes to create a watchdog agency, instead re-enlisting Congress, to oversee the Federal Reserve while raising the federal minimum wage without first halting inflation.

Barr calls for an end to the prohibition of marijuana, rejects continued war support for Israel, and supported Sheehan’s congressional campaign in 2008. But who will run with Barr now that Sheehan has resigned from the campaign?

This team has based their campaign around their Green New Deal and wishes to create millions of green jobs. But Dr. Stein admits a vote for her would “take votes away from Obama who would be better for the 99% than Romney.”

Goode does support an audit of the Federal Reserve but believes that “legal immigration must be reduced not increased.” He rejects Obamacare and continued funding of Planned Parenthood but does support capital punishment, the utilization of nuclear power, and the expansion of domestic oil drilling opportunities.

The campaign of Dr. Ron Paul is now over with the official selection of Mitt Romney for the Republican Party’s ticket.

One thought on “Nobamney: Other Presidential Campaigns”