MEDIA ROOTS- Ralph Nader continues to be one of the most honest U.S. political analysts, despite being such an influential public citizen.

Too often, political pundits spin us with ‘horse race’ coverage that’s confined within a false left/right paradigm, and report under the assumption that U.S. voters are satisfied with the two-party system.  In recent interviews, Ralph Nader has critically analyzed controversial topics such as ‘corporate fascism’ and the ‘US two-party dictatorship’, confronting what many other public figures shy away from.

Despite low voter turnouts, tens of millions of U.S. citizens will still take to the ballot boxes in 2012.  So, we may as well speak plainly about the reality of our electoral system. As in past U.S. Presidential elections, millions of progressives will admit to holding their noses as they cast a ballot for the ‘lesser-of-two-evils’, instead of voting their consciences or demanding free and fair elections.  Yet, such topics remain taboo.

As Occupy Wall Street protesters across the country increasingly express disaffection with both corporate-driven political parties, it’s remarkable how difficult it is for our national discourse to lay bare the false left/right paradigm that is propped up by the establishment.  OWS protesters have been photographed with signs rejecting the two-party system.  Yet, amorphous anti-greed or anti-inequality complaints, rather than fundamental structural issues, such as our broken electoral system, are disproportionately featured by the mass media.  This seems as much a cognitive question of mass psychology or taboos associated with appearing partisan, as it is one of mass media complicity in the perpetuation of the two-party system.  However, younger generations see through this false dichotomy, and we can credit those same younger generations for energizing the mass political awakening we are witnessing with the OWS movement.

In an exclusive interview with Ralph Nader, Media Roots asked, “Do you think the game is rigged?”

“Well, of course,” Ralph Nader candidly admitted, ”two-party dictatorship, completely rigged, right down to the Presidential Debate Commission, which is a fancy phrase for a private corporation created in 1987 by the Republican and Democratic parties to get rid of the League of Women Voters, which supervised Presidential Debates up to then, and to exclude anyone who they think should not reach tens of millions of Americans.”

It may seem an obvious question.  But it’s very empowering to hear it asked plainly and answered so candidly by one of America’s greatest public citizens.

Without broadcasting meaningful discussions about the regressive consequences of perpetuating a restrictive two-party system, which groups like MoveOn, Global Exchange, Code Pink, and even A.N.S.W.E.R. seem to shy away from, progressives are held captive by the Democratic Party.

Ralph Nader also makes an important distinction in pointing out the Koch Brothers’ astro-turfing of the original Tea Party ideals, because it demonstrates the model by which the same may occur to the grassroots OWS movement by well-funded media darlings like MoveOn.

It’s important to not only take into consideration the hopes and aspirations of protesters on the ground, but also to follow the money back to who inevitably funds Left organizers, such as billionaire George Soros’ subsidiaries or MoveOn (which although no longer a 527, stands upon a pro-Democratic Party track record).  It may be impossible for organizers to avoid grants from funders with a vested interest in preserving the two-party system, but at least an informed citizenry can better navigate the uphill struggle toward representative democracy.  Most, including Nader, will argue it doesn’t matter from where organizing funds originate, as long as it doesn’t corrupt the message.  However, if the message emanating from mass demonstrations seems to avoid critical electoral analysis, progressive activists may be playing into pro-Democratic influences unwilling to confront such fundamental structural problems.

For example, the Keystone XL protests in D.C. earlier this year was funded in part by the Rockefeller Brothers– the No Tar Sands Oil campaign was funnelled financially through Corporate Ethics International.  This money trail may help explain why none of their spokespersons, including Bill McKibben, ever really slammed Obama or the Democratic Party beyond supplicant appeals, much less threatened withholding mass electoral support if their environmental demands went ignored.

Since well-funded groups like MoveOn (and its charismatic leaders like Van Jones) do not question the two-party system, they thereby function to perpetuate it under the pretence of grassroots transformation.  This illusion in which such groups operate only hurts real activism, progress, and change in the U.S. Even with mass protests reaching historic proportions, we still must confront the reality of a captured electoral system. 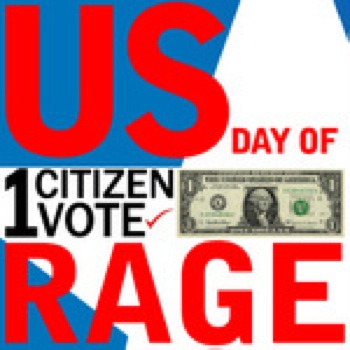 By contrast, groups like US Day of Rage, which co-organized the OWS actions from the outset, focus on electoral reform and propose an Article V Constitutional Convention outlining concrete steps, such as restoring representative democracy, abolition of corporate personhood, and the overturning of the Citizens United case.

Critical electoral analysis is not a partisan issue– it is a question of free and fair elections. The people of this country deserve to have an electoral system which truly reflects the popular will of its people, rather than one which locks them into a false choice between two increasingly identical versions of the same thing.

It’s up to honest journalists, to citizen journalists, to resident journalists, to look beyond symptoms and to causality.  It’s up to the dialectic between independent journalists and a candid Left to broadcast critical, empirically-based, electoral analysis, to cut through the false left/right paradigm, to expose uncomfortable truths, and to help raise the consciousness of the masses toward breaking out of our restrictive two-party dictatorship paradigm.