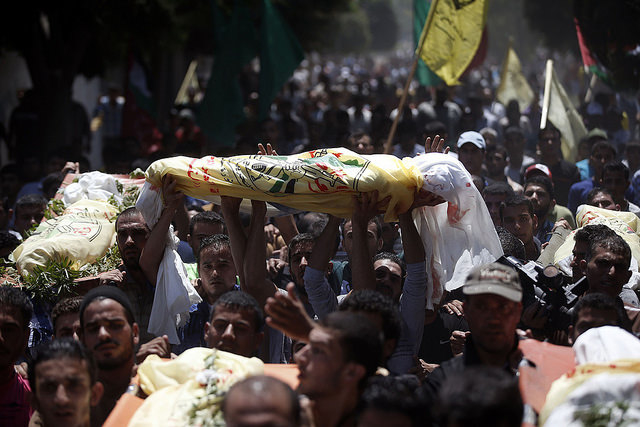 Today Israel carried out aerial strikes in Gaza targeting a mosque it claims was hosting rockets, a disabled care center and a geriatric urgent care hospital, where international volunteers have since rushed to shield patients.

In the deadliest strike yet, the city’s police headquarters and the home of Gaza’s police chief was bombed, killing 18 members of his family.

Israel has used white phosphorus on Palestinians before, and now it’s being reported by many officials that banned DIME weapons are being used against civilians in Gaza, a controversial munition that emits superheated micro-shrapnel.

According to Gaza’s Undersecretary of Health, “Medical teams have found wounds on the bodies of those killed and injured that are caused by the banned DIME weapons.” He added, “Gaza hospitals are bursting at the seams with dead and wounded. Children and women make up around 62 percent of those injured in the attacks.”

These horrors are just the latest examples of the death and destruction being wreaked amidst Israel’s five day bombing campaign dubbed ‘Operation Protective Edge’.

Since the beginning of the offensive, at least 174 Palestinians have been killed and over 1,090 injured, according to Gaza’s Health Ministry. Thousands of homes have been destroyed. A handful of Israelis have been injured but none have died from a Hamas launched rocket.

Yet despite the disproportionality of the brutality, the establishment media continues to distort the truth by painting Hamas as the sole aggressor.

From FOX‘s ‘Gaza Rockets Aimed at Israel: What Would you Do with Just 15 Seconds?’ to liberal alt-news site VOX‘s ‘The Tragedy Never Ends, Palestinian Rockets Force Israeli Peace Conference to Evacuate’ to even Human Rights Watch, a human rights organization that is supposed to be unbiased in its criticism of atrocities, which leads with ‘Indiscriminate Palestinian Rocket Attacks’.

But perhaps most disturbing is the initial headline crafted by The New York Times describing an Israeli missile bombing a cafe in Gaza packed with Palestinians watching the World Cup:

While misleading headlines framing the violence as one-sided is dangerous enough, nothing compares to the blatant misdirection displayed by ABC’s Dianne Sawyer, who portrayed Palestinians in Gaza City as Israelis.

As journalist Rania Khalek explains in an article dissecting the egregious error:

“Sawyers bald misreporting reflects either a deliberate lie by ABC news or willful ignorance so severe that Palestinian death and misery is invisible even when it’s staring ABC producers right in the face.”

The Western media routinely devalues Palestinian lives, and the dead bodies that stack up every time Israel goes on the offense remain an inconvenient truth for its narrative.

Another common misconception thanks to the media’s false depiction of Palestine is that Hamas is a rogue terrorist group, when in reality it is the democratically elected leadership of Gaza. When the IDF claims it only targets Hamas, it could mean any building affiliated with the government or social services provided to Palestinians.

“When Israelis in the occupied territories now claim that they have to defend themselves, they are defending themselves in the sense that any military occupier has to defend itself against the population they are crushing.”

According to the White House, Israeli Prime Minister Netanyahu is acting ‘responsible’ in his defense of the rockets. Yet the collective punishment of over a million people living in an open-air prison is far from such.

I made a statement addressing Israel’s ‘irresponsible’ barbarism:

Why Doesn’t the Media Care About Dead Palestinians?

Since posting this video, I have been overwhelmed at the feedback and support from thousands of Palestinians around the world. It has been featured on one of Turkey’s most popular news websites En Son Haber, Indonesian newspaper Liputan, translated in French on DailyMotion, posted on popular Arabic websites Al Arabiya, Alwatan Voice and has gone viral on Palestinian TV station Raya FM.

I strongly denounce deadly force on both sides, but it’s important to not frame this as a cycle of violence. One is the colonizer oppressor, the other the colonized oppressed. As IDF General’s son Miko Peled said, Palestinians living in occupied territories have two choices: to completely surrender, or resist – and resistance is what we’re seeing now.

Don’t miss Max Blumenthal talking about how the Israeli government hid information on the three murdered teens’ in order to incite violence, racial tension and justify a military rampage.

Why Gaza is Burning: What the Corporate Media Isn’t Telling You

IDF General’s son Miko Peled talks about the latest siege on Gaza and why Israel should decolonize Palestine if it wants to end the rockets.

Earlier this year, Secretary of State John Kerry came under fire for saying that Israel could turn into an apartheid state if reforms aren’t made. I outline five reason why it already is one.

5 Reasons Why Israel is an Apartheid State

When Israel launched its 2012 military offensive dubbed ‘Operation Pillar of Defense’, the IDF knowingly bombed a journalist tower in Gaza that housed RT among other foreign news networks. I responded to the war crime on Breaking the Set.

Many Americans think the clock starts with Hamas rockets every time Israel carries out a military operation, without realizing the roots of the conflict and history of the occupation. Here’s a brief breakdown.