COMMONDREAMS – There was a black-out and a white-out Thursday and Friday as over a hundred US veterans opposed to US wars in Afghanistan and elsewhere around the world, and their civilian supporters, chained and tied themselves to the White House fence during an early snowstorm to say enough is enough. 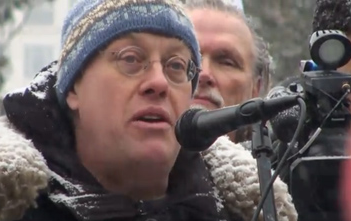 Washington Police arrested 135 of the protesters, in what is being called the largest mass detention in recent years. Among those arrested were Ray McGovern, a former CIA analyst who used to provide the president’s daily briefings, Daniel Ellsberg, who released the government’s Pentagon Papers during the Nixon administration, and Chris Hedges, former war correspondent for the New York Times.

Making the media cover-up of the protest all the more outrageous was the fact that most news media did report on Friday, the day after the protest, the results of the latest poll of American attitudes towards the Afghanistan War, an ABC/Washington Post Poll which found that 60% of Americans now feel that war has “not been worth it.” That’s a big increase from the 53% who said they opposed the war in July.

Clearly, any honest journalist and editor would see a news link between such a poll result and an anti-war protest at the White House led, for the first time in recent memory, by a veterans organization, the group Veterans for Peace, in which veterans of the nation’s wars actually put themselves on the line to be arrested to protest a current war.

Friday was also the day that most news organizations were reporting on the much touted, but also much over-rated Pentagon report on the “progress” of the American war in Afghanistan–a report that claimed there was progress, but which was immediately contradicted by a CIA report that said the opposite. Again, any honest journalist and editor would see the publication of such a report as an appropriate place to mention the unusual opposition to the war by a group of veterans right outside the president’s office.

And yet, the protest event was completely blacked out by the corporate news media, even as the capital was whited-out by a fast-moving snowstorm that brought traffic almost to a standstill.

If you wanted to know about this protest, you had to go to the internet and read the Huffington Post or to theSocialist Worker, or to this publication (okay, we’re a day late, but I was stuck in traffic yesterday), or to Democracy Now! on the alternative airways.

My old employer, the Sydney Morning Herald in Australia, showed how it’s supposed to be done. In an article published Friday about the latest ABC/Washington Post Poll, reporter Simon Mann, after explaining that opposition to the war in the US was rising, then wrote:

“The publication of the review coincided with anti-war protests held across the US, including one in Washington in which people chained themselves to the White House fence, leading to about 100 arrests.”

That’s the way journalism is supposed to work.

Relevant information that puts the days news in some kind of useful context is supposed to be provided to the reader.

Clearly, in the US the corporate media perform a different function. It’s called propaganda. And the handling of this dramatic protest by American veterans against the nation’s current war provides a dramatic illustration of how far the news industry and the journalism profession has fallen.

Dave Lindorff is a Philadelphia-based journalist and columnist. He is author of Marketplace Medicine: The Rise of the For-Profit Hospital Chains (BantamBooks, 1992), and his latest book “The Case for Impeachment” (St. Martin’s Press, 2006). All his work is available at www.thiscantbehappening.net