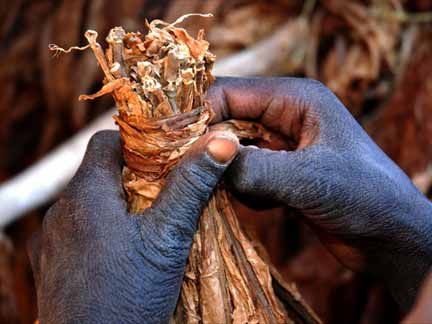 THE GUARDIAN– Children in Malawi who are forced to work as tobacco pickers are exposed to nicotine poisoning equivalent to smoking 50 cigarettes a day, an investigation has found. Child labourers as young as five are suffering severe health problems from a daily skin absorption of up to 54 milligrams of dissolved nicotine, according to the international children’s organisation Plan.

Malawian tobacco is found in the blend of almost every cigarette smoked in the west. The low-grade, high-nicotine tobacco is often used as a filler by manufacturers, reflecting a long-term global shift in production. Tobacco farms in America declined by 89% between 1954 and 2002. Three-quarters of production has migrated to developing countries, with Malawi the world’s fifth biggest producer. Seventy per cent of its export income comes from tobacco and the country is economically dependent on it.

Plan cites research showing that Malawi has the highest incidence of child labour in southern Africa, with 88.9% of five to 14-year-olds working in the agricultural sector. It is estimated that more than 78,000 children work on tobacco estates – some up to 12 hours a day, many for less than 1p an hour and without protective clothing.

Plan’s researchers invited 44 children from tobacco farms in three districts to take part in a series of workshops. They revealed a catalogue of physical, sexual and emotional abuse and spoke about the need to work to support themselves and their families and pay school fees.

The children reported common symptoms of green tobacco sickness (GTS), or nicotine poisoning, including severe headaches, abdominal pain, muscle weakness, coughing and breathlessness.”Sometimes it feels like you don’t have enough breath, you don’t have enough oxygen,” one child said. “You reach a point where you cannot breathe because of the pain in your chest. Then the blood comes when you vomit. At the end, most of this dies and then you remain with a headache.”

GTS is a common hazard of workers coming into contact with tobacco leaves and absorbing nicotine through their skin, particularly when harvesting. It is made worse by humid and wet conditions, which are prevalent in Malawi, as residual moisture on the leaves helps nicotine to be absorbed quicker. Everyday symptoms of GTS are more severe in children than adults as they have not built up a tolerance to nicotine through smoking and because of their physical size. There is a lack of research into the long-term effects of GTS in children, but experts believe that it could seriously impair their development.