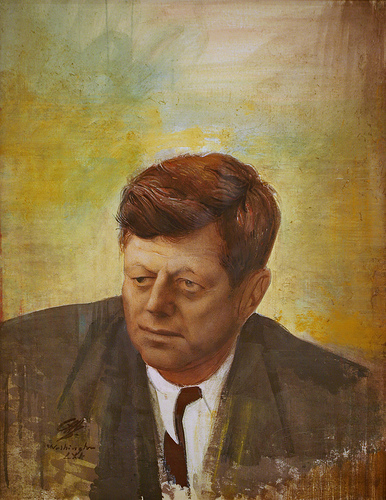 The latest eruption of John Kennedy hysteria, bordering on deification, seems safely behind us now that the 50th anniversary of his assassination has passed. Though there is much disinformation about JFK’s legacy that could and should be discussed, two areas stand out: his relationship to the Black Liberation Movement and his actions in Southeast Asia.

Despite all the evidence to the contrary, Kennedy has come to be seen as an ally of – even a hero of – the Black Liberation Movement. In fact, he opposed both the goals and actions of that movement from early in his term when terrorists were beating unarmed and vastly outnumbered Freedom Riders, to the final months of his life when four young girls were blown up in an Alabama church.

When black moderates announced plans for an action in Washington in 1963, Kennedy worked overtime to derail it, with significant success, mainly by strong arming black moderates eager to remain in good with the White House. As a result, the planned direct action protest with civil disobedience morphed into a march and the moderates went so far as to force the day’s most radical speaker, John Lewis of the Student Nonviolent Coordinating Committee, to drop portions of his speech critical of the administration.

As for Southeast Asia, many in the mainstream have argued that Kennedy was about to withdraw U.S. troops and leave the Indochinese to fight their own battles when he was assassinated. This fixation on what he might have done is understandable, for the historical record – what JFK actually did – is quite horrifying and laid the groundwork for the decade of slaughter that followed.

First was the escalation of U.S. aggression in Laos, accompanied by diplomatic shenanigans that undermined coalition governments that included the Pathet Lao revolutionaries despite their being the most popular force in the country. The goal, as always with empire, was all out victory and the annihilation of anyone who favored national liberation.

In Vietnam, a similar approach led to massive devastation. In the winter of 1961-62, Kennedy initiated the full-scale bombing of those parts of South Vietnam controlled by the National Liberation Front (all but Saigon and its immediate surroundings). The justification that bombing was needed to defeat the revolution masked the indiscriminate nature of the aerial assault, which resulted in casualties that were overwhelmingly civilian. And so the tone was set for the next eleven years of war.

It was also Kennedy who authorized the first use of Chemicals of Mass Destruction in Southeast Asia, with napalm the best-known and most deadly. Never had chemical warfare been used so extensively, though the U.S. had also used napalm in Korea in the early 1950’s. Again, the tone was established as massive amounts of phosphorous, Agent Orange and other chemicals were used for the rest of the war, chemicals the deadly affects of which are being felt to this day throughout Indochina.

And it was under Kennedy that the notorious strategic hamlets were set up throughout South Vietnam. “Strategic Hamlets” is a term worthy of Orwell at his best or Madison Avenue at its worst, designed to induce thoughts of happy, grateful peasants gathered around a campfire. The more accurate phrase would be Concentration Camps, as Vietnamese by the thousands were rounded up at gunpoint and forced to live behind barbed wire. Anyone who resisted was beaten or worse; anyone attempting to escape was shot. The aim was to separate the people from the NLF though the result, not surprisingly, as with the bombing and the chemical weapons, was the opposite, as ever larger segments of the population became supporters of the revolution.

As each of these moves failed and the NLF grew stronger, Kennedy ordered ground troops to Southeast Asia in the spring of 1962, the number of which he gradually increased until his death. There is no evidence to indicate any plan for withdrawal short of victory, the myth-making of Oliver Stone, Arthur Schlesinger, Jr. and so many others notwithstanding.

One way to get a handle on the JFK withdrawal myth is to recall another assassination in November of 1963, that of South Vietnamese dictator Ngo Dinh Diem. For much of 1963, Diem threatened to undermine empire’s goals by pushing for a negotiated peace with the NLF and a U.S. withdrawal. In response, Kennedy did what his kind frequently do in such circumstances: he authorized a hit on Diem and replaced him with generals willing to follow orders.

For all the wishful thinking about what Kennedy would have done in Indochina had he lived, the inescapable truth, as opposed to the fantasy, is that he escalated the war and initiated increasing levels of terror that eventually resulted in the deaths of millions. Significantly, there is no mention of withdrawal short of victory in the many Camelot memoirs, biographies and histories until after the tide had turned dramatically against U.S. aggression. Only then did the myth of “Kennedy the Peacemaker” emerge.

Perhaps the JFK cult can be explained by the odious legacies of his two immediate successors, Lyndon Johnson and Richard Nixon, both of whom massively escalated the carnage in Indochina and ultimately abdicated in disgrace. Odious their legacies may be but there’s no way around the fact that Kennedy’s legacy smells just as foul. Such an explanation also obscures the fact that it was Kennedy who established the terms for the domestic conflict that would rage throughout the 1960’s – outraged hostility on the part of the ruling class to the democracy movements that shook the empire to its foundations. It is those movements that will be remembered and celebrated long after the JFK cult hopefully, eventually, finally, finds its rightful resting place in the proverbial dustbin of history.

Andy Piascik is a long-time activist and writer for Z, Counterpunch and many other publications. He can be reached at [email protected]

One thought on “The Ongoing, Never-Ending JFK Mythology”