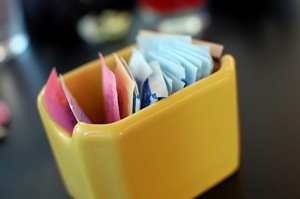 YESTERDAY– Americans constantly obsess over the latest diet fads and skinny trends, yet we’re one of the unhealthiest nations on the planet. According to the US Surgeon General, obesity plagues more than 30% of Americans- killing over 300,000 people every year.

Heart disease, cancer, and diabetes are also on the rise, with one of the main culprits in this disturbing trend being sugar. Almost 20% of our daily calorie intake comes from refined white sugar, working out to about 150 pounds of sugar per person per year.

Consumed in small amounts, sugar actually helps your metabolism and supplies a quick boost of energy. In excess, sugar adds nothing but empty calories to your body. Many people have recognized this and now opt for sugar free alternatives, allowing for the rise of the artificial sugar industry.

The most prevalent artificial sugar in our food supply today is called aspartame, which is also recognized as Equal or NutraSweet. Aspartame has made its way into more than 6,000 products including almost all diet sodas, chewing gum, frozen desserts, yogurt, and even vitamins and cough drops. 200 hundred times sweeter than sugar, aspartame is a combination of two amino acids: aspartic acid and phenylalanine.

Although aspartame is affirmed as safe by the Food and Drug Administration (FDA), they receive more complaints about adverse reactions to aspartame than any other food ingredient in the agency’s history.

At least 30% of the US population is sensitive to even moderate doses of aspartame and may suffer symptoms such as severe headaches, dizziness, attention difficulties, memory loss, throat swelling, and seizures. Long term effects include blood sugar problems, insomnia, diabetes, ovarian cancer, and brain tumors.

One 2002 study from Kings College found that the more NutraSweet is consumed, the more likely it is for brain tumors to develop. A Washington University School of Medicine report from 1996 found aspartame to be the “most likely suspect” for the striking increase in malignant brain cancer in the years following its approval. Disturbingly, the FDA ended up approving this chemical posion as unequivocally safe for human consumption despite alarming evidence to the contrary.

Aspartame was first patented in the mid 60s by drug company G.D. Searle, which was later bought by Monsanto and then spun off into the NutraSweet Co. Initially, the FDA approved aspartame, but after finding glaring inconsistencies in Searle’s testing data, the administration revoked its approval. The FDA commissioner at the time declared the tests “at best… sloppy,” saying that they revealed a “pattern of misconduct which compromises the scientific integrity of the studies.”

Dr. Erik Millstone, food safety expert at the University of Sussex, details how flawed Searle’s tests really were. For example, rats had died during the course of an experiment for reasons that were never explored, and tumors that appeared in the rats during the study were simply “cut out and discarded.” According to Dr. Millstone, the tests were so inconsistent that there is no way to be sure of aspartame’s safety.

The flurry of debate about Searle’s tests incited the FDA to establish a Public Board of Inquiry, comprised of independent scientists to rule on safety issues surrounding aspartame.  In 1980, the Public Board of Inquiry concluded that NutraSweet should not be approved, pending further investigations of brain tumors in animals. Searle then sued the FDA for retracting its approval of the product.

When Ronald Reagan became President the following year, his transitional team included Donald Rumsfeld, CEO of Searle, the company that manufactured aspartame. Reagan  then handpicked Dr. Arthur Hull Hayes Jr. to be the new FDA Commissioner.  In one of his first official acts, Hayes overruled the Public Board of Inquiry’s recommendations and authorized aspartame in dry foods and carbonated beverages.

In 1983, aspartame quickly flooded the market despite urges by the National Soft Drink Association to delay its approval for carbonated beverages because of its instability in liquid form. When liquid aspartame reaches temperatures above 85 degrees Fahrenheit, the heat breaks down known toxins, and side effects become worsened. There is an enzyme that converts the methyl alcohol into toxic formaldehyde in both the human brain and breast, causing symptoms that mimic multiple sclerosis and Alzheimer’s disease. Even in low doses, aspartame can damage the brain’s memory proteins.

FDA commissioner Arthur Hull Hayes ended up leaving the FDA under allegations of impropriety and took a position with Burson-Marsteller, the chief public relations firm for both Monsanto and G.D. Searle, revealing his blatant ties with aspartame’s manufacturer.

Even in the face of its sordid past, weight-conscious Americans will still likely opt for products containing aspartame because it’s marketed as a weight loss aid. Ironically, studies have shown that it actually increases appetite and sugar intake because the empty sweetness from artificial sugars makes your body expect food and you end up craving more.

Recently, many people are jumping on the sucralose, or Splenda, bandwagon. Splenda is a competing artificial sugar that claims it is made from “real sugar.” This is true- to an extent. Sucralose is produced by adding three chlorine atoms to a sugar molecule. The FDA maintains the position that your body doesn’t actually digest the chlorine, but studies from Japan have shown that your body can digest up to 27% of it. Other potential effects of sucralose consumption include cancer, limb paralysis, infertility and breathing difficulties.

You are probably wondering what your options are once you remove refined white sugar, aspartame, and sucralose from your diet. The good news is that there are natural and healthier options. Honey and agave are two natural sweeteners that can be found in any local supermarket.

However, if you are still looking to cut calories then Stevia is the way to go. Stevia is a sweet herb that has been used as a natural sweetener in South America for the past 1500 years. It is non caloric and is 25 times sweeter than sugar. Tests have shown that Stevia intake actually helps regulate blood sugar, inhibit tooth decay, aid mental alertness, improve digestion, and users of Stevia even report less desire to smoke tobacco and ingest alcohol! Today, Stevia is finally on the market after a decade long FDA ban due Aspartame’s heavy lobbying influence.

Here is a an investigatory video report I did about artificial sugars.