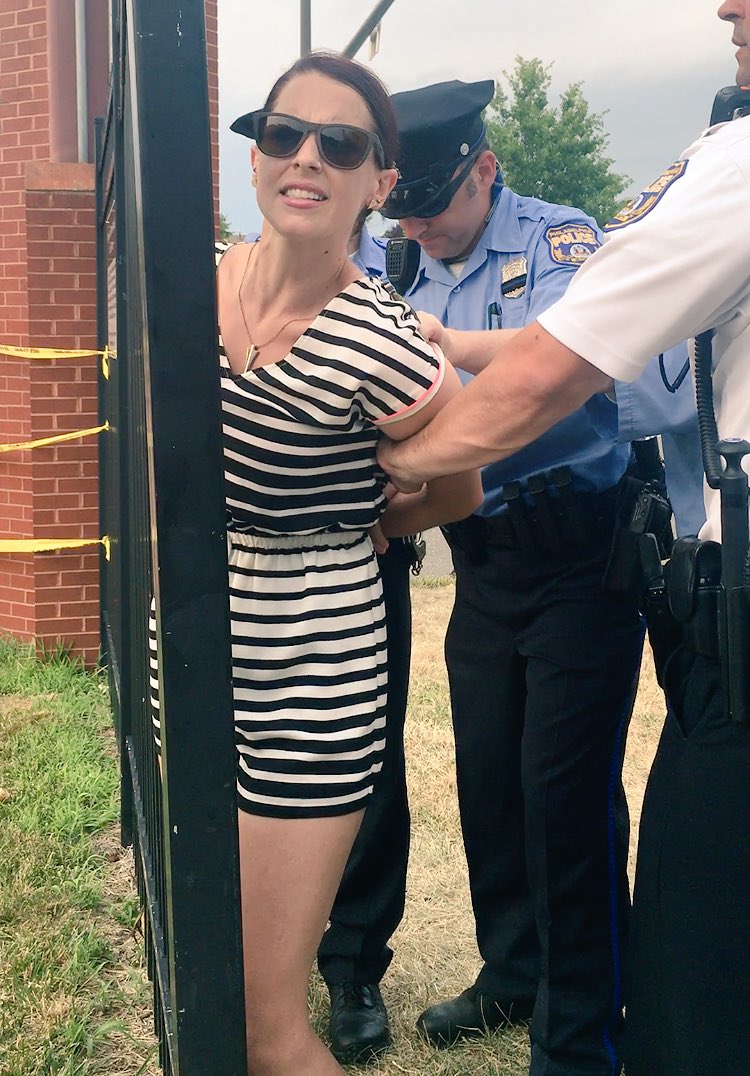 In case you were wondering how Philadelphia police compared to those in Cleveland, journalist Abby Martin was willing to share the details of her own arrest at the Democratic National Convention this week.

“They use this tactic of unlawful mass detainment where they can just sweep people up for hours,” Martin revealed, regarding the police at the DNC. “They do this for sometimes days and then release people with no charges, essentially other than the citation and then just say no arrests were made, our hands are clean, but at the same time, it’s so abusive, what’s happening.”

Martin is a producer for “The Empire Files.” She was arrested on her way to an action and put in custody soon after. Martin described the entire incident as “unreal.”

“My partner Mike and I, a producer for ‘Empire Files’ were trying to get to this action where there was massive civil disobedience arrests happening,” Martin began. “It was at a public park away from the convention center. We got dropped off in a parking lot, tried to get to action, roads are blocked, the train stations were closed, the police are making it difficult as possible to even get to this action.”

After realizing they were fenced in a parking lot, Martin asked a cop how she could get out.

“He said go to this exit. Completely complying with police orders, we walked toward the exit about five feet from the exit [where] another female police officer came up said, Where’s your credentials, you have to have credentials to be in this area. We’re credentialed journalists, but we weren’t credentialed to be in the DNC,” Martin explained.

That didn’t seem to fly with the police.

“As my partner was telling her this, she grabbed my shirt very aggressively, my dress, ripped it and said ‘arrest her to these other two officers were standing at the entrance, and she said, ‘arrest her for disorderly conduct,'” Martin said.

Martin was in shock. But that was just the beginning of her ordeal.

“They twisted my arm extremely hard, my wrists were in excruciating pain, they zip-tied them as close as they possibly could, very very awful experience aggressively, manhandled by three police officers were on me on this fence,” Martin recalled. “I didn’t even see any arrests happening, it was just so shocking, it was so random, I was just stunned and I kept saying ‘we’re credentialed journalists, we were told to come here by another police officer’ and so they carry me to the paddy wagon, totally separate from my producer, I had no idea what’s going on, I just thought ‘I’m spending the night in jail’ and I was just trying to accept my fate and how unreal what was happening was.”

This post was reprinted from Alternet. Watch Abby’s testimony here.

The official line from the police is that “no one has been arrested” at the Democratic National Convention, but that couldn’t be further from the truth.  Protestors and journalists are being rounded up, handcuffed, booked, and cited all over the city of Philadelphia, and Empire Files host Abby Martin was one of the victims. Ring of Fire’s Farron Cousins was lucky enough to speak with her about her experience.

ROF Exclusive: Abby Martin Discusses Her Arrest at the DNC

I also discuss the story in depth with my brother Robbie on the latest Media Roots Radio.